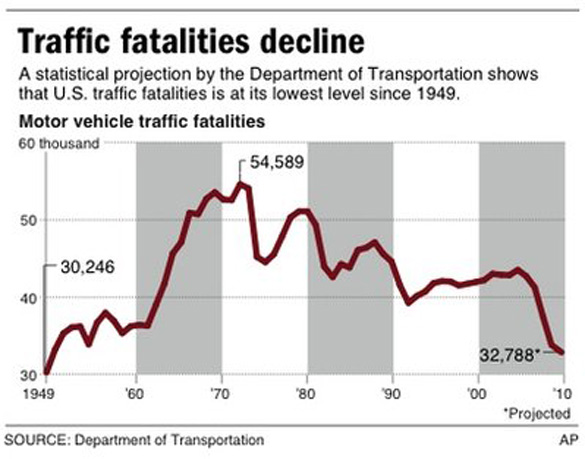 The Department of Transportation has recently estimated that the number of people killed on U.S. roads in 2010 decreased to the lowest level since 1949.

The fewest number of deaths since 1949, estimated at 32,788 people, have been reported on America’s roads for last year. The level is at its lowest in more than 60 years where much of the credit is given to the technological advancements in vehicle safety.

What is interesting about the Department of Transportation findings, resulting in the lowest estimated fatality rate in any given year since 1949, is the fact that Americans spent more time in their vehicles and traveled more miles in 2010 making the estimates very noteworthy. The number of miles traveled by Americans in 2010 was up by 0.7% from the year previous year (2009) accounting for a growth of 20.5 billion miles.

“It’s a really good sign that fatalities are down despite the fact that (vehicle miles traveled) is up,” said Barbara Harsha, executive director of the Governors Highway Safety Association.

Other contributing factors have been states that were more vigilant on drunk driving resulting in a fall of Alcohol-impaired driving fatalities by more than 7% in 2009 vs. the previous year (2008). Seatbelt use, also up to an all-time high of 84% in 2009, is another contributing factor to the decline in recent highway deaths.