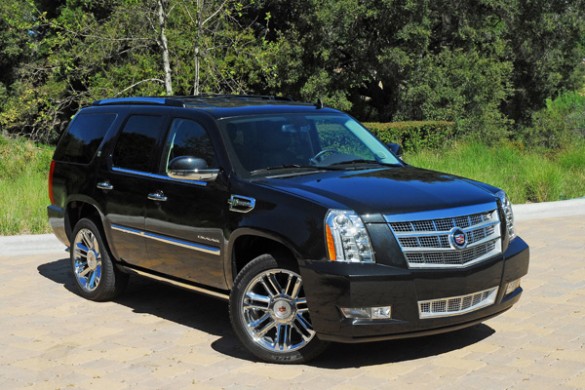 Already the best selling full-size luxury sport utility on the world-wide market, Cadillac marks the 2011 model year by introducing a very special, limited-edition ‘Platinum’ Hybrid with even more luxury inside, more style outside and more technological features under the skin.

Cadillac’s innovative Escalade Hybrid is the world’s first hybrid full-size luxury SUV.  It achieves an EPA rated 20 miles per gallon in the city, up to a 33% fuel economy improvement over the non-hybrid model, and 23mpg/highway.

Providing power to the hybrid’s electrically variable transmission’s two electric motors is a 300-volt nickel-metal hydride Energy Storage System.  This battery pack is under the second-row seat, where it takes up virtually no additional space and does not interfere with second-or third-row entry or exit.

Additional features of the hybrid powertrain and supporting systems include: a fully blended regenerative braking system that captures energy that would otherwise by lost during vehicle deceleration; a 6.0 liter V8 engine with Active Fuel Management and late intake valve closing (Atkinson-cycle combustion process) for reduced pumping losses and better overall fuel economy; the engine is rated 332hp at 5,100rpm and 367lb.ft. of torque at 4,100rpm, and runs on regular unleaded gasoline; an Auto Stop Mode comes into play when the vehicle reaches 0mph, the gasoline engine may automatically shut down, leaving the engine off there by conserving fuel and emitting no tailpipe emissions; at low speeds such as during city driving or heavy stop-and-go traffic, the hybrid may use only electric power, and when engine loads permit the hybrid uses both engine and electric power sources to move the vehicle; an exhaust system and resonator specially tuned for the 6.0 liter LIVC engine’s Active Fuel Management operation that ensures comfortable interior acoustics and a pleasant exhaust note during both V4 and V8 operation; an electrically driven, 300-volt AC compressor reduces vibration and allows the HVAC system to cool the passenger compartment even when the gasoline engine is shut off, it includes the standard tri-zone climate control system; an electrically driven, 42-volt variable assist, rack & pinion power steering system reduces vibration and provides up to a 0.5mpg fuel economy improvement by reducing parasitic losses common in belt-driven hydraulic systems; the Energy Storage System cooling system’s internal fan is tuned to be quiet at low vehicle speeds, when occupants could more easily hear it; the Escalade’s Hybrid’s battery pack durability and reliability are maintained via optimized charge and discharge cycles, as well as a dedicated cooling system that draws air from the passenger compartment.  The vehicle’s emission control system, hybrid drive line and the energy storage system are warranted for eight year/100,000 miles. 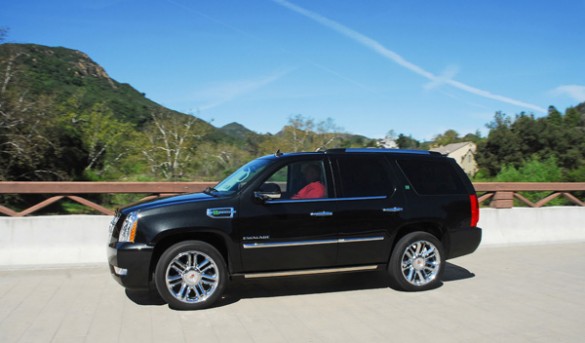 When behind the wheel you never notice any of the hybrid or gasoline engine components at work.  All is silent and seamless as it switches between electric and gasoline/electric power modes.  What could be simpler in saving fuel and cutting down on emissions? 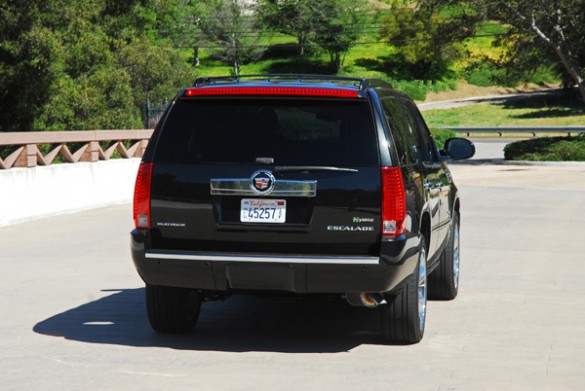 Under the skin is GM’s exclusive Magnetic Ride Control system first seen in the Corvette that gives the Escalade Platinum more precise body motion control.  It is a real-time damping system-reading the road in millisecond intervals and changes damping in just 5 milliseconds.  It replaces conventional mechanical-valve shocks with electronically controlled shocks filled with a magneto-rheological fluid containing minute iron particles.  Under the presence of magnetic charge, the iron particles align to provide damping resistance almost instantly.  This high-tech feature gives the Escalade Platinum a smoother ride over poorly paved road surfaces and keeps body lean to a minimum during hard cornering.  It is also seamless and non-intrusive as you steer the Escalade during straight-line cruising on the freeway or when in the mountains slicing through curving roads.

Inside the Escalade Hybrid Platinum is the latest example of Cadillac’s 21st. century return to handcrafted luxury detail.  The instrument panel, center storage console and door trim are all leather wrapped.  They feature decorative French seams that convey an elegantly tailored look and feel.  Materials include rich leather on the instrument panel, with olive ash and walnut burl wood inlays, chrome and aluminum trim. 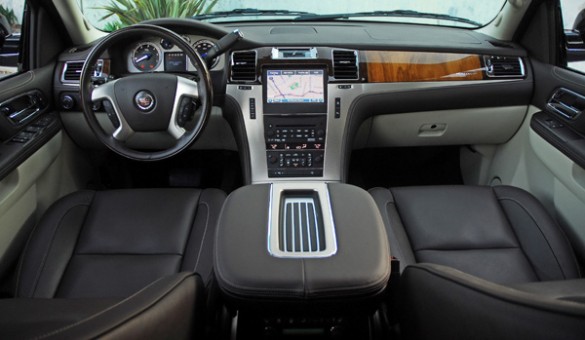 Tehama aniline leather is unique to the Escalade Hybrid Platinum and is used to fully trim the first-and second-row seats.  Contrasting-color stitching is used on the French seams for a distinctive, luxurious appearance and the seatbacks feature embroidered Cadillac wreath and crest insignias.  The leather-covered seats are comfortable and convenient, with the industry-exclusive fold-and-tumble second-row feature that eases access to the third-row seat.  Additional Escalade Platinum standard interior features include Platinum-specific aluminum door sills with a  rear Platinum Escalade plaque just ahead of the step-up bumper, floor mats front/rear/cargo area; a heated, power tilting, leather/wood steering wheel; heated and cooled cupholders and a power liftgate that opens and closes with the touch of a button.  Also, the DVD entertainment system adds screens integrated into each front-seat headrest, in addition to the exiting roof-mounted screen.  Each front-row headrest screen has its own driver and input controls.  The headrest units can be operated independently or in tandem.  This system enables passengers in different seats to watch or listen to different entertainment choices.  Escalade Hybrid Platinum models also include the acclaimed Bose 5.1 Digital Surround system, as well as the eight-inch touch screen navigation and control of the DVD, CD, MP3 and XM satellite radio entertainment.  The pull-down eight-inch color screen in the middle of the headliner in the 2nd. row gives rear passengers 3-separate DVD’s to watch.

The ninth-generation OnStar technology has been revised and is more flexible with a voice recognition system now smart enough to interpret different sentences/phrases without actually hearing the exact 2-3 word commands from the user.  For example, if a subscriber wants to place a call using the Hands Free Calling System, if they simply say, “I would like to place a phone call” or “Need to make a phone call,” instead of saying the exact “dial” or “call” command, the system will understand that the user wants to place a call and process that command accordingly.  The system is capable of recognizing thousands of sentences that user may say. 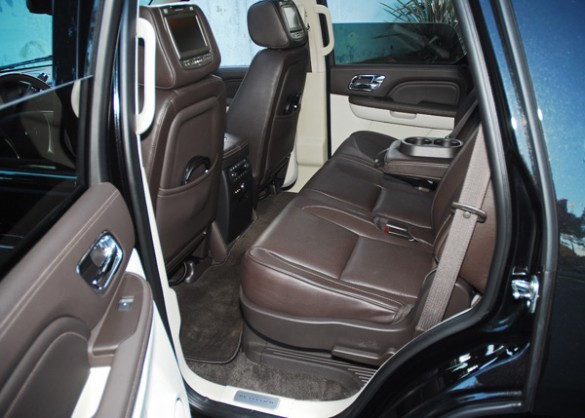 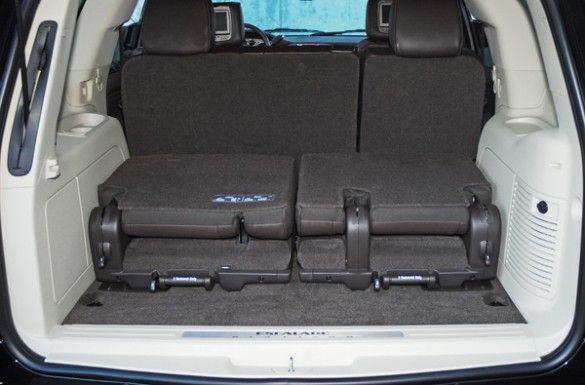 The new, limited-edition Platinum Escalade Hybrid is one of the best and most efficient full-size sport utility vehicles available.  It has all of the ‘state-of-the-art’ features that you come to expect from Cadillac, plus a more efficient powertrain stretching you fueling needs.

The price for this fully-loaded Escalade Platinum Hybrid model is $88,140.00, and well worth it if it is the way you want to roll.