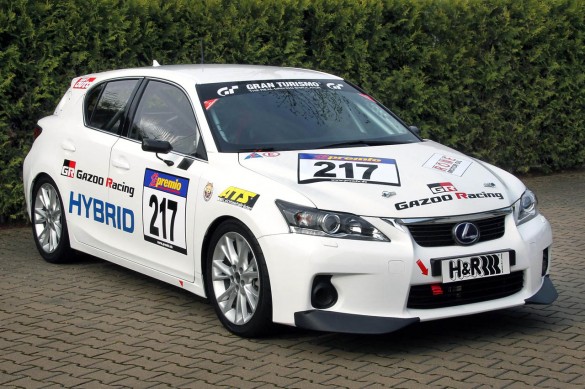 After reviewing the 2011 Lexus CT 200h just last week, I would have never guessed that it had the potential of being an actual race car. But despite my thinking, Toyota-backed Gazoo Racing has transformed the CT into a race-prepped Nürburgring-ready Hybrid.

This year Gazoo Racing will be racing their Lexus CT 200h at the Nürburgring for the Adenauer ADAC Rudstrecken-Trophy. The Lexus Gazoo Racing CT 200h is almost bone-stock, with the exception of the 1.8-liter gas engine being replaced by a more powerful 2.4-liter unit and added safety equipment. It is quite possible that this will pave the way for a ‘faster’ Lexus CT 200h hybrid. Full press release below.

Full hybrid set to take on the Nürburgring

The legendary Nürburgring will host the racing debut of Lexus’s full hybrid CT tomorrow (14 May) when the luxury hatchback lines up on the starting grid for a gruelling endurance race.

Primed by Gazoo Racing, the motorsport specialists responsible for the racing Lexus LFA, the CT is competing in the Adenauer ADAC Rundstrecken-Trophy, contested over six hours on one of racing’s most daunting circuits. Almost 200 cars are expected to line up for the start.

Competing in the SP4 Class, the GAZOO Racing CT, like its road-going sister CT 200h model, features Lexus Hybrid Drive, but with a higher capacity 2.4-litre petrol engine instead of the usual 1.8 unit. The batteries and hybrid system are identical to the road car. At start-up and under braking, the race car uses just its electric motor, producing zero tailpipe emissions and using no fuel. The combustion engine seamlessly takes over at higher speeds with the electric motor providing extra power when accelerating and at racing speeds.

Throughout its operation, the Lexus full hybrid system intelligently selects the most appropriate power source and also captures energy through regenerative braking to charge the battery, which in turn powers the electric motor.

Thanks to Lexus Hybrid Drive, the GAZOO Racing CT will require less fuel and will emit lower levels of CO2 and harmful NOx than any equivalent petrol or diesel race car.

Lexus remains the only car manufacturer to compete in major endurance races with full hybrid cars, starting with the Lexus RX 400h which contested the Nürburgring24 Hours in 2005.

The GAZOO Racing CT driver line-up features three experienced pilots: Kumi Sato, a female racer who competed in a Lexus IS 250 in 2008; Masahiko Kageyama, who previously supported Toyota’s vehicle development programme; and MinoruTakaki, who is responsible for production vehicle development.