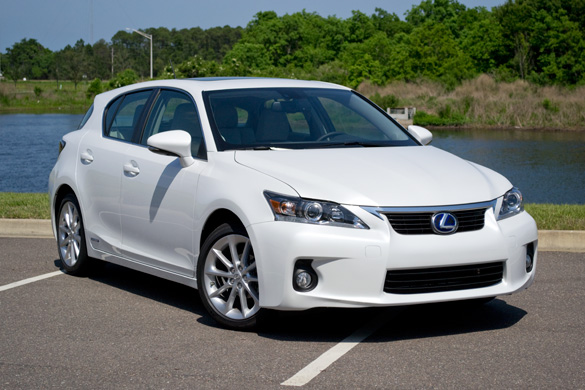 The new Lexus CT 200h is the most fuel-efficient luxury branded vehicle on American roads today so far. With an EPA estimated fuel economy rating of 40mpg highway and 43mpg city, the CT 200h outdoes the Lexus HS 250h’s combined fuel economy of only 35mpg. The new CT 200h is sportier than the HS 250h by sitting a bit lower and wider. Not to mention, the CT 200h is a hatchback form that may appeal to some as being a sports wagon. This could be a good thing for Lexus considering wagons are making a comeback in the American car culture.

The new Lexus CT 200h has a refreshing exterior style that is undoubtedly sporty encompassing the typical L-finesse look found in the full Lexus lineup. The low-slung hood and front bumper closely resemble the good looking and sporty Lexus IS. New LED daytime-running lamps add to the luxury style on the front end.  The rear has LED taillamps with red and clear lenses that blend well with the small rear hatch and valence bumper. 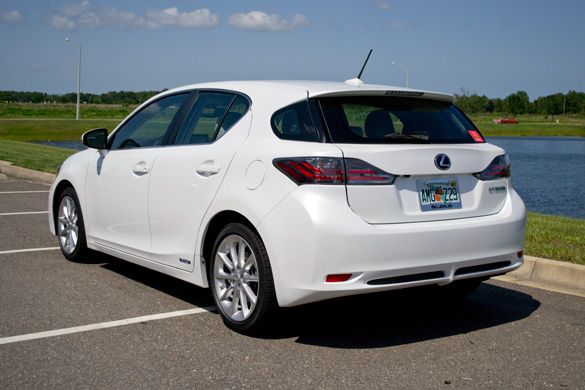 The new Lexus Hybrid Synergy Drive shows its sophistication in noticing that Toyota has obviously improved upon the system over the years. It has gotten to the point that power transitioning from the electric motors to the gas engine is a seamless action rather than an abrupt hesitation found in some previous generation hybrid vehicles. Although the power transition is still very noticeable to someone like me, many consumers should not have any complaints when the system starts up the gas engine for added power. Just as in the HS 250h, the CT 200h gets a little eardrum-busy from the buzz sounds of the 4-cylinder engine when you need the added power or when you are aggressively accelerating to interstate speeds. The Hybrid Synergy Drive is smart and attempts to figure out what your next move is to provide the optimal performance and fuel efficiency at the same time. 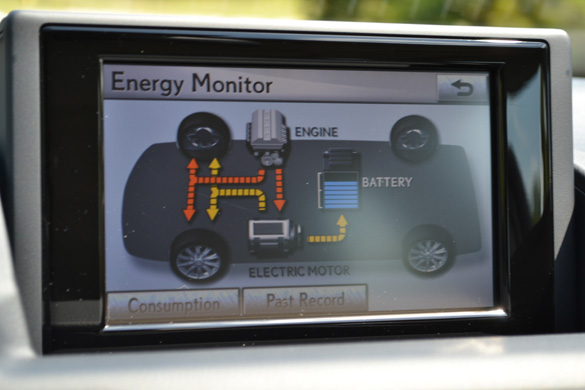 The CT 200h can be driven in full electric mode, or EV mode (full Electric motor powered mode), up to 27 mph. EV mode can be switched on only in situations where the ECU senses the optimal conditions such as speed, load, and throttle position. EV mode will automatically cancel out if full throttle is applied, speed exceeds 27mph or the battery is near full depletion. However, under many normal driving conditions while in normal or eco driving modes, EV mode may be implemented automatically by the ECU for brief moments if certain conditions are met. These are the times that the CT 200h really gives you a boost in fuel economy such as when you are about to come to complete stop or you are coasting down a hill. Another case where EV mode is automatically turned on is when you ease on the throttle slowly accelerating. I found EV mode kicking in several times when travelning at low speeds in heavy traffic. Start-Stop technology is always in play shutting off the gas engine on every complete stop that I made. The system would even keep it in EV mode up to about 43mph provided you were not accelerating hard. The gas engine would naturally turn over if I went any faster. 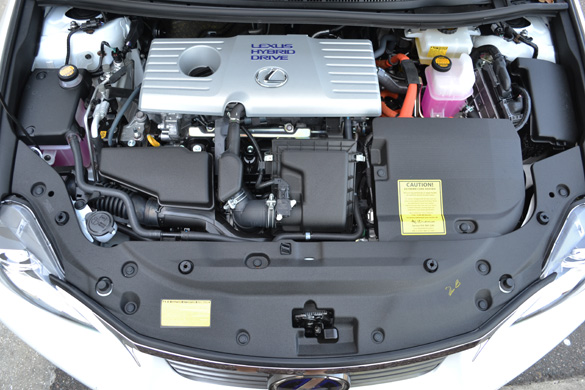 Power is directed to the front wheels through a planetary set of gears in the Continuously Variable Transmission. The two electric motors provide 36 horsepower while the 1.8-liter 4-cylinder engine puts out 98 horsepower for a combined 134 horsepower. The electric motors assist in providing some form of instant torque, which makes the CT 200h feel peppy off the line. It is during the gas engine’s high-pitch struggle to reach redline where the CT 200h falls a little short of providing decent acceleration. 0 to 60 mph time is just over 10 seconds, which is, hate to say it, pretty slow. Despite its acceleration time, the CT 200h still has some sporty appeal. Just like the Lexus IS 250, the CT 200h handles well enough to have another 100 horsepower under the hood without upsetting its handling abilities. But that is not what a hybrid is all about. It is about being fuel efficient, and that is exactly what the CT 200h is. 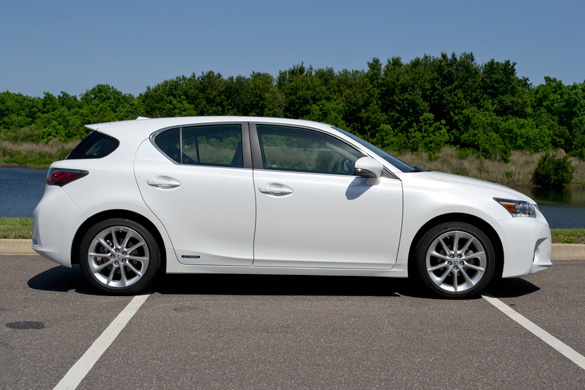 Sport mode in the CT 200h advances throttle position and provides the driver with an RPM gauge in the cluster. In sport mode the CT 200h does come alive allowing the driver to better manage power delivery instead of stabbing the gas pedal every time you attempt to pass a car on the highway. Steering feel is numb and lifeless but somehow that didn’t surprise me considering the CT 200h uses an efficient electric-assisted steering system. 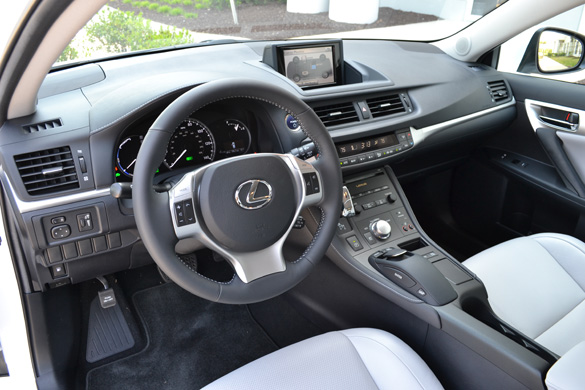 The Lexus CT 200h’s interior is very similar to the HS 250h’s. My CT 2004 Premium test vehicle was equipped with the navigation system package, which adds Lexus’ innovative controller similar to a computer mouse. It does take a while to get used to the controller but the motorized magnetic feedback you get on the controller when your pointer rolls over a button, aids your learning process.  Additionally, the feedback helps keep your eyes on the road where they should be instead of the on the ‘mouse pointer’. After you spend about 20 minutes with the system, things get easy to control. Layout of the dashboard is in typical Lexus fashion. The fit and finish may be a step lower than found in other Lexus vehicles possibly due to using more lightweight components, but nevertheless, you feel surrounded by quality craftsmanship. The heated leather seating surfaces up front are comfortable and provide good lateral support. Rear seating area is a bit cramped and not very friendly for individuals over 6-feet tall.

Visibility inside of the CT 200h is excellent facing forward but somewhat questionable for viewing blind spots until you are completely familiar with where the body panels meet the glass in the rear hatch area. The same can be said when looking out of the rear window due to its relatively small size. 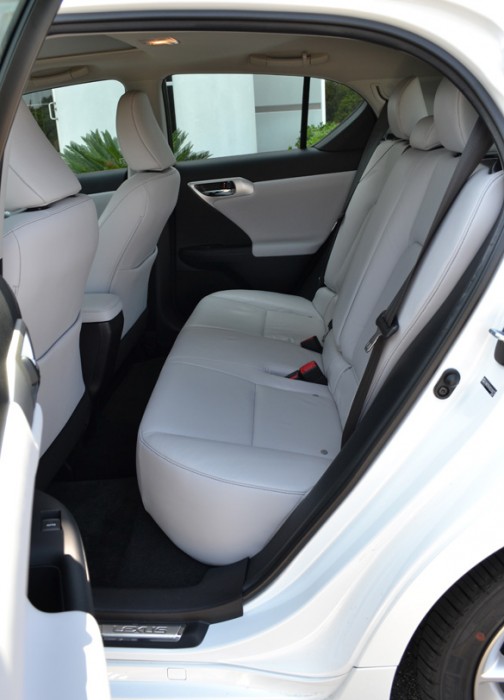 The Lexus CT 200h was exceptional in the area of being fuel-efficient during one of my longer trips. After all, it is a hybrid. I was able to best the EPA mpg figures in several occasions in eco mode yielding an average of 45.5mpg during a 50 mile trip consisting of 60% highway and 40% light-traffic city driving. All-things-efficient were thought of in the development and design of the CT 200h. Low rolling resistant tires, an aerodynamic body design, small amounts of regular 87 octane fuel and of course the famous Hybrid Synergy Drive, make the CT 200h the most fuel efficient luxury hatchback aimed at young buyers on the market.

All together, the R&D put into the Toyota Prius has allowed Lexus to create a sports-luxury hybrid that does not compromise drivability for economy. Lexus has been into the game of creating industry firsts and the CT 200h is another notch in the belt for Lexus in this department. The Lexus CT 200h is the first hybrid to rival with hatchbacks such as the Audi A3, Volvo C30 and BMW 1-Series, which appeal to young buyers. Will it capture that eco-friendly part of young buyers or the part that tells them to buy a sporty-looking vehicle? The Lexus CT 200h attempts to satisfy both of those desires. 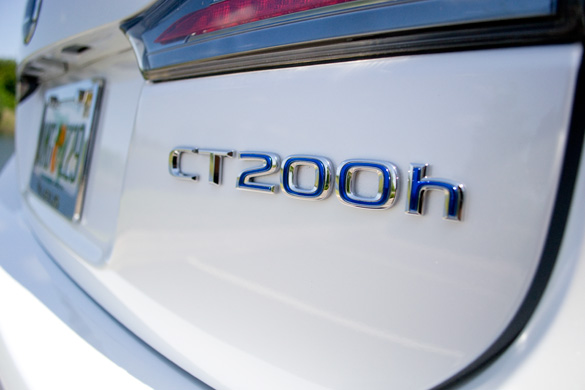