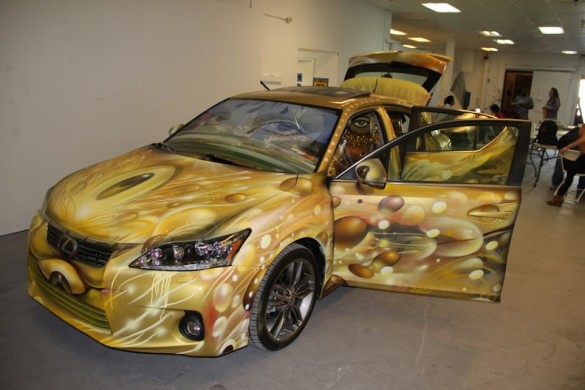 In an effort to help raise funds in support of the Self Help Graphics & Art Center in Eastern Los Angeles, CA, Lexus has partnered with the 40 year old initiative for a program called “Moving Expressions” in support of the center. In the exhibition, Lexus allowed internationally renowned aerosol artist Jamie “Vyal” Reyes and Patssi Valdez to ‘go crazy’ on a new CT200h hybrid vehicle used as a canvas.

The artwork will attempt to resonate with the hybrid nature of the CT200h with an evolution that speaks to the Latino community from East LA areas and others around the nation. Within the artwork, a combination of modern luxury and innovation come together to tell a powerful story.

The event kicked off on Friday, April 20th, to honor artists, leaders, and philanthropists who make extraordinary contributions to Latino Art and Culture.  The completed Lexus CT200h art piece was displayed at The Self Help Graphics & Art Feria and Awards Dinner, presented by Lexus, to help raise funds for this Chicano Arts center. Check out some of the exclusive images of the Lexus CT200h covered in Vyal’s very own artistic expression. 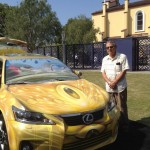 Jaime “Vyal” Reyes has been a graffiti artist for over 20 years and is considered one of the best in Los Angeles.  His work has been exhibited at museums and galleries including MOCA, and in more than 30 cities in the U.S. as well as international exhibitions in Germany, Mexico D.F., and most recently Israel and Palestine. Vyal leads a weekly workshop at Self Help Graphics & Art, teaching his techniques to youth and and mentoring young artists along the way.

Patssi Valdez is a national treasure.  Raised in East Los Angeles, Patssi came up as a young artistis with the help of the  Self Help Graphics & Art Center.  Patssi’s vivid, dream-like, colorful work is an expression of what is important to her and is symbolic of her as an individual in a collective experience.  As her talent is undeniable, she is the recipient of numerous prestigious awards including the National  Endowment for the Arts and J. Paul Getty Trust.  Her work is featured in several major collections including the National Museum of Art and Smithsonian Institution.  A groundbreaking retrospective of ASCO was recently on exhibit at the Los Angeles County Museum of Art as part of the Pacific Standard Time initiative. But even with all of that she finds inspiration from working with other artists like “Vyal” and participates in inspiring youth with her continued involvement with the SHGAC.