When Acura and Marvel Collide

The Destroyer about to take out some Acuras Image: Marvel Studios

It’s an undeniable fact that movies and product placement go together like peas and carrots.  Peanut butter and jelly.  Unicorns and glitter (just kidding).  These days, when I pay half my week’s salary, or roughly the GDP of a small undeveloped nation, to see a movie, I expect to be bombarded with a thinly veiled ad to buy something or another.  Often, it’s integrated cleverly into a scene like a character using a new flip-cam, cell phone or eating at a certain restaurant.  I clearly remember watching Twister and noting the the “bad guys” in their sleek, shiny long caravan of black…Dodge Caravans (I see what you did there, Marketing Department).  It seems modern movie-makers though are taking it one step further.  Thor, which recently debuted, features the entire Acura lineup and makes no bones about it.

Going so far as to advertise specifically Acura’s place in the movie (not the movie itself), several commercials were released in advance of the premier.  A press kit disguised as a S.H.I.E.L.D. “Assessment Test” would look more at-home on the brochure rack of your local Acura dealership.  (S.H.I.E.L.D., for the non-Marvel-geeks like me, is a fictional espionage and law-enforcement agency in the Marvel Universe from whence Thor came).  A few months ago, I had read a news story that the big A would be the “official” car of the movie, but I guess I was a bit taken aback when I started seeing how hard they were selling it via commercials and internet ads. 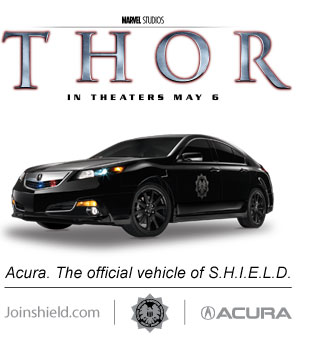 Like the guy at your local hangout who pulls up in a riced-out import tuner, wearing spiky hair, gold chains and a white tracksuit, the full-court press just made me shake my head and mutter “Epic fail, Mr. Try-too-hardy.”  True, I’m the cynical type, but I wondered if Acura would have felt the need to be so blatant if their last redesign had been more well-received.  You know, the one with the chromed-out grille that’s been called everything from a beak to a guillotine to a bagel slicer?  Yeah, that one.

I am curious to know if the general population (read: those who don’t live and breathe exhaust fumes, which explains a lot come to think of it) is yet aware of just how far Acura’s cache has fallen in recent years.  Like parent brand Honda, offerings have either been extremely polarizing or bland as plain oatmeal covered in weak sauce.  Worse, the cars themselves have been lacking in that important, intangible fun-to-drive factor that used to make the company shine above most others.  Many have asked why they should pay for the “Acura” nameplate when a fully loaded Honda can often offer the same level of luxury touches for less green.  Valid issues, all.  Are those reasons why Acura decided to pimp out their cars harder than a stage mom at a Little Miss Priss pageant?  Or did they just happen to score an excellent opportunity and are milking it for all its worth?  I suppose that’s for the target demographic to decide with their checkbooks, in whether or not Acura’s sales improve.

For what it’s worth, I audibly cheered when the ZDX and its prominent proboscis got destroyed in glorious, IMAX 3-D (although I still don’t think it was worth the extra $5 per ticket).