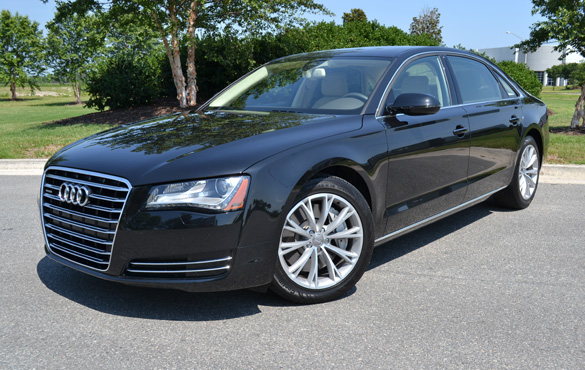 For years the Audi A8 has been considered by some to be an underdog, overshadowed by its German counterparts such as the BMW 7 Series and Mercedes-Benz S class. Every car enthusiast knows about the Audi A8 but chose to place it in a category of its own possibly because it was different from the norm or maybe it was the A8’s unknown character that kept others guessing. For 2011, the all-new Audi A8 is no longer shy about where it might have stood in the shadow of its competition’s sales figures because it’s now poised and ready to take them head on.

In a new automotive era everyone has brand new expectations. The all-new 2011 Audi A8 enters its third generation built on a modern platform incorporating an aluminum space frame, an intricate multimedia interface, and Audi’s touted Quattro all-wheel-drive system. 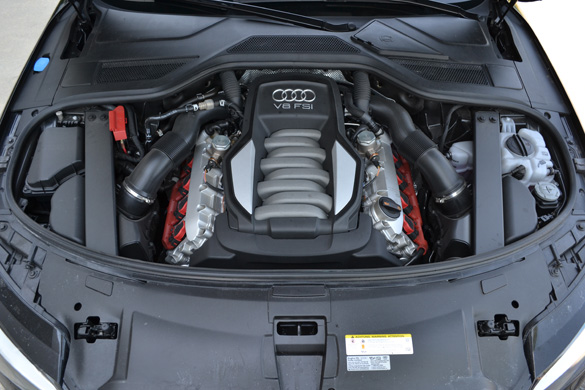 For this year Audi has decided to utilize their freshened 4.2-liter direct injected V8 engine, capable of outputting a respectable 372 horsepower and 328 ft-lbs. of torque. That is enough grunt to move the relatively light-weight A8L (L for long wheelbase) from a standstill in 6.2 seconds. Do not let the horsepower numbers fool you; the A8L is athletic even in a straight line due in part to its light-weight aluminum construction, which does not sacrifice weight for body rigidity. The 2011 A8 has 25% more static torsional rigidity than outgoing models thanks to new welding technologies. 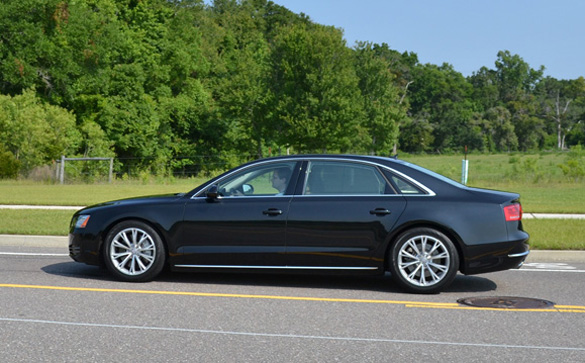 The new 2011 Audi A8L delivers on performance, luxury, and efficiency. When you look at other vehicles down the line all the way up to the flagship A8, it’s obvious that Audi is goal oriented in these areas. The new A8 carries the pride of Audi well with unmistakable design elements such as the large and low-slung grill and LED day-time running lights for example. On the rear, the sleek lines flow in a traditional style ending at the tail-end with modern-Audi LED tail lamps. My test vehicle was equipped with the standard HID headlamps instead of the optional advanced LED headlights. 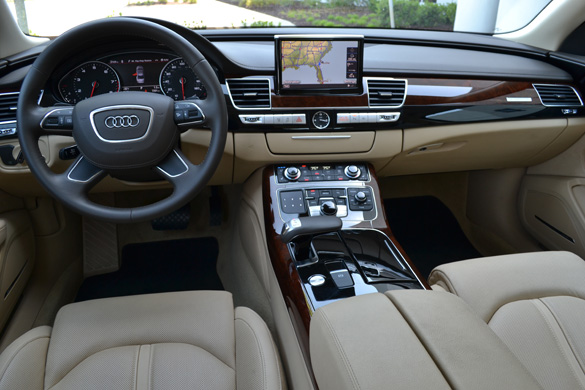 On the inside you will a spacious and luxurious cabin surrounded by fine materials and enough gadgetry to keep the driver and passengers pleased. If the plush interior is not enough to keep occupants intrigued, then possibly the space-age ambient lighting will do the trick. The new Audi A8 features private Jet-like interior ambient lighting with driver-selectable LED lighting themes. The themes come in various colors that can be selected through the MMI (multimedia interface) vehicle settings. 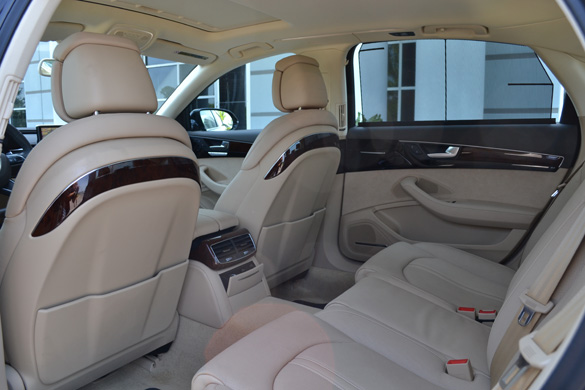 Coupled with the advanced interior lighting is more than enough room for 5 passengers especially when it comes to the rear seating. Because my Audi A8L is the long wheelbase version, it adds an additional 4.2-inches of legroom over the standard wheelbase A8. You could basically melt in the backseats of the new Audi A8L and put yourself in a calm state of serenity for several hours with no issues. Not to mention, the Audi A8L literally rides on air though its adaptive air suspension system. The A8L’s suspension system is impressive and at the same time very functional in providing the A8 with a well-balanced demeanor on virtually any paved road surface thrown at it. 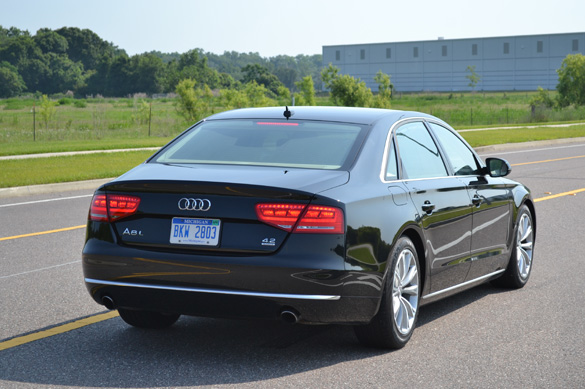 The Audi A8L’s adaptive air suspension system allows the driver to choose between comfort, automatic, and dynamic modes. These modes are selected via Audi’s Drive Select system, in conjunction with other car settings such as the steering and throttle response. In dynamic mode, the A8L will lower the ride-height, tighten the dampers, sharpen throttle response, and provide a heavy steering feel. The steering feels somewhat artificial at times although the A8 does not disconnect you from the road as much as a Lexus LS.

At times, the Audi A8 attempts to defy the laws of physics, but in a civilized manner. The performance capabilities of this large land-yacht were surprising. The Quattro all-wheel drive added to the sporty feel, never losing its grip on wet surfaces to the point of upsetting the A8L’s balance under hard acceleration. 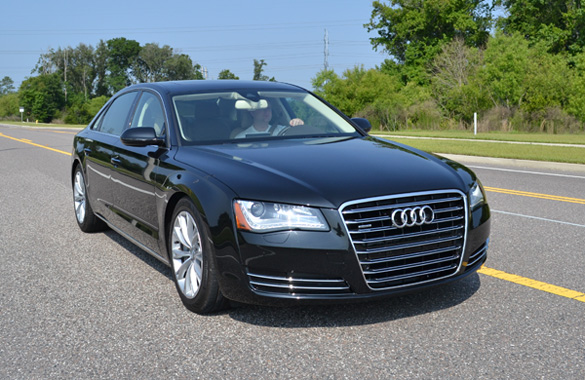 One would be well pleased with the smooth and well-damped ride of the Audi A8L. In automatic Drive Select mode, the 8-speed tranny had some hesitation when full throttle was demanded.  However, the new 8-speed transmission is one of the smoothest on the market and very competent when in dynamic mode. The Audi A8 easily rivals the Benz S550 in ride quality and is more road-proficient than the Lexus LS.

Riding in the lap of luxury should never be a compromise between efficiency and road manners. One would not have to worry driving the new Audi A8L because both the A8 and A8L offer an adequate 17mph city and 27 mpg on the highway. The 4.2 FSI V8 engine, 8-speed transmission, and light-weight body all play a major role in having the lowest EPA-estimated annual fuel cost of any large luxury cars. Even the hybrid version of the Porsche Panamera and Benz S-Class match the Audi A8’s EPA estimates. 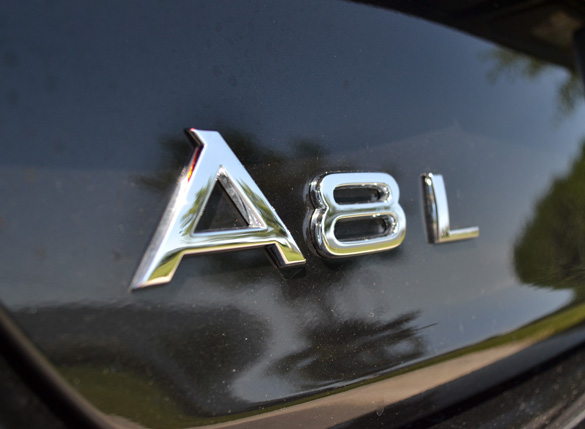 There was a reason the Audi A8 was the chosen vehicle in Transporter 2 and Transporter 3 movies. You, like me, probably wondered why in the world would anyone tout the performance capabilities of a big luxury vehicle in an action-packed movie. That’s like putting the lightweight champion of the world in the ring with a sumo wrestler.  It just does not seem logical. But Audi defies logic in the sense that their new A8, despite its previous underdog reputation by some, can easily play along with everyone else in its class without breaking a sweat. Simply stated, the new 2011 Audi A8L is “Vengeance of an Underdog”.