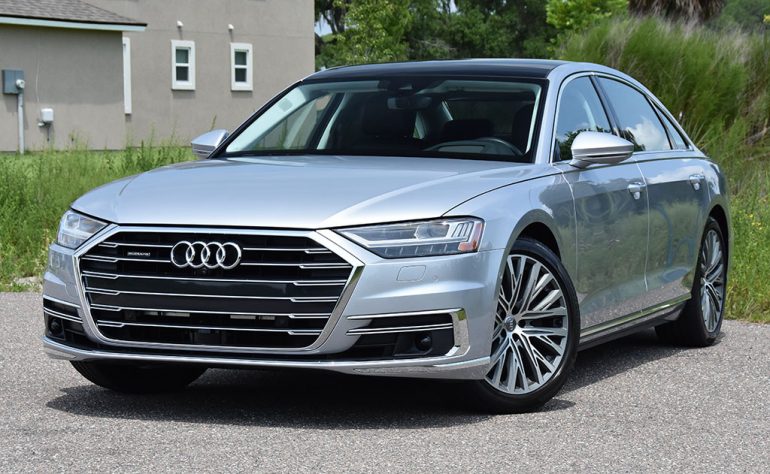 The A8, Audi’s largest sedan, has always been somewhat of an underdog in the scheme of full-sized luxury sedans. However, the A8 is a well-known vehicle that is always deserving of a look for those who are not set in their ways with other large luxury sedans. The latest A8 redesign for the 2019 model year latches onto today’s tech to introduce a commendable competitor in a segment that is slowly giving way to large SUVs.

>> Get the best price on the Audi A8L from a network of local dealers now. <<

The new 2019 Audi A8 in its A8L long-wheelbase form, currently the only variation available, is quite the comfy cruiser. The new A8 takes on a new approach that many vehicles are following where the engine is smaller but often assisted by either forced induction or a hybrid system. In the case of the new 2019 A8, the large luxury sedan gets help by way of a turbocharged V6 engine and a mild-hybrid system that is good for 335 horsepower and 369 lb-ft of torque, which is the only powertrain option at the current time. The engine, combined with a mild-hybrid system, gets mated to an 8-speed automatic transmission. Audi is said to have a V8 option later. 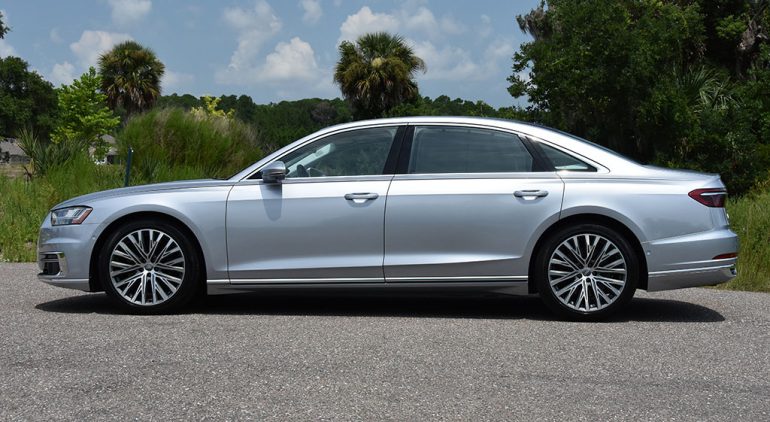 Performance for the new Audi A8L is decent but there is somewhat of a confusion with classifying the A8 as a hybrid as it’s “mild” hybrid system is a 48-volt setup that is mostly utilized for quick restarts of the engine using the start/stop feature and powering accessories for a short period of time when the vehicle is coasting. As far as being an aid to add additional power, the mild-hybrid system doesn’t add much to the equation but is instead utilized more for powering ancillary items where the engine isn’t bogged down by the alternator taking up such a task. In all, there are times where the A8L can coast to a stop and shut down the engine for a short period of time. I’m not so certain such a task will save much on fuel as the so-called mild-hybrid system doesn’t seem to power accessories much longer than any other conventional gas-powered vehicle still allowing the air conditioner to get stale. Audi could have done much better here to at least run the air conditioner compressor off of the 48-volt system for longer engine-stop times at a traffic light or in a parking lot at idle. Fuel consumption is an EPA-estimated 19 mpg city, 27 mpg highway, and 22 mpg combined. 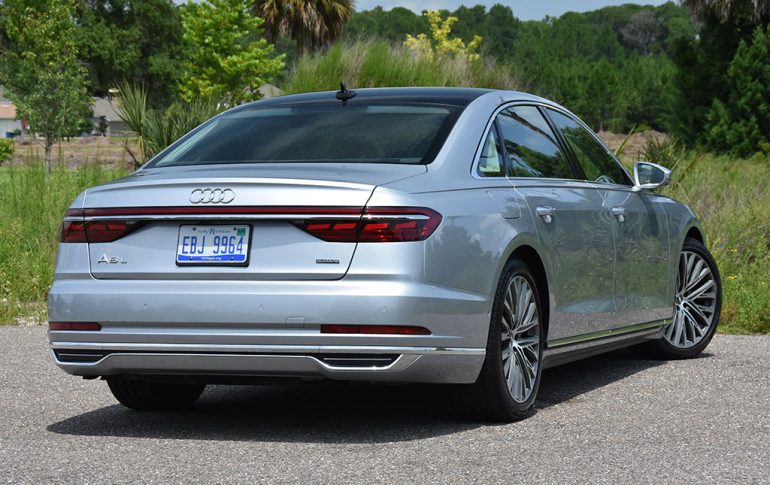 Overall acceleration of the new Audi A8L is good for a big vehicle but don’t expect to win any races from a stoplight against its competition as a 60 mph from a stop takes about 5.6 seconds. Other aspects of the performance in the new A8L are somewhat disappointing as the vehicle tends to loft around much more than I would like exhibiting a big of a floating sensation, even in its Dynamic mode which claims to firm up the dampers and lower the vehicle slightly via the air suspension system. In most cases, the A8L is too soft and that softness doesn’t translate well to keep the A8L balanced at times. The quattro all-wheel-drive system does its job behind the scenes with no drama to be found potentially keeping the lofting body in check when you pull out in traffic from a turn or are caught in inclimate weather. While the ride quality is excellent, the extra softness takes away from having much confidence in driving spiritedly. 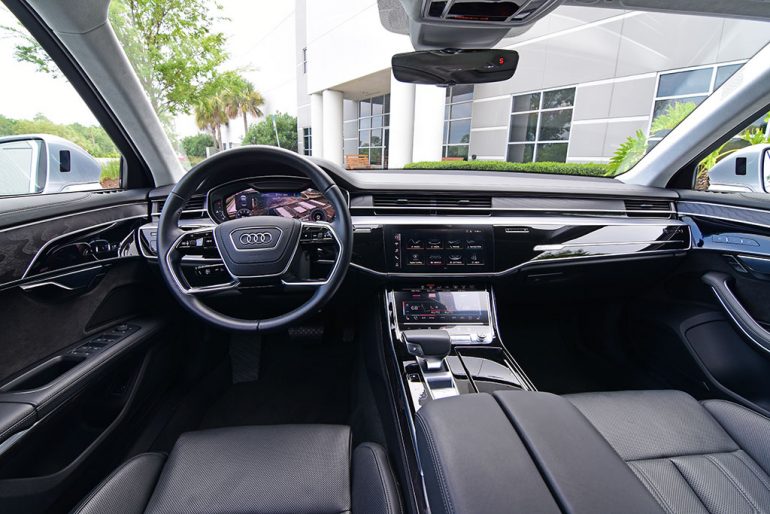 The technology used in the Audi A8L appears to try a bit too hard to pull off something amazing but falls short in its overall user-friendless. The two large touch screens adorned with a glossy fingerprint-collecting coating are bright with a clear high resolution. The use of the tactile feedback of pressing the screens is intuitive along with each vent’s air flow control but that’s where the good parts stop. The system tries a bit too hard to offer several functions but navigating the menu sets are initially confusing where there is somewhat of an overlap of menu sets departing from a consistent use learning curve. Don’t get me wrong, the new A8L serves up a plethora of tech features, such as wireless Apple CarPlay, full-color heads up display, an awesome virtual cockpit gauge cluster on a 12.3-inch screen, and even a full array of on-screen climate controls and seat massage functions. The rear seating, thanks to the optional Executive seating package, has a removable tablet-like device for controlling the seats, climate, and entertainment features for rear seat occupants. In all, if you owned a new Audi A8L with all the goodies you will get used to the system’s idiosyncrasies and overall experience may become enjoyable. Still, reaching that point will take a while, at least a few weeks in my opinion. 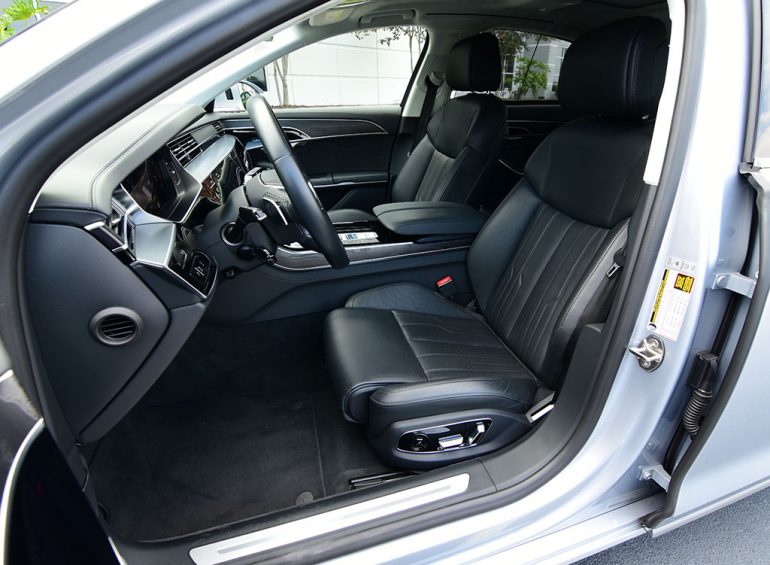 The interior has exceptional fit and finish with plenty of luxury appointments throughout, including an abundance of customizable ambient lighting. The cabin is quite the inviting space and the seating areas are very comfortable without requiring many adjustments to find a good seating position. The long wheelbase of the A8L only improves upon the interior accommodations with extra legroom out back. 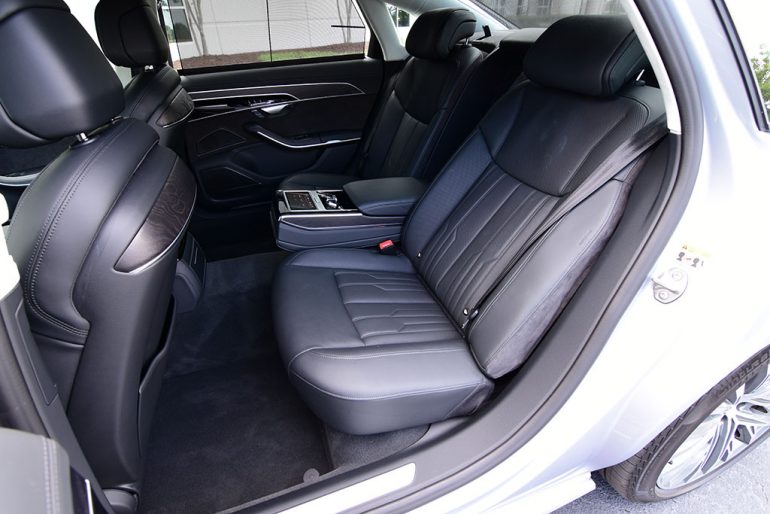 The exterior of the new Audi A8 has remained to keep its classic style but takes use of some high-tech features, as expected, to raise the bar using OLED rear lighting that performs and dancing routine when you unlock the vehicle. The front HD Matrix LED headlights are exceptionally bright and light the areas needed as you drive through bends. The turn signals take use of the fancy LED lighting tech for a directional signaling out back and up front. The 20-inch wheels combined with the chiseled aluminum panel lines throughout the A8L draws your eyes for a stately presence that the A8L makes sitting still or cruising down the road. 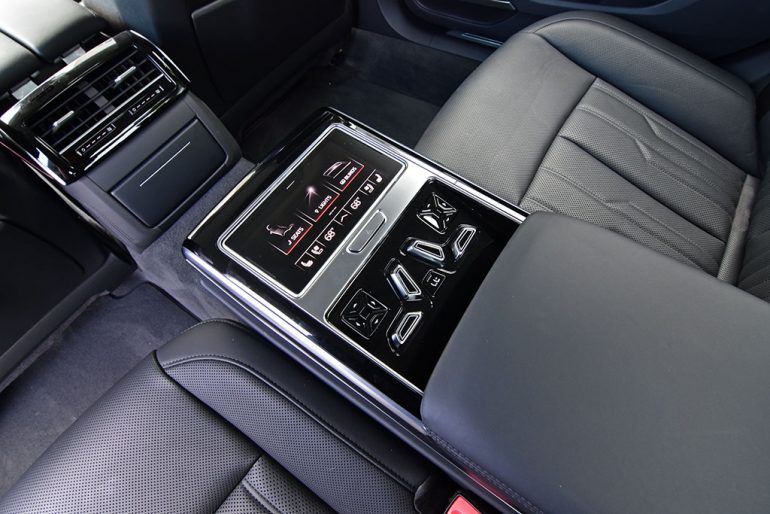 Much about the new Audi A8L is an extension of the classic mold that the A8 has always defined. With high expectations abound in such a vehicle, the A8L doesn’t fully execute for those who are critical. However, through the use of a lot of tech and classic design, the A8L draws the proper attention but not on the scale of its competition. In a nutshell, the A8 is something different and often different is just enough to turn heads and garner a new buyer that doesn’t know any different. To conclude, the new Audi A8 has a respectable price point that may undercut some of its competition landing at $101,095 for my nicely-equipped new A8L test vehicle. 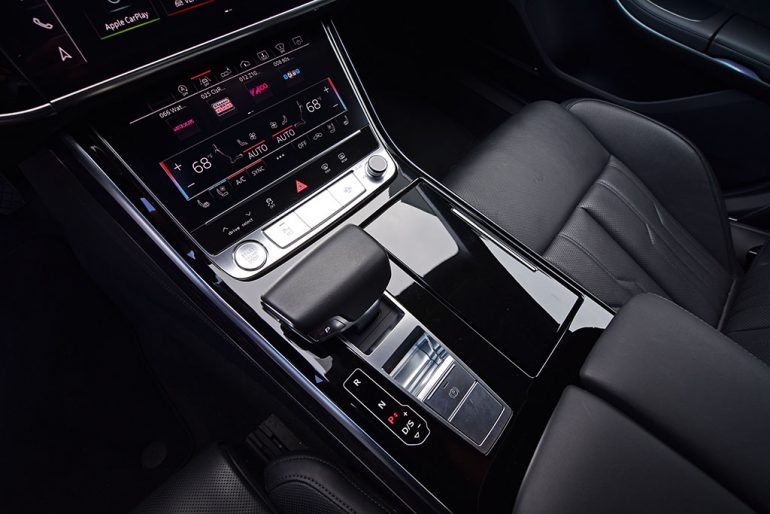 > Get the best price on the Audi A8L from a network of local dealers now. <<