Chevy Announces Yet Another Bumblebee Camaro 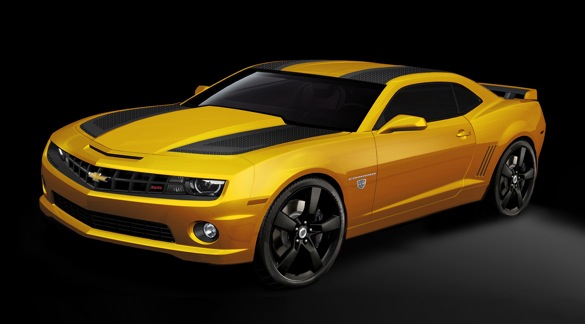 Did you miss your chance to buy a Bumblebee Camaro in 2010 or 2011? Are you obsessed with Transformers, Decepticons and Autobots? Are you counting the hours until you can go see Transformers: Dark of the Moon? If so, Chevy has some good news for you: they’re building a Transformers Camaro (in Bumblebee yellow and black, of course) for the 2012 model year, too.

The Transformers package will add $3,000 to the cost of a 2LT (V-6) or 2SS (V-8) Camaro. For your money, you get Rally Yellow paint with black stripes, 20-inch black wheels, summer-only performance tires, Autobot logos on the wheels and front fenders, black leather seating with yellow stitching, yellow stitched trim on the dash and center console and Autobot logos on the front headrests and center console. Just in case you wanted more, Chevy dealers can upgrade you to 21-inch wheels and a black paineted ground-effects package.

Chevy dealers will begin taking orders in July, with deliveries beginning in September. Unlike the movie car, your Bumblebee Camaro won’t configure itself into a giant, evil-fighting robot, but that’s probably a good thing. Can you imagine how much insurance would cost on a real Autobot?