Does Ford Have A Problem With The F-150 SVT Raptor? 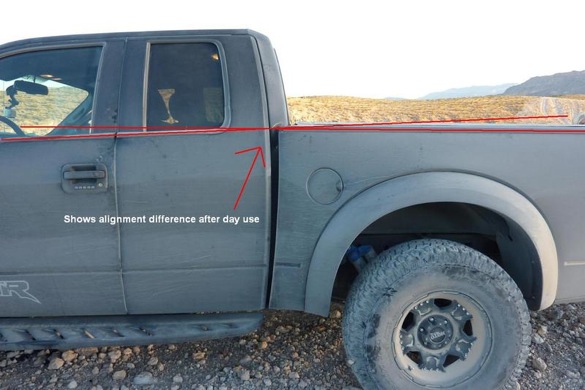 If you watch Ford’s promotional videos on their F-150 SVT Raptor, it looks like you can drive the truck off a cliff without fear of damage. Despite the Raptor being a production vehicle, Ford implies that it’s up to the challenges and hazards of desert pre-running. Based on the experience of a growing population of owners, that may not be the case.

At issue is the Raptor’s rear frame, which isn’t fully boxed. Hit a bump or pothole hard enough, and the rear axle can slam against the bump stops, causing the frame to bend and the bed to tilt downward. The population of owners who’ve experienced this is growing, and Ford has yet to acknowledge the problem. In fact, Ford has used scratched undercarriages and scuffed skidplates as evidence that the trucks with bent frames have been abused, which would potentially void warranty coverage.

This much is clear: the condition is happening on a growing number of trucks that are used as Ford intended. If you own a Raptor, you may want to taper back on how hard you drive your truck off road, at least until Ford (or the aftermarket) comes up with a solution.