Americans Opt for 4-Cylinder Engines over V6s and V8s 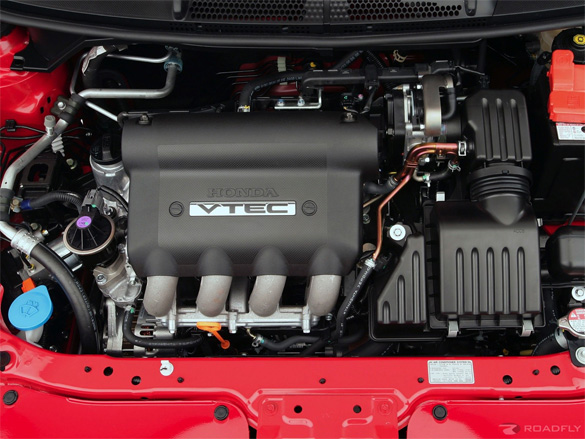 In my book nothing beats a well-tuned V8 engine with a throaty sound and enough horsepower and torque to make the seat seem like a temporary implant on your body. Granted now days V8 equipped cars make up the fastest and best performing vehicles ever on the road, they are also some of the thirstiest vehicles when it comes to fuel consumption.

The shift in engine choice comes from two main factors. Buyers are conscious of the high gas prices and opting to downsize to the vehicle with the smaller engine choice while manufacturers are shrinking engines to meet future federal fuel economy standards.

Forced induction is a major contributor to swaying the American public to choose new advanced 4-cylinder engines. As a prime example, Chevrolet’s new Cruze Eco version has a turbocharged 1.4-liter 4-cylinder getting an EPA estimated 42mpg while a Hyundai Sonata 2.0 Turbo produces 274 horsepower yet still manages to get up to 33mpg. These figures were unheard of just a few years ago especially considering the low base price point of these new vehicles. 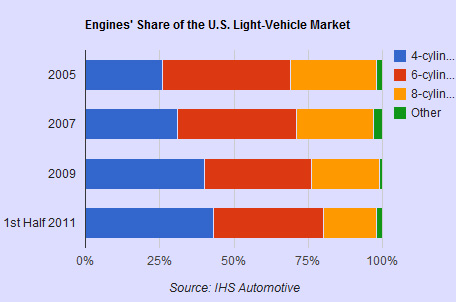 Hybrid cars are a sure bet when it comes to saving the most fuel but conventional gas engines are much cheaper. Michael Omotoso, J.D. Power’s senior manager of global powertrain forecasting said, “If you can get 40 mpg from a sub-$20,000 car, why buy a hybrid for a lot more money?”

When it comes to horsepower there is an old saying, “there is no replacement for displacement.” That saying still rings true but only to a certain point especially if you want to save fuel. Today’s new engines incorporate advanced technologies making them lighter, more powerful and ultimately more efficient. A new turbocharged 4-cylinder can outdo many older V6s in just about every aspect. The same goes for newer V6 engines compared to older V8s. Continental North America powertrain division forecasts that 3.4 million engines installed in North American-built vehicles will have a displacement of less than 2 liters, up from 1.2 million in 2010. That means eventually one in five vehicles manufactured would have a 2.0-liter or smaller engine by 2017.

What is your take on smaller displacement engines being the new choice for Americans? Are you happy with a 4-cylinder or will we have to pry that big V8 from your lifeless fingers?