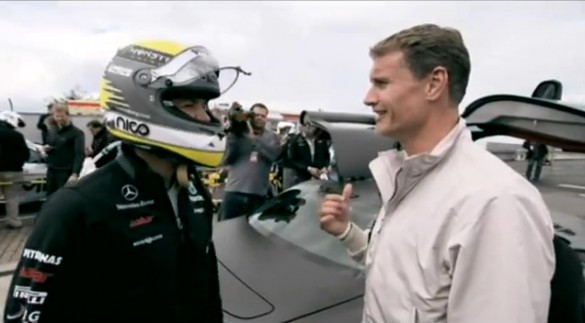 I know this as fact: ex-racing drivers make the world’s worst passengers at the hands of current racing drivers. David Coulthard is no stranger to going fast: the Scottish driver raced in Formula One from 1994 through 2008, racking up some 13 career victories and 12 pole positions. He’s still racing, driving in the DTM series for Mücke Motorsports.

Nico Rosberg is a current F1 driver and teammate to Michael Schumacher at Mercedes-Benz. Rosberg is young, but that doesn’t mean he’s inexperienced; in fact, he’s got five and a half seasons of F1 experience under his belt, but that’s not reassuring to David Coulthard when he climbs in a Mercedes-Benz SLS AMG for a hot lap of the Nürburgring Nordschleife. I’m sure Coulthard wasn’t reassured to learn that Rosberg was a ‘Ring virgin, and the wet pavement probably didn’t help the Scot’s nerves any. Sideways at triple-digit speeds is puckering, no matter who’s behind the wheel. Enjoy the epic video below.