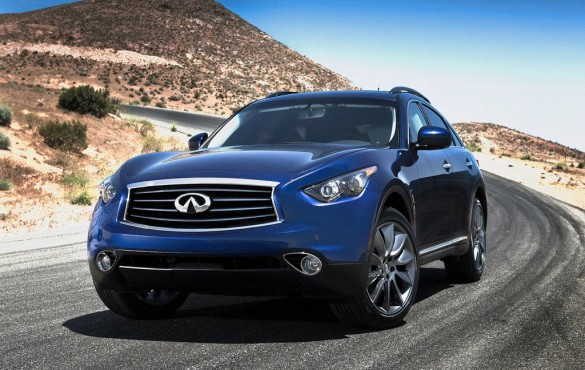 The Infiniti FX continues to embark on its aggressive styling into the model year 2012 with a slight front fascia refreshing and minor option package updates.

The new 2012 Infiniti FX line gets a mid-cycle update which includes a slightly redesigned front grill and fascia that resembles the Infiniti Etherea Concept. The upcoming Infiniti JX, from the looks of the teaser images, has design aspects molded into the new 2012 FX.

Other updated components of the 2012 Infiniti FX include revised option packages, new 20-inch split-five-spoke wheels, dark-finished 21-inch 10-spoke wheels and a new Graphite Shadow exterior color to replace Platinum Graphite. The 20-inch wheels will be available on the FX35 Deluxe Touring Package while the new 21-inchers will be part of a new FX35 AWD Limited Edition package which includes an exclusive Iridium Blue exterior color show in the images below.

Option package updates for the 2012 FX include Adaptive Front Lighting on the FX50 Sport Package and leather climate-controlled seats offered on the FX35 Deluxe Touring Package (no longer part of the FX35 premium package). The 3.5-liter 303-horsepower V6 on the FX35 is a carryover as well as the 390-hoserpower 5.0-liter on the FX50. Expect the new 2012 Infiniti FX to be on display long side of the new Infiniti JX at the upcoming Pebble Beach Concours D’Elegance later this month and go on sale October of this year.