A 350Z, A Few Cameras And The Empty Streets Of Prague 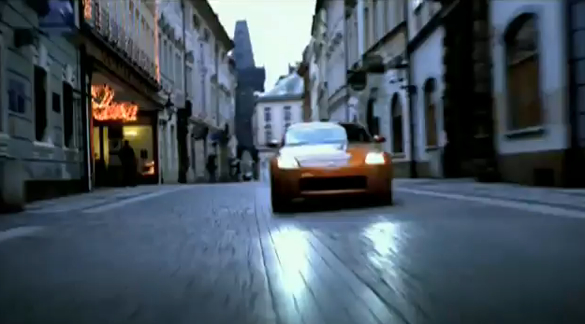 If you’re looking for plot, acting or sweeping panoramas of mountain peaks, you won’t find it in the classic video below. Called “The Run,” the video depicts a (relatively) high-speed run in a 350Z through the early-morning streets of Prague, Czech Republic. While some of the driving may look dangerous, the video was filmed under controlled conditions (closed or limited access street) and was used as a marketing piece by Nissan to highlight the launch of the 350Z. In other words, no street-crossing nuns were actually frightened in the making of this video.

The 350Z used in filming wasn’t exactly stock, either. The car had its airbag systems deactivated for high speed driving over bumpy and steeply crowned cobblestone streets. The driver had the benefit of a five-point racing harness to keep him in place, and airbags were used to supplement the rear suspension, which had to cope with the weight of several cameras. This was filmed in the days before you could stick a GoPro hi-res camera to your roof and call it done.

Enjoy six and a half minutes of driving bliss, and I recommend that you crank up the sound.