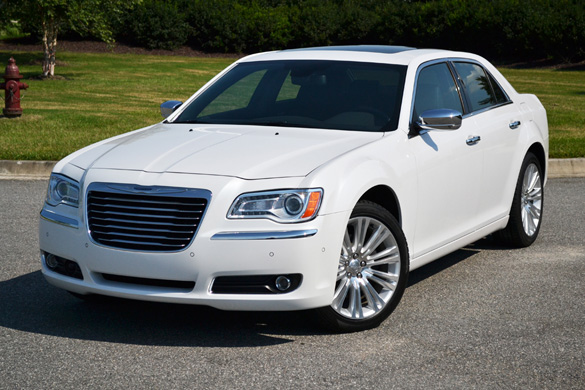 The newly redesigned 2011 Chrysler 300C embarks on a journey into comfort and refinement elevating Chrysler’s luxury flagship to new heights.

The Chrysler 300 has been recognized for over 6 years as a champion in Chrysler’s luxury segment. New for 2011, the Chrysler 300 enters into its second generation with a redesigned exterior and interior. The redesign features many improvements and enhancements putting the new 300 at the forefront of the full-size luxury car segment once again.

The world was put on its heals when Chrysler rolled out their new marketing campaign during the last Super bowl which was positively received by many. The campaign continued to introduce several new vehicles from the Chrysler Corp. including their all-new flagship, the 2011 Chrysler 300. 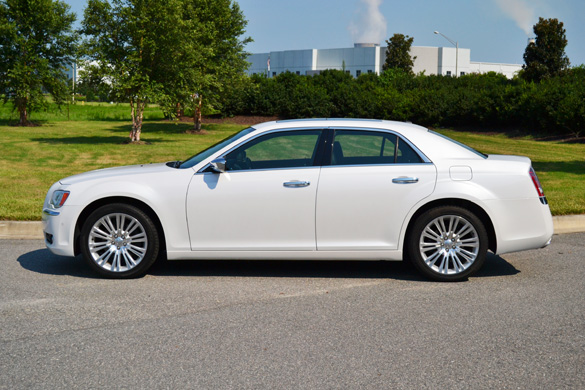 For 2011, the Chrysler 300C remains to be the top model for the 300 lineup, that is if you are not considering the performance oriented 465 horsepower 300 SRT8 due out this fall. The base 2011 Chrysler 300 gets the new standard 3.6-liter Pentastar V6 engine with 292 horsepower and 260 ft-lbs. of torque mated to a 5-speed automatic transmission. At the middle of the line, a new 300 Limited edition gets the same powermill but a few extra amenities such as remote-start, keyless Enter-N-Go system, fog lights, rear backup camera, Uconnect Voice Command w/Bluetooth, 18-inch wheels over the standard 17-inchers, and heated front seats. V6 models get an EPA estimated 18mpg city and 27mpg highway. Our loaded-up 300C, for starters, adds a 5.7-liter HEMI V8 engine with 363 horsepower and 394 ft.-lbs. of torque also mated to a 5-speed automatic. The HEMI V8 gets an EPA estimated 16mpg city and 25mpg highway. Other equipment on our 300C tester included heated and cooled cup holders, heated and ventilated front seats, heated rear seats, heated steering wheel, rear sunshade, navigation system, rain-sensing wipers, smart-beam adaptive HID headlights (which adjust high beam brightness according to environment and swivels headlights according to steering wheel position), and optional 20-inch polished aluminum wheels. 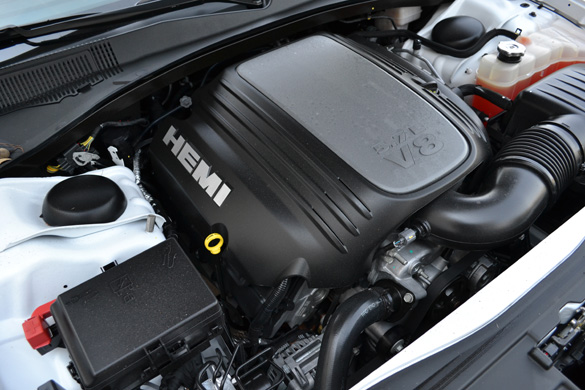 Stepping inside of the new Chrysler 300C will put you in a state of serenity. The newly designed interior of the 300C is lavish enough to satisfy the buyers of luxury vehicles costing twice the price. New sound deadening materials were used to keep the cabin well insulated from road noise. The 8-way adjustable driver and passenger seats are supportive and comfortable for small and large adults. The newly designed dashboard uses quality materials, many of them being soft-touch plastics, while the new 8.4-inch LCD touch-screen is by far the best rendition of Chrysler’s Uconnect system. The new Uconnect system and touch-screen interface combines several vehicle functions as well as the a/c and heater controls, audio controls, Sirus travel link, vehicle settings, and Garmin –based GPS navigation. 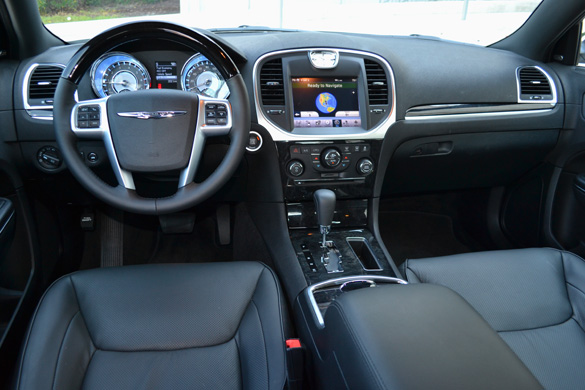 When it comes to infotainment for Chrysler corp. vehicles, Uconnect has been touted as Chrysler’s workhorse for many years now. The latest adaptation of Uconnect in the new Chrysler 300 comes as standard equipment. Our 300C test vehicle was equipped with Sirius Travel Link.  A new technology that gives the driver and passengers real-time information such as traffic conditions, weather, local movie show times, and local gas prices. The newly updated iPod interface actually works. In my past experience with Chrysler vehicles, the iPod interface was not-so friendly with iPhones, even when streaming audio via Bluetooth. My Chrysler 300C test vehicle had no issues with streaming or USB integration with my iPhone. Thanks for getting it right Chrysler! 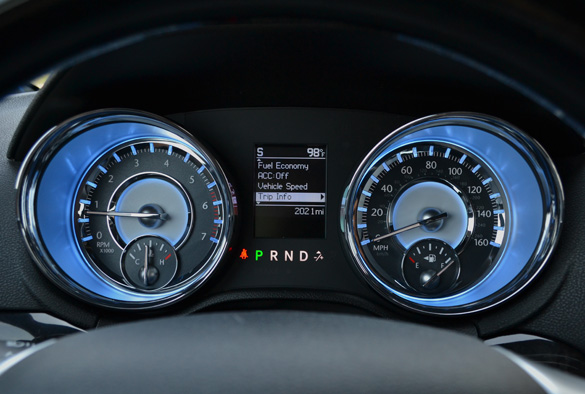 New blue indigo gauge clusters have a congenial retro style to them. The center cluster LCD screen is easy to navigate, scrolling through vehicle information screens and displaying the status of the radar cruise control. The new steering wheel is much improved over the bus-sized wheel from the previous generation 300.

Driving the new Chrysler 300C is truly a pleasure. The 300C is smooth, poised, and competent on the road. During my local twisty road excursions the 300C kept its balance well for a large vehicle. The suspension dampers are well tuned, absorbing bumps like your grandfathers Cadillac, without any of the aftermath drama-filled bouncy rebound. At times the 300C felt much like its German competition, never being overly soft or hard even with the large 20-inch wheels. Steering feel from the electric rack is weighted well and provides just enough feedback to the driver. On the highway, the 300C wants to hog the road, or at least it seems that way when glancing towards your blind spot or rear window. Visibility has been improved over the last 300, but remains to be somewhat limiting towards the rear. This is why I am thankful that Chrysler includes a blind-spot notification/warning system as part of the SafetyTec Group option on the new 300C. The SafetyTec Group also includes forward collision warning, rear cross-path detection, and front/rear parking sensors. 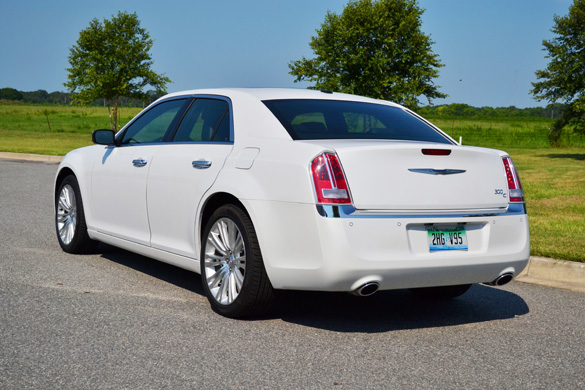 The 2011 Chrysler 300C can be had in a rear-wheel-drive or all-wheel-drive configuration. Traction control on my rear wheel drive 300C test vehicle stepped in subtly when the rear end started to get out of line due to some heavy right-foot action. I am more than certain the AWD 300C may have kept things even more concise especially on wet pavement. The big 5.7-liter HEMI V8 puts down smooth power and enough of it to do proper burnouts as you can see in our video review below.

Exterior styling on the new 2011 Chrysler 300C combines elegance and a quant taste of luxury. The new grill, and the unmistakable day-time running LED lights are a nice signature touch to the front-end of the 300. Although some will argue that the exterior is not much of a drastic change over the first generation 300, I would beg to say that it is a much needed improvement. The previous 300 was not a bad looking car by any means, it was just dated.  Possibly because Chrysler managed to sell over 400,000 of them in the past 5 years. Most of them all looked virtually the same except for the wheel size and color. For a while, mainly due to the recognizable front-end styling, it was considered to be the “poor-man’s Bentley”. Fortunately, the all-new 2011 Chrysler 300C can easily shrug off that urban nomenclature in place of its properly due position in the affordable luxury car segment without compromise. 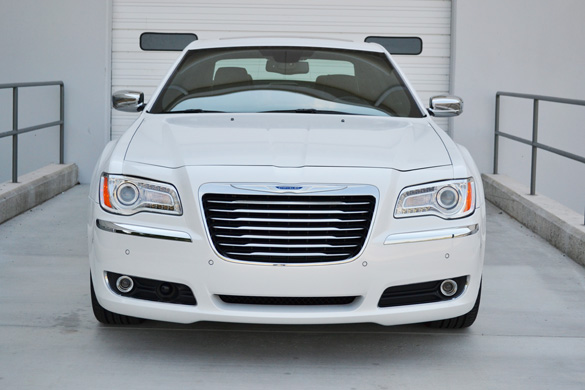