BMW Pioneers The Next Advance In Lighting: Laser Headlights 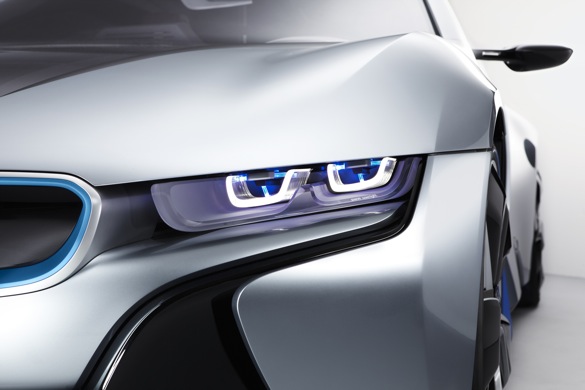 Automotive lighting has evolved rapidly over the past few decades, making quantum leaps in progress from sealed beam to halogen to high-intensity discharge to LED headlights. Each generation brings improvements in vision, reductions in glare and increased driver safety, but that doesn’t mean automakers are content to leave things status quo or rely solely on third party manufacturers for the next big advancement.

BMW has always tried to innovate vehicle lighting, and they’ve developed features such as their “Anti-Dazzle High Beam Assistant,” which automatically dims high beams for oncoming traffic, their “Adaptive Lighting,” which steers the lights through a corner based on steering angle, and their “Dynamic Light Spot,” which helps illuminate pedestrians to avoid vehicle-pedestrian impacts. BMW has also pioneered the use of full LED headlights, which require far less energy (and therefore less fuel) to operate than conventional headlights.

As efficient as LED’s are, they’re not nearly as bright or efficient as laser diodes. Lasers produce monochromatic (same wavelength) light, and are a “coherent” light source, meaning that all laser light waves have a constant phase difference. Because of their efficiency, laser diodes are significantly smaller than LEDs, and use less than half the energy.

Lasers can pose a vision risk if aimed directly at the eye, but BMW has engineered a solution to this potential problem. Lasers won’t shine directly onto the road, but instead will be projected onto a phosphor-rich material that converts the blue lasers to a white light source, harmless to humans and animals.

Don’t expect laser headlights in the showroom just yet. The technology is still undergoing development, but is showing great promise in both illumination and energy savings. Your next car may not have laser headlights, but there’s a good chance that the technology will be mainstream in the next decade.