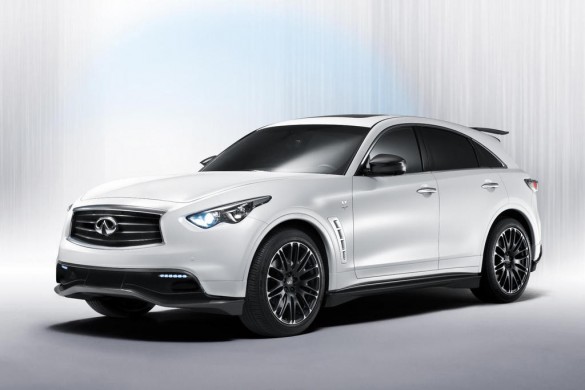 As one of the top drivers in Formula 1 (and the reigning world champion), Red Bull Renault driver Sebastian Vettel could easily afford to buy any car he wanted. Contractual obligations probably encourage him, strongly, to be seen in a vehicle from one of the teams sponsors, so you’d expect him to drive a Renaultsport-tuned Megane, or perhaps an Infiniti M56.

He doesn’t. In fact, Vettel’s personal ride of choice is an Infiniti FX50 crossover, albeit a specially-tuned one. Seb’s ride makes a bit more power than stock, and it rides on a stiffer suspension than the average Infiniti grocery-getter. He’s made a few tweaks to the interior as well, which is easy to do if you have an unlimited budget to work with. Short of breaking into an F1 paddock and hot-wiring Seb’s ride, you can’t really drive his FX50, but you’ll soon be able to buy one that Vettel’s consulted on.

The full reveal of the Infiniti FX50 Sebastian Vettel Edition won’t take place until the upcoming Frankfurt Motor Show, but we know the crossover will get a new carbon-fiber front spoiler, an odd-looking rear wing, unique wheels (probably 20-inch), and an aerodynamically enhanced rear diffuser. It’ll make more power, too, although how much more than the stock FX50’s 390 horsepower and 369 ft-lb of torque remains to be seen. Reportedly, power output should be enough for the FX to reach a top speed of 186 mph.

Expect a firmer ride and an interior unlike anything else in the Infiniti catalog. You’ll get custom “Sebastian Vettel” badging, too, just in case you forget who signed off on the content of the special edition. There’s even rumor of a carbon-fiber trimmed and F1 inspired steering wheel, but we hope it’s not nearly as complex as the wheels from actual F1 cars.

We’re fans of the FX50, but we have a hard time imagining a “sporty” version of the Infiniti crossover. At least the styling isn’t too over-the-top, with the exception of the JC-Whitney-discount-auto-parts-catalog inspired rear wing. Does anyone really think that looks good, or will produce an actual aerodynamic benefit?