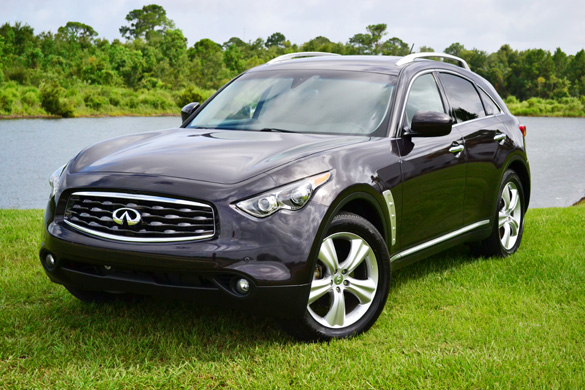 Ever since the conception of Infiniti’s sporty luxury crossover, many consumers have grown to like the unique styling and aggressive demeanor of the FX. First introduced in 2003, Nissan injected many of their Infiniti luxury branded vehicles with the front-midship platform of the Z sports car, transforming the FX crossover into what was touted as one of the most sporty luxury crossover vehicles on the market. Since then, the FX has progressed into its newfound bionic Cheetah skin attempting to appeal to a broader audience.

The all-new 2011 Infiniti FX remains virtually unchanged from the previous 2010 model year. The current body style was introduced as a 2009 model and later updated with added navigation and infotainment system features such as Bluetooth audio streaming, XM weather updates, and a refreshed graphic interface for all 2010 models. My new 2011 Infiniti FX35 test vehicle featured the carryover 3.5-liter VQ-series V6 engine with 303 horsepower and 262 ft. lbs. of torque. 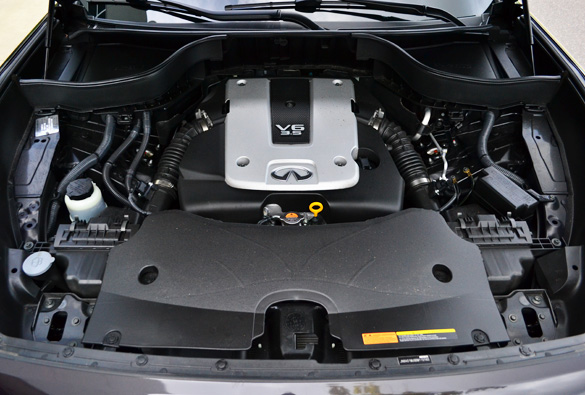 Infiniti has formulated the perfect blend of sports and luxury in their vehicles, and the new 2011 FX is evident of that very formula. The firm ride, much improved over the outgoing 2008 model year, is refined without sacrificing any of the sporty handling characteristics you might expect from even a sports-coupe. The FX35 rides well and feels light giving the driver the extra security one might be lacking in other crossover vehicles in the luxury segment. The ride and handling characteristics vary greatly when comparing the FX35 to a loaded-up FX50S equipped with Continuous Dampening Control (CDC).  Infiniti engineers took into consideration consumer feedback from the first generation FX and made major improvements in the new FX’s suspension system. They used lighter weight aluminum components and retuned the shocks and springs. Over-all, the new 2011 FX35 rides a lot better than the previous generation regardless of the wheel and tire sizes. 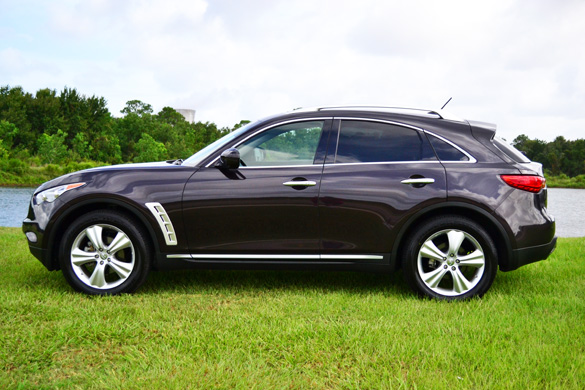 My 2011 Infiniti FX35 rear-wheel-drive model featured 20-inch wheels wrapped in large 265/50/R20 V-rated Bridgestone all-season rubber. The stylish 20-inch, 5-spoke aluminum wheels add physique to the looks of the FX35. An optional torque vectoring all-wheel-drive system can be added for those who want a little extra traction in inclement conditions. Mind you, there is still a snow mode on the standard 7-speed automatic transmission in both rear-wheel-drive and all-wheel-drive configurations, which will regulate power output and wheel slip, for maximum traction in slippery snow conditions.

Unique styling is somewhat of an understatement when describing the look of the 2011 Infiniti FX. Nissan is known for their unique exteriors as of late, and it has trickled down to their prestigious Infiniti luxury brand. There is no mistaking the FX for what it is which can be considered a good thing to those who want to drive something a little different. There are a number of luxury crossovers that have a tendency to come off as boring or vanilla, and the FX is neither. Even the functional side vents, which help to reduce drag, add to the FX’s sporty and distinctive appeal. 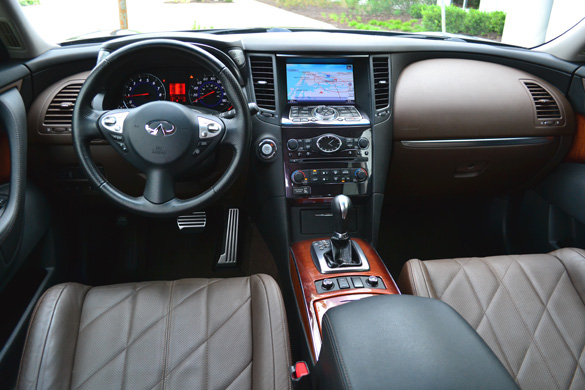 The 2011 Infiniti FX’s interior has received the royal treatment. Not only does it combine many of the Infiniti car line’s stylish dashboard layout, but it adds its own unique wrap-around design. My Infiniti FX was equipped with Java-colored leather seating where the same color flowed through the dashboard at either ends. The black-Java color contrast is somewhat perceived as classy and eloquent. This is something Infiniti was not always known for but now can claim its rightful place offering a quality luxury interior. The climate controlled (heated and cooled) front seats are comfy providing just enough lateral support.

Rear seating leg room can be a mixed bag mostly dependent on how far back the front passengers adjust their seats. However, there is enough room to comfortably seat 3 adults in the back seats, provided that they are “average” sized. Front legroom is plentiful allowing front occupants to stretch their legs on long drives. 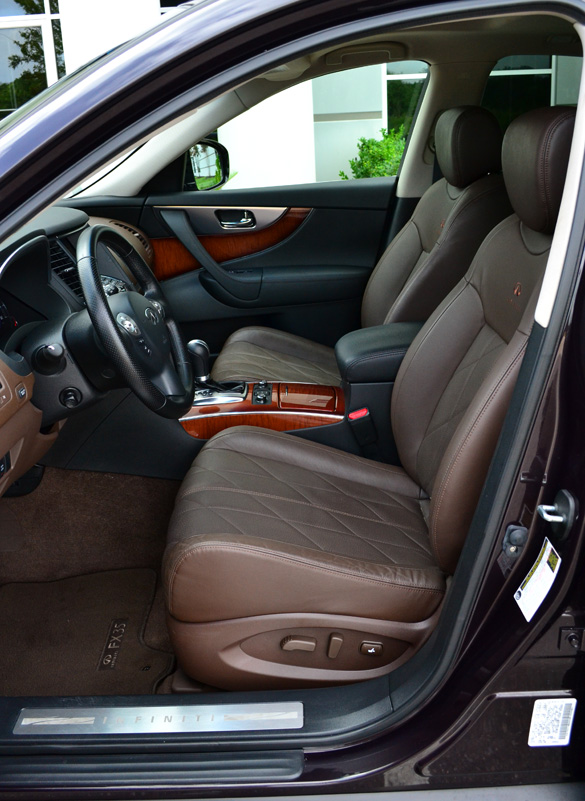 Infiniti has packed the new FX with plenty of technology that not only adds to the passenger’s and driver’s comfort and drivability, but also aids in the safety department as well. New innovative driving assist features such as distance control assist (DCA), intelligent braking assist (IBA), lane departure warning (LDW), intelligent cruise control, and adaptive front lighting system (AFS) all help the driver stay alert and step-in as necessary to help avoid an accident. All of these features were part of my test vehicle’s optional $2,900 technology package. Together, distance control assist, intelligent cruise control, intelligent braking assist, and a forward collision warning system rely on a radar mounted below the front bumper to detect objects of other vehicles ahead of the FX. When the FX approaches a vehicle or object too fast the forward collision warning flashes and sounds an audible beep. If the vehicle senses that a crash is imminent and unavoidable, intelligent brake assist will apply extra brake force/pressure to lessen the severity of the accident. Intelligent brake assist is also beneficial during emergency braking when you are about to plow into a car in front of you, by automatically adding extra braking pressure as you depress the brake pedal. Lane departure warning can be set to automatically brake the opposite side wheels and sound an audible beep when a small camera mounted above the windshield detects you moving out of your lane across the painted lines in the road. Intelligent cruise control keeps a set distance from the vehicle in front of you and can actually bring the vehicle to a complete stop if needed. 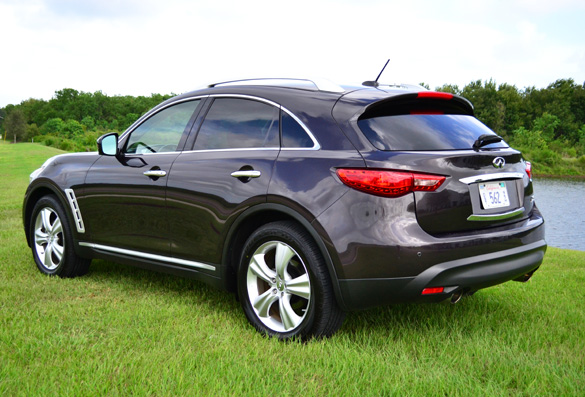 Driving the new 2011 Infiniti FX35 is fun and daring at times due to its agile nature. The FX makes you want to jump out in traffic and act like a hoon until you realize that your family is still strapped in the back seat, and starts to developing a funny looking expression on their faces clearly not agreeing with what you are about to do. The smooth V6 engine in the FX35 is eager to scream, and the smooth and competent 7-speed automatic lets it spin, all the way to redline. The 7-speed transmission does suffer from some dead spots around 30 to 40 mph where flooring the pedal does not upshift like it does at other speeds. Most times, when I demanded power, the 7-speed transmission found the optimal gear quickly, Around 30 to 40 mph it acted like it was confused and refused to upshift until the vehicle slowly reached 40+ mph. At any other speed my Infiniti FX35 test vehicle was eager to run hard. 0-60 mph times come in around 6.5 seconds which is decent for a mid-sized luxury crossover just over 4,000 pounds. The 5.0-liter V8 equipped FX50 does a sprint to 60 mph in just 5.4 seconds but at a cost of massive amounts of premium fuel. The FX35 gets a decent 16 mph city and 23 mpg highway. During mostly city driving I was able to get a solid 21.5 mpg and on the highway my best figure was 24 mpg. If you opt for the V8 FX50 expect those numbers to go down to about 14 mpg in the city and 20 mpg on the highway. 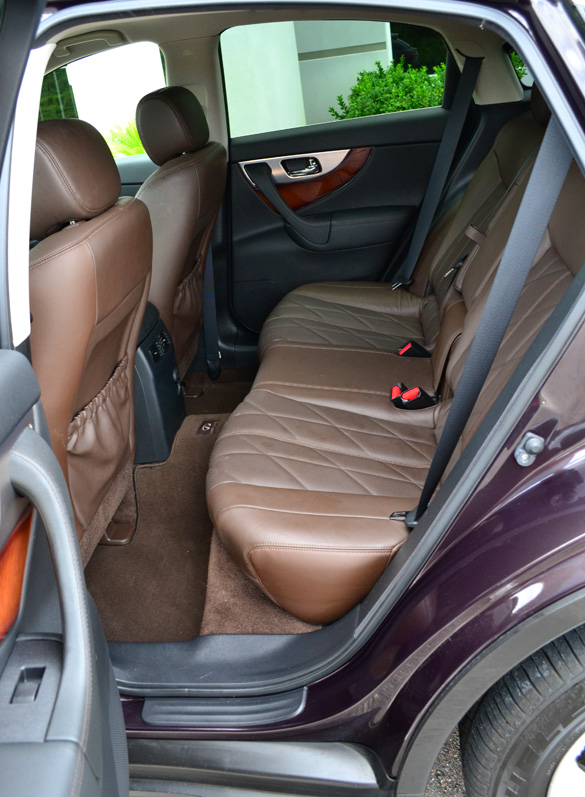 The all-new 2011 Infiniti FX35 is an appealing and sporty luxury crossover. The FX35 is a great alterative to the Lexus RX, BMW X6, and even the Porsche Cayenne V6 that won’t break the bank even when you include several creature comfort options. My 2011 Infiniti FX RWD model was fully loaded with the exception of all-wheel-drive tipping the scale at $52,875 including destination charges. The FX35 starts at only $42,600, which makes it a bargain when compared to many of its luxury crossover competitors even when comparably configured.