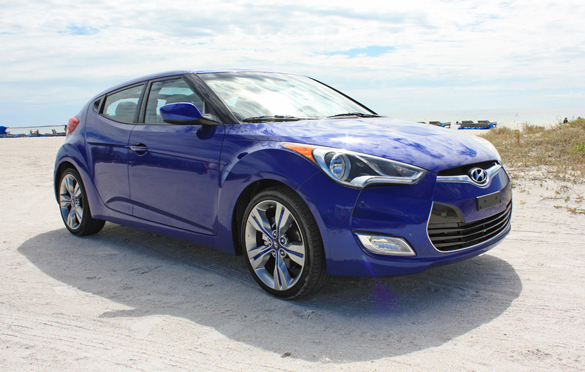 The 2012 Hyundai Veloster is a rolling contradiction in terms. It’s a halo car for Hyundai, meant to lure new customers into the brand, yet it’s priced comparably to a well-equipped Hyundai Elantra. It’s compact in size, yet it has an honest-to-God rear seat, with enough head and leg room to accommodate six-footers. It’s only got 138 horsepower, yet the dual-clutch, paddle-shifted automatic is surprisingly entertaining to drive. Finally, it’s a coupe, but it has three doors (four, if you count the hatch). 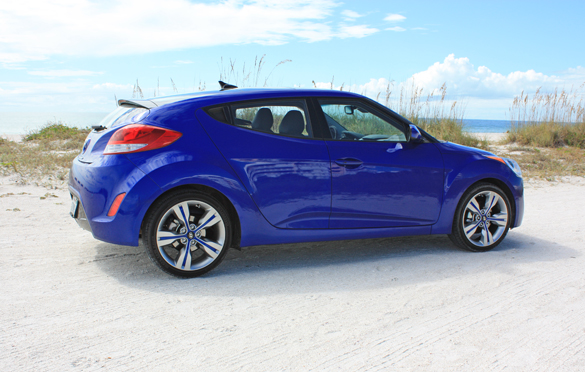 Perhaps the Veloster’s most unique feature is the second door on the passenger side, for access to the rear seats. It sounds like a gimmick, but it’s both surprisingly functional and surprisingly well hidden, since the Veloster’s designers went to great lengths to blend the second door into the bodywork. Even the door handle is cleverly disguised in front of the C-pillar, and more than one passenger will search in vain for a door handle inside the front door frame. 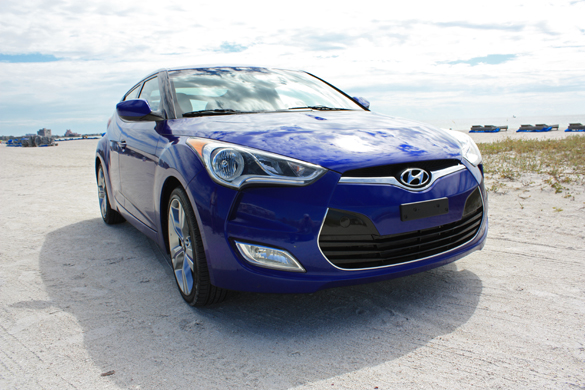 If you like Hyundai’s “fluidic sculpture” design (and we do), chances are good you’ll love the look of the Veloster. To my eyes, it’s like a better-looking version of the Volkswagen Scirocco, which is pure unobtanium on this side of the pond. Stare at the Veloster long enough, and you can’t help but think of another revolutionary coupe, the Honda CRX. Hyundai insists that any resemblance is purely coincidental, and we believe them. Targeting a 25 year old car as a benchmark, regardless of how successful the model was, isn’t anyone’s idea of how to sell cars today. 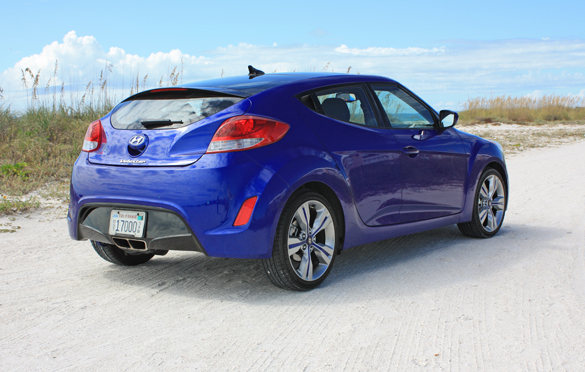 That’s where the similarities end. The CRX was a two seater, while the Veloster will comfortably carry four adults. Unlike the CRX, the Veloster comes chock full o’ cutting edge technology, including Hyundai’s BlueLink telematics system, a 7-inch multifunction display, Gracenotes music recognition with Bluetooth voice command, a USB input, an iPhone / iPod input and Pandora compatibility for music streaming. Opt for the Technology Package (which requires you to buy the Style Package) and you’ll get navigation with real-time traffic updates, rear backup warning sensors, a rear view camera and a 115 volt power outlet in the front.

The most expensive Veloster currently on the market tops out at just over $22,000 when you tack on the Style and Tech pacakeages, which is very impressive for the content delivered. What you don’t get are luxury options such as leather seats or heated seats or automatic climate control; what you do get is technology and style unlike anything else on the market today. 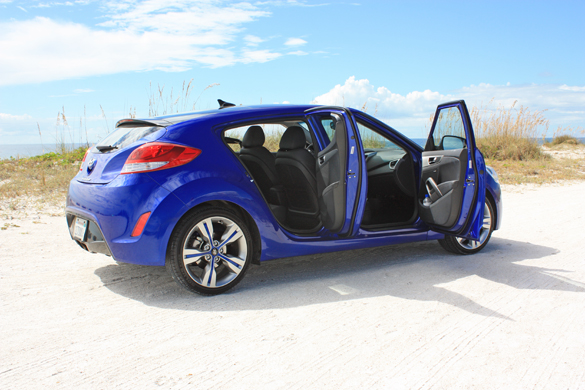 Perhaps the best comparison is between the Veloster and the Honda CR-Z hybrid. The Veloster delivers 29 mpg city and 40 mpg highway when equipped with the dual-clutch, six speed automatic transmission. The CR-Z, on the other hand, delivers 31 mpg city and 37 mpg highway; while the CR-Z outshines the Veloster in city fuel economy, the Veloster gets the win in highway fuel economy, so we’ll call it a draw. Opt for a CR-Z with nav, and it will cost you about $2,000 more than the Veloster, which gives you more interior room plus a back seat to haul passengers with. The Veloster also comes with 17-inch wheels standard, and 18-inch wheels with either the Style or Tech packages. The CR-Z comes with 16-inch wheels, with 17-inch wheels a dealer-installed option.

On the road, I’d give the nod to the Veloster’s available dual-clutch automatic gearbox. It feels quicker than the six speed manual, although the only measurements performed were using a butt-dyno. The new automatic will actually hold a gear to near-redline, fixing one of my biggest complaints about earlier Hyundai Shiftronic transmissions. Gear changes aren’t sport-transmission quick, but they’re not slow, either, which makes the automatic a reasonable compromise for daily driving and weekend fun. 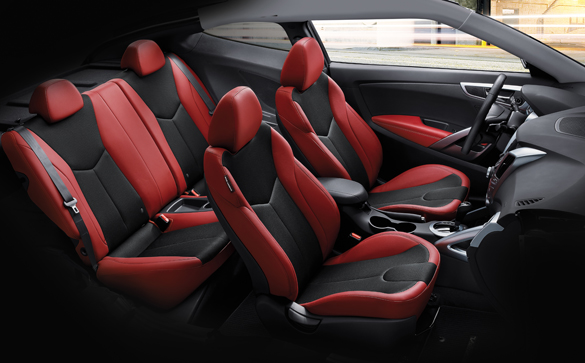 To be honest, I wasn’t a fan of the six-speed manual in the Veloster. Gear ratios seemed taller than with the automatic (although they really aren’t), and acceleration was leisurely with the manual, compared to acceptable with the automatic. It feels like the 1.6-liter Gamma engine uses a heavy flywheel to smooth things out, which makes the gear change from first to second a bit harsh. I didn’t like the plastic feel of the shifter, although gear changes were short enough, with clearly defined gates, to still be satisfying.

That brings up the issue of the engine. For now, the Veloster is available with Hyundai’s 1.6-liter Gamma engine only. It’s good for 138 horsepower and 123 ft-lb of torque, so those looking for a true hot hatchback experience will probably be disappointed. On the plus side, the Veloster delivers near-hybrid fuel economy, making it the ideal commuter car.

As for handling, the Veloster is likely to surprise you. The body itself is stiffer than the Volkswagen Scirocco, which Hyundai used as a benchmark. The nicely-weighted steering provides a surprising amount of feedback, and turn-in is immediate, with very little body roll. The Veloster is a light car, so it likes to be tossed into corners with enthusiasm. Purists will complain that it lacks a four-wheel independent suspension, but the vast majority of drivers won’t ever probe the handling limits of the Veloster’s coupled-torsion rear axle.

So what’s the bottom line? The 2012 Hyundai Veloster is a sporty car that’s packed with all the technology and safety features you could want, wrapped in sexy sheetmetal and delivered at a sensible price. While Hyundai answered questions about a Veloster Turbo with a flat “we don’t comment on future models,” such a variant makes perfect sense and would be more to the liking of driving enthusiasts. If you want a Veloster now, I’d suggest you pay a visit to your Hyundai dealer soon; like the Elantra, I suspect Hyundai will sell all the Velosters they can build.