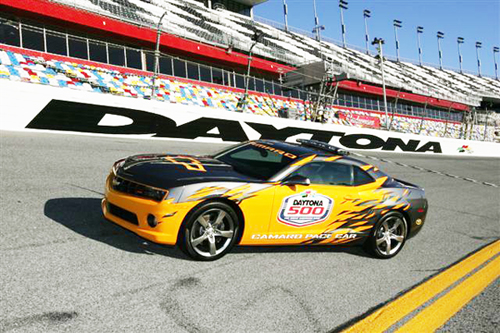 The new 2010 Chevrolet Camaro is sure to be a hit with all of the pre-orders and mass hype that has been circulating for a few years now after the demise of the outgoing model. This year’s Daytona 500 will only add to the hysteria when they rollout the pace car for the 51st Daytona 500 which is of course, a new Cyber Grey 2010 Chevrolet Camaro SS. Several photos including a press release were already posted on the camaro5 forum.

Enjoy the images and press release information below.

DAYTONA BEACH, FL (Feb. 7, 2009) — Daytona International Speedway officials announced the return of the Chevy Camaro as the Official Pace Car of the 51st running of the Daytona 500–the first Camaro to pace the field since 1969.

“Chevy has been a great partner of the Daytona 500 for more than 30 years, and the Camaro is an automotive icon,'” said Speedway President Robin Braig. “This 2010 model will set the tone for a 21st century sports car, and that’s a perfect fit to lead the pack at the ‘Great American Race.”

The 426-horsepower vehicle, powered by the 6.2-liter all-aluminum Chevy V-8, carries a PPG Cyber Grey paint scheme with a bold accent design befitting “The World Center of Racing.” A Camaro has paced the field just twice in Dayton 500 history, in 1968 and ’69, and this 2010 model is scheduled to hit showroom floors this spring.

Built on GM’s new global rear-wheel drive architecture, the Camaro also will be offered in V-6-powered LS and LT models. Additional specs of the 2010 model pace car include: