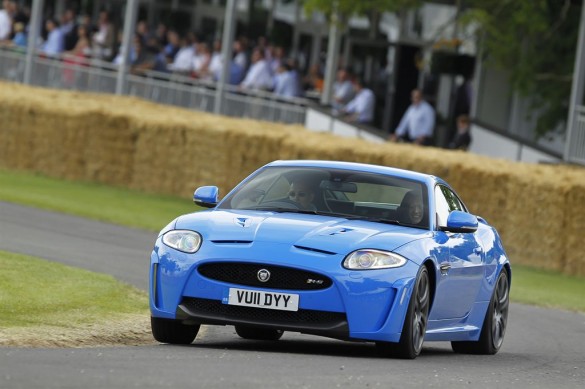 Jaguar may be dropping the 2012 North American International Auto Show in favor of the Mumbai Auto Show, but the Jaguar Land Rover (JLR) brand seems to be making up for it with a renewed focus on the upcoming Los Angeles Auto Show. Premiering at next week’s L.A. Auto Show is the 2012 Jaguar XKR-S Convertible, which will be the fastest drop-top to ever carry the “Growler” emblem.

How fast? The XKR-S Coupe’s 5.0-liter, supercharged V-8 packs nearly 545 horsepower and just over 500 lb.-ft. of torque, which is good enough to hit sixty from a standing start in just 4.2 seconds. Top speed of the Coupe is a seriously quick 186 miles per hour, although it’s likely that the Convertible will be a few ticks slower (since it will carry extra chassis bracing) and may not have the same top-shredding maximum velocity.

That’s not all from Jaguar, either: the seriously sexy C-X16 Production Concept will make its North American debut in Los Angeles. Powered by a 3.0-liter, supercharged V-6 good for 375 horsepower, the C-X16 also gets supplemental power from a 94 horsepower electric motor. A true “performance hybrid,” the C-X16 even boasts a “push to pass” feature, like a Formula 1 car.

Jaguar has indicated that the C-X16 will see “limited production,” but like Porsche’s 918 will be stratospherically expensive. We don’t expect any more news on this in Los Angeles, but we’ll be sure to update you if anything breaks.