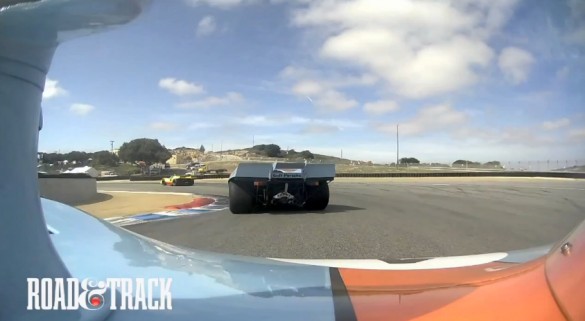 Brian Redman is a British racing driver who defines the phrase, “been there. done that.” Redman has competed at the highest levels of the sport, in series ranging from Formula 1 through CanAm and Le Mans endurance racing. He’s driven Porsches, McLarens, Coopers, Alfa Romeos, Lotuses, BRMs and Shadows, as well as every sports car you could probably name. He’s in the Motorsports Hall of Fame of America, and he’s got an annual vintage car race at Road America named in his honor.

Porsche’s 908 and 908 Spyder were built to compete in FIA Group 6 competition. Originally designed as a coupe for better aerodynamics, the 908 was later changed to a Spyder (open cockpit) configuration for lighter weight. Despite having noticeably less horsepower than the legendary Porsche 917s (908s made roughly 370 horsepower, versus the 917’s 620 hp), the 908’s lighter weight and smaller size gave them an advantage on tighter racetracks.

The Road & Track video below is worth watching for two reasons: first, there’s no soundtrack, so you can actually hear the 908’s 3.0-liter flat-eight wind out, and second, because you get to see the advantage a light car with less power has over a heavy car with more grunt. Turn up the sound, enlarge the video to full screen, then sit back and enjoy.