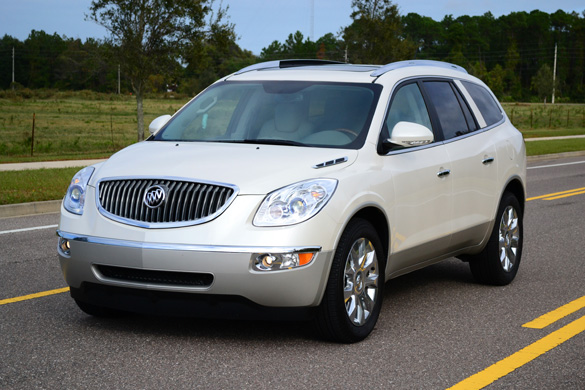 It has been said many times as of late by automotive journalists that Buick is no longer your grandparent’s car. That sentiment holds true across the full line of Buick cars and their one and only luxury crossover, the 2012 Buick Enclave. The new Buick Enclave, first introduced in 2008, continues to lead its segment for having exceptional attention to detail and class-leading interior space all for a competitive price.

For 2012 the all-new Buick Enclave received only minor updates remaining mostly unchanged. The luxury crossover segment has found its way into the hearts of many families under the scrutiny of providing exceptional fuel economy, comfort, and ease of drivability. These qualities shine bright in the new 2012 Buick Enclave. The new Enclave has been refined to give all passengers the serenity of a quiet cabin and several standard luxury amenities. 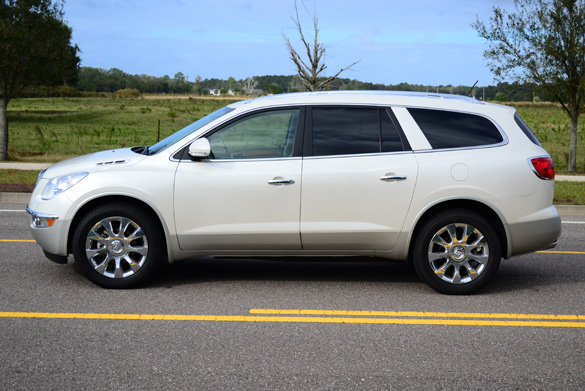 The 3.6-liter V6 engine with variable valve timing is an efficient powermill pumping out 288 horsepower and 270 pound-feet of torque. As standard equipment, power is directed through a smooth-shifting V6 engine to the front wheels. An optional all-wheel-drive package, as found on my test vehicle, can be had with a trailering package giving the Enclave the ability to tow up to 4,500 pounds. Over-all, the new Enclave is just as easy to drive as a mid-sized sedan.

Power delivery becomes very predictable after spending a few minutes behind the wheel of the new 2012 Enclave. Steering weight and response is somewhat numb becoming light to the touch at times but proves to be manageable even when traveling at highway speeds. The suspension is well dampened but is inclined to be a little soft for the common automotive enthusiasts’ taste. Although, Buick has still attempted to keep a far distance from “the grandparents vehicle” nomenclature by keeping general ride disciplined when performance is demanded. The large 20-inch wheels equipped on my test vehicle help compensate for the Enclaves lack of lateral enthusiasm. All other trim levels of the Enclave come standard with 19-inch wheels. Surprisingly the ride quality is not compromised by the larger 20-inch wheels and tires. As a whole, the ride quality is good and not overly “floaty”. 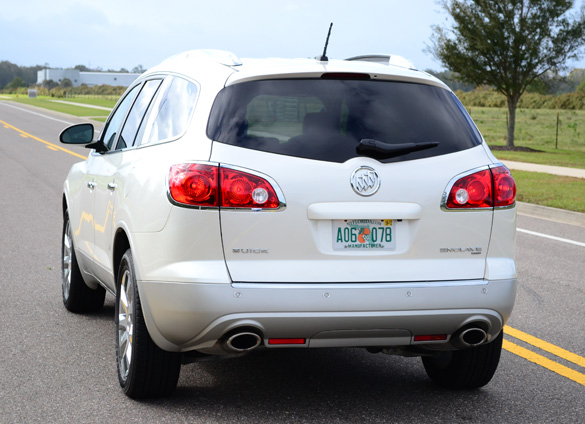 Exterior styling of the Enclave heads in a different direction than its close Chevy Traverse and GMC Acadia siblings of which the Enclave shares the same chassis. If anything, the exterior can be described as contemporary and sophisticated through clever design. In Buicks case, the clever design aesthetic is mostly obtained through years of GM’s experience in building SUV vehicles that all share virtually identical chassis.

The 2012 Enclave is available in three trim groups, Base, Convenience Group, Leather Group and the top-of-the-line Premium Group. My Premium Group test vehicle was loaded up with several options including GPS navigation, 20-inch chrome-clad wheels, power sunroof, and rear-seat DVD entertainment system. One feature that was missing from the equation was keyless entry and push-button start. 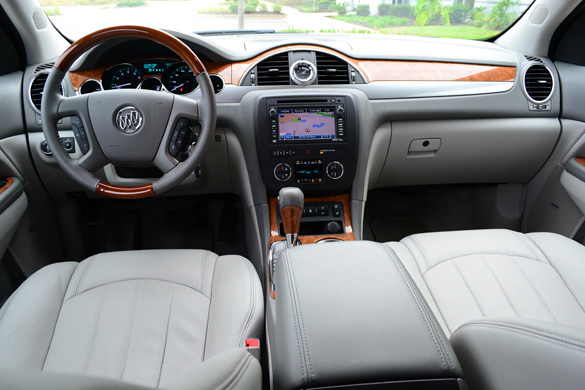 The new 2012 Buick Enclave has a spacious interior. For a crossover vehicle, the new Enclave leads the pack with interior space offering 7-passenger or 8-passenger configurations. My Enclave tester was configured as a 7-seater with the second-row captain’s chairs and third-row bench seat. An optional second-row bench seat is available at no extra charge increasing seating to eight. 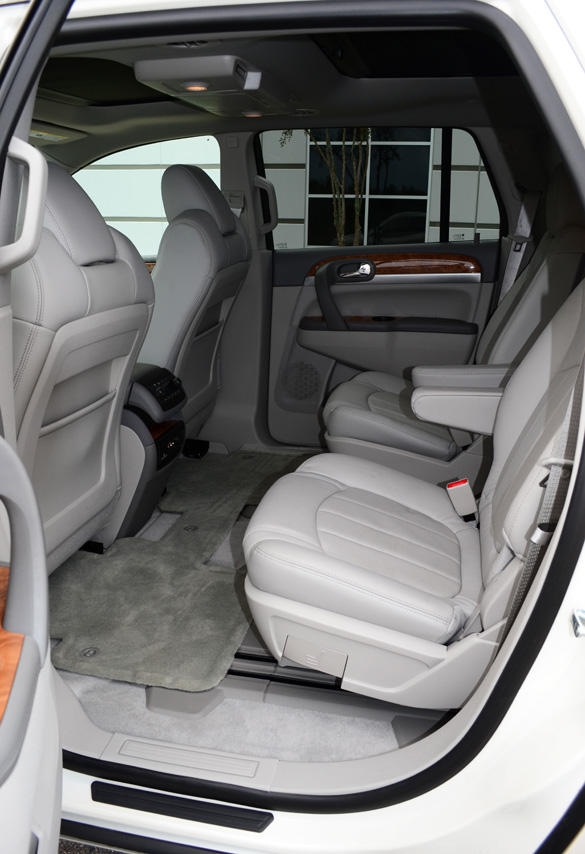 Up front the driver and passenger have plenty of shoulder space and legroom. The second-row captain chairs are fully adjustable forward and to the rear giving virtually any sized adult more than enough room to stretch out on long hauls. The third-row is somewhat easy to access even if you enter through the middle of the second-row’s captain chairs otherwise expect to flip the spring-loaded 2nd row seat forward for entry. Dashboard controls are somewhat simplistic without an overwhelming abundance of buttons. Fit and finish representation looks to be average with several wood accents across the dashboard and door trim. My Enclave test vehicle also receives a power tilt/telescoping leather and wood heated steering wheel with integrated controls. 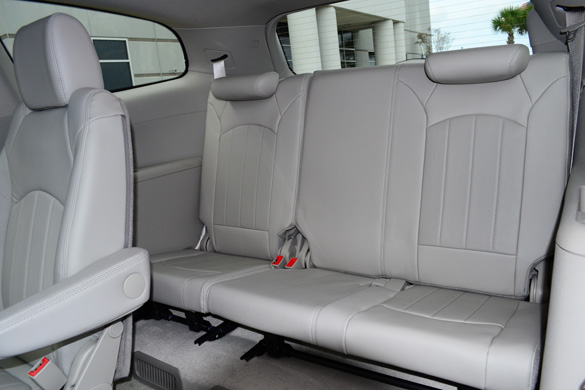 To keep things safe, the new 2012 Enclave comes standard with stability control with rollover mitigation, rollover capable head curtain side airbags, traction control and anti-lock 4-wheel disc brakes. Braking times for the Enclave are somewhat long for the crossover segment coming in a 139 feet from 60mph to 0mph.

In all, the new 2012 Buick Enclave is an excellent alternative to a large 7 to 8 passenger SUV or even a minivan. Not to mention, EPA gas mileage figures for the FWD Enclave are good coming in at 17mpg city and 24mpg highway. My all-wheel-drive model receives 16mph city and 22 mpg highway. My observed highway mileage came to an even 21mpg over-all. 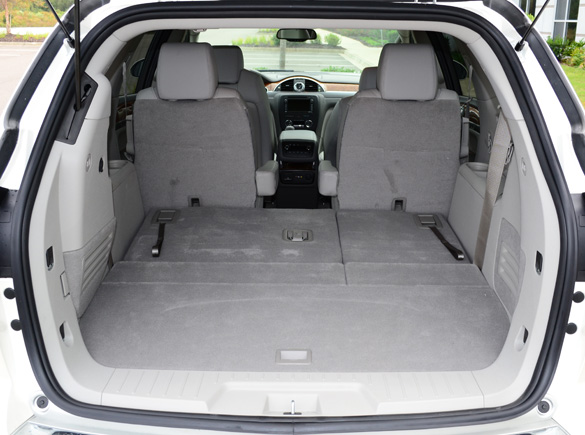 If you are looking for that contemporary alternative to a minivan or large SUV without compromising space and luxury comfort, then the all-new Buick Enclave should be on your list of vehicles to consider.