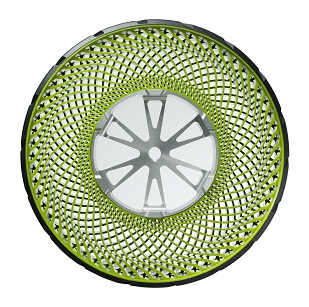 If you’re a car person with access to the internet, you’ve received images via email of a concept airless tire built by Michelin in the early ‘00s. Depending on which version of the e-mail you received (and we’ve seen dozens), the tire was either under development, awaiting production, or headed to a showroom near you in the coming months. While the idea was sound, the technology proved to be both expensive and impractical to develop further.

Michelin may have abandoned the idea, but Bridgestone hasn’t. The Japanese tire giant is showing a prototype of its design for an airless tire at the Tokyo Motor Show, and it’s actively pursuing development with the intent of bringing such a product to market. As you can see in the images, the concept is fairly simple: a series of directional spokes, made of thermoplastic resin, replace the air in a conventional tire. The tire wold be bonded to the wheel using some sort of fastening system, and at end of life all components would be recyclable. 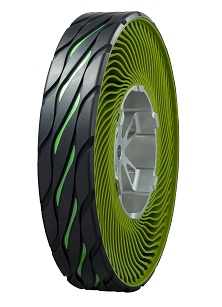 Such a tire would have both advantages and drawbacks to conventional tires. Since punctures wouldn’t really matter (unless tread cords or tire spokes were damaged), the need for a spare tire or inflation kit is eliminated, saving both weight and space. As the tires require no air, the only potential maintenance would be an occasional visual inspection.

On the downside, the handling characteristics of such a tire are completely unknown, and it’s likely that airless tires would weigh more than conventional counterparts. Special wheels would be necessary, limiting the availability of aftermarket wheel options. Finally, it’s unlikely that “airless” tires could be produced as cheaply as conventional tires, adding to the cost of replacement.

We don’t think you’ll be seeing these on production cars any time soon. Still, we’ll admit to being fascinated by the technology, which could be the first significant advancement in the industry since the invention of the pneumatic tire. If we get a chance to drive a car on airless tires, you’ll be the first to know about it.