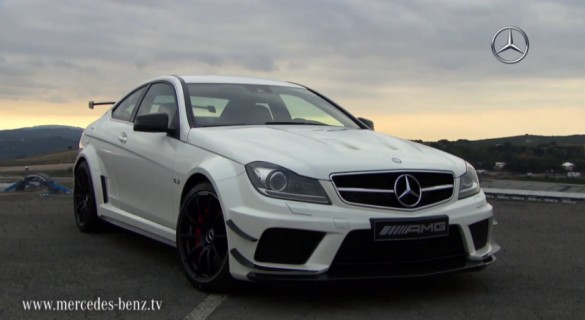 Mercedes-Benz wants you to know that its upcoming C63 AMG Coupe Black Series can be equipped for both track and street duty, depending upon the buyer’s preferences. If your ultimate goal is a car that will see most of its life on the street, with an occasional track day thrown in, the standard C63 AMG Coupe Black Series probably gives you all you really need. It comes with an adjustable suspension and a 6.3-liter V-8 that produces some 510 horsepower, which is good enough to get the bratwurst-burner from zero to sixty in just over four seconds.

If your ultimate goal is time attack, or even if you just want to be “the fast guy” at your local race track, Mercedes-Benz offers up an aerodynamic package for the new Black Series Coupe that includes a larger front splitter, front winglets and an adjustable carbon-fiber rear wing. The package is a bit much for a street car, if you ask us, but there’s no doubt that it will reduce front-end lift and boost rear downforce on the racetrack.

Mercedes will also offer up a Track Package that includes a rear differential cooler and specially developed Dunlop tires, optimized specifically for the Black Series Coupe. There’s a Carbon Fiber Package, too, which adds a more aggressive body kit than the car already comes with.