Volkswagen U.K. Shows Us The Evolution Of The GTI 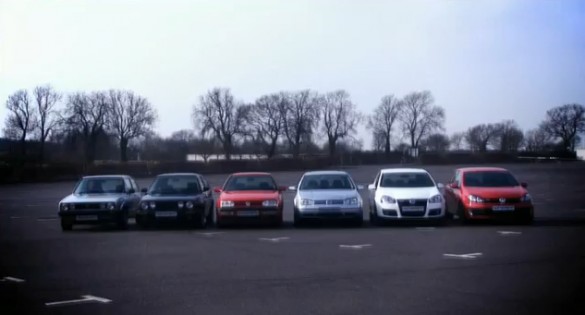 In honor of the Volkswagen GTI’s 35th anniversary, Volkswagen U.K. has produced a short video showing the six generations of GTI on the track. Sadly, there isn’t much on-track footage, and you never get to see the cars running at anything resembling speed, but it is cool to see the entire family gathered for a portrait and video nonetheless.

The original GTI, launched in 1976, weighed in at under 1,800 pounds and packed a 1.6-liter, four-cylinder engine good for around 108 horsepower. While the first GTI wasn’t particularly quick in a straight line, it was a nimble car in corners, prompting the joke that GTI stood for “Get Tickets In.” We wouldn’t get a GTI in the United States until 1983, and emission regulations limited our version to 90 horsepower despite the larger 1.8-liter engine, but the car was still quick enough to be entertaining back in the day.

The sixth generation GTI, launched in 2010, now weighs in at just over 3,000 pounds, but packs a turbocharged, 2.0-liter four good for a (conservatively rated) 200 horsepower. Handling has improved through the years as well, and today’s GTI is a remarkably competent hot hatch that’s more than capable of running with the competition.

Like the Porsche 911 or the Ford Mustang, the GTI has become an automotive icon, offering both substantial performance and value for the money. We can’t know what the GTI will look like 35 years from now, but it’s more than likely VW will still be building its hot hatch.