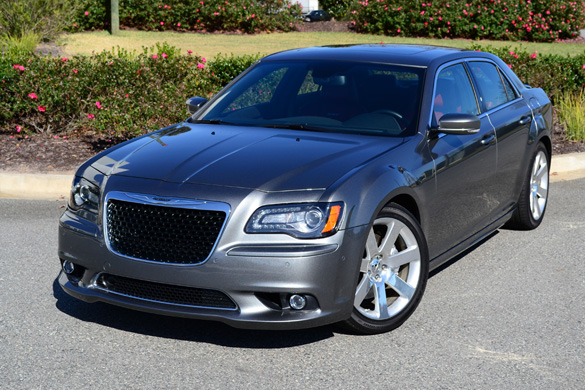 The new 2012 Chrysler 300 SRT8 is the fastest sedan, along side of the 2012 Dodge Charger SRT8, to make it off of the production line from the Chrysler Corporation. At the heart of the new 2012 Chrysler 300 SRT8 is a monstrous 6.4-liter HEMI V8 engine making 470 horsepower and a matching 470 ft.-lbs. of torque. The re-worked engine is a marvel in itself, which at the aid of technological advancements is able to still get 23 miles to the gallon on the highway. 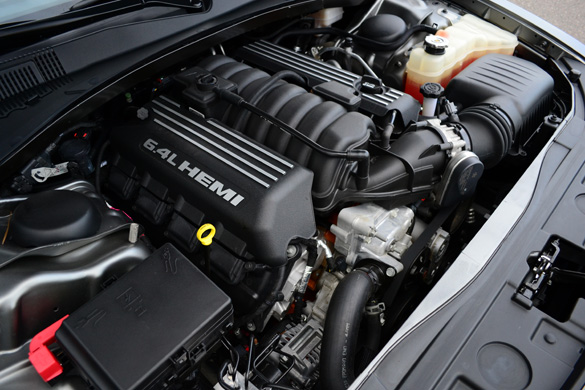 At the point of diminishing return for all-things considered to be technologically advanced by today’s standards, the new 2012 Chrysler 300 SRT still uses a prehistoric 5-speed automatic transmission. The new 300 SRT8 does, however, add shift paddles to a sporty flat-bottom thick-rimed steering wheel, quite possibly to give the driver a perception of added control with a limited amount of forward cogs. Though, having a 5-speed automatic mated to such a robust powerplant, the new Chrysler 300 SRT8 still delivers gobs of rear-wheel-grunt to the pavement even with widely spaced gear ratios. I had no problem painting the pavement with dark lines of Goodyear Eagle F1 rubber. 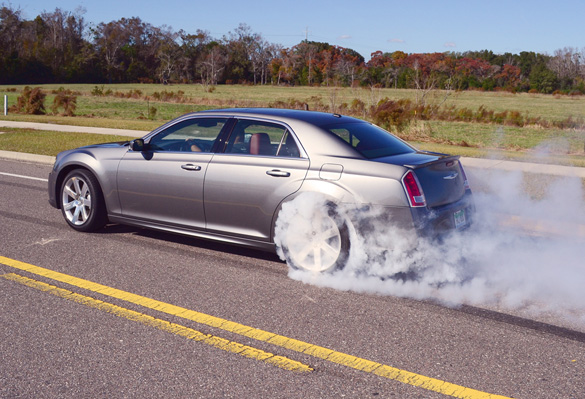 With the help of cylinder deactivation technology (Fuel Saver Technology), the new Chrysler 300 SRT8 is able to get 23 mpg on the highway. Not an excellent figure but it is an improvement over older SRT8 sedans. Unfortunately, the 300 SRT8 gets hit with a gas-guzzlers tax partly due to its low 14 mpg city EPA estimate. Possibly, a new 8-speed automatic, said to be in the works for next year, will improve fuel economy to at least avoid the extra taxation. During my city travels in the new 300 SRT8 I averaged 16 mpg. On the highway I saw a steady figure of 22.5 mpg traveling at 65 mph. 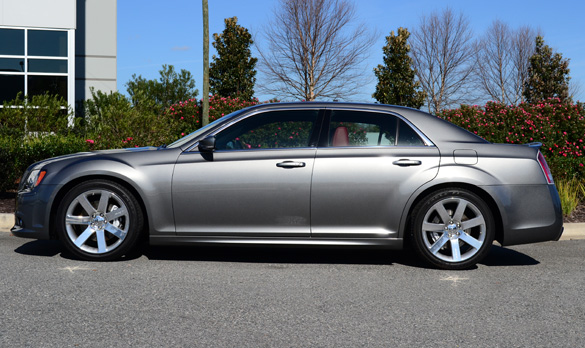 It is no denying that the new 2012 Chrysler 300 is a big vehicle. In the 300’s SRT8 trim level, the 6.4-liter 392 HEMI gets an excellent support network to compensate for the 300’s size and 4,365 pound curb weight. This “support network” is compromised of a beefed up suspension system with active-adjustable dampers, bigger disc brake rotors with Brembo calipers up front, forged 20-inch wheels shod in 245/45 Z-rated rubber, and revised front/rear fascias for a mean look.  The darkened grill, darkened headlights, rear spoiler and rear diffuser covering 4-inch chrome exhaust tips only add to the 300 SRT8’s performance oriented character. 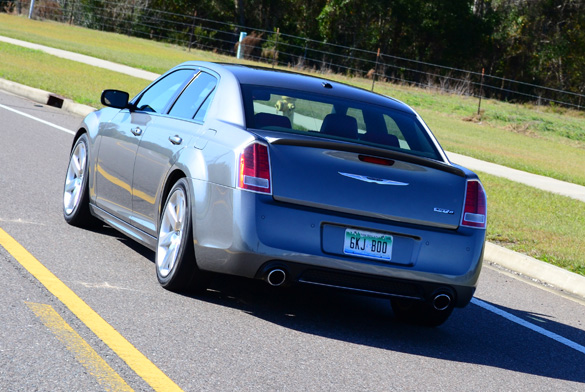 Surprisingly, when you get down and dirty with the new 2012 Chrysler 300 SRT8 pushing it to its limits, it keeps its composure for such a large car. The rear suspension is very soft for a sedan that has 470 horsepower. However, a Sport mode hidden within the 300 SRT8’s 8.4-inch LCD touch screen controls menu will stiffen the dampers eliminating the float in the rear for better stability. Additionally, the sport mode will add weight to the hydraulic steering rack and change shift patterns for optimal performance.  The Dodge Charger SRT8, has a rear suspension setup that is said to be about 40% stiffer than it’s sibling the Chrysler 300 SRT8.  Suspension, exclusively tuned for the 300 SRT8, is one item on a very short list of unique characteristics that set the Charger SRT8 apart from the 300 SRT8. Otherwise, they share an identical drivetrain.

Performance mixed with a quant taste of luxury is where the Chrysler 300 SRT8 is positioned. When compared to the 2012 Dodge Charger SRT8, the 300 SRT8 blends a bit more luxury into the equation aside from virtually identical straight-line performance. When all of the performance attributes of the new 300 SRT8 are working in sync, you are able to reach 60 mph in a quick 4.5 seconds, run a full quarter mile in 13.0 seconds and have the confidence to throw it into sharp corners on a race track. Those figures will easily leave the BMW 550i glancing at the 300 SRT8’s LED taillights while listing to the HEMI’s rumble fade into a distant memory. Although the new 300 SRT8 won’t bite back at the Cadillac CTS-V, it tends to keep German competitors on their toes. 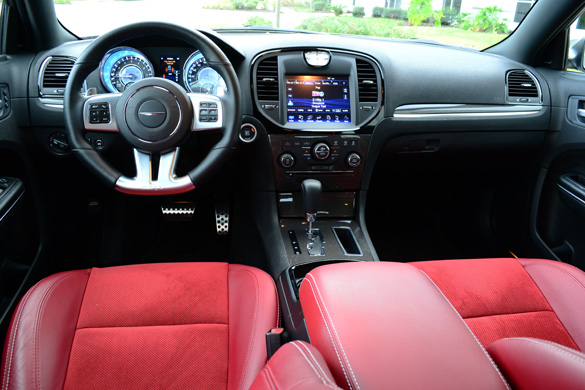 On the inside of the 2012 Chrysler 300 SRT8, the cabin falls a little short of expectations on a vehicle just over $50 grand. This is not to say that the interior of the Chrysler 300 SRT8 is cheap by any means. After-all, the dashboard is wrapped in leather, the bright bluish cluster gauges instantly pop into focus, deeply bolstered heated and ventilated leather front seats with suede inserts are supportive yet comfy, carbon fiber trim laces the dash and shifter areas, and the touch-screen interface integrates most vehicle controls nevertheless proving to be user-friendly. 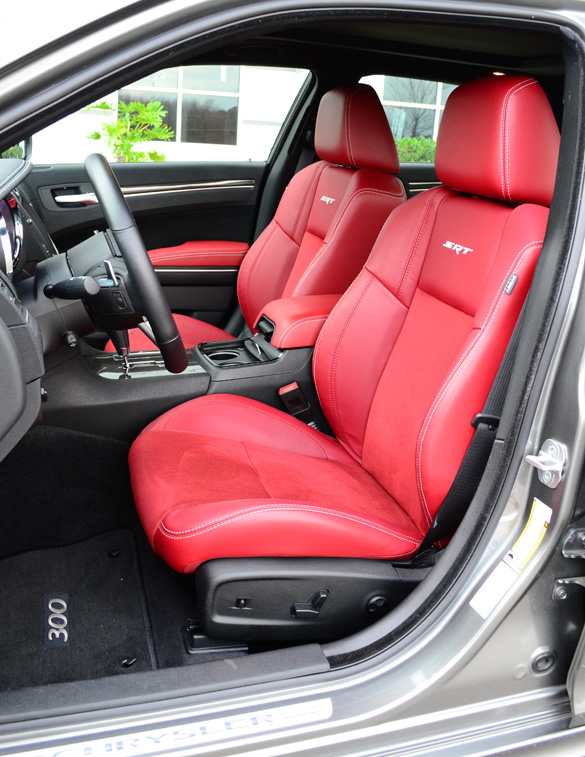 During our previous review of the 2011 Chrysler 300C, I took special notice to the new 8.4-inch screen and the upgraded Chrysler Uconnect system. The new 2012 Chrysler 300 SRT8 takes the system even a step further by integrating vehicle performance data, something that the SRT brand has offered for a few years now in a much smaller two-tone screen in the dash cluster. This time, by allowing the driver to interact with SRT vehicle performance data via a “Performance Pages” option on the large 8.4-inch LCD touch-screen, the driver and passenger are better able to read and decipher data on the fly. For instance, the G-force meter is now an easy-to-see graphic representation in full color for metering g forces. Additionally, the SRT vehicle performance data screens allow the driver to record acceleration times and braking times. For those compelled to utilize this data for driver improvements, Chrysler throws in a one-day SRT driver school when you purchase a new Chrysler 300 SRT8. This is further proof that the new 2012 Chrysler 300 SRT8 may serve as a dual-purpose vehicle satisfying you on daily commutes as well as on the track.

Putting performance on the back burner, which is hard to do in the new 2012 Chrysler 300 SRT8, you may take notice to other excellent aspects of such a dynamic vehicle. For starters, the heated and cooled front cup holders are an intuitive part of the new Chrysler 300. Moreover, the optional dual-pane panoramic sunroof with a power shade adds a bit of functional elegance to the equation. My test vehicle’s adaptive cruise control (radar cruise control), collision alert, blindspot monitoring, rear fog lights, and cross-path detection, all part of an optional SafetyTec package, adds convenience and safety. The 900-watt 18-speaker system sounds good but suffers from abnormal vibration sounds from the rear panel. 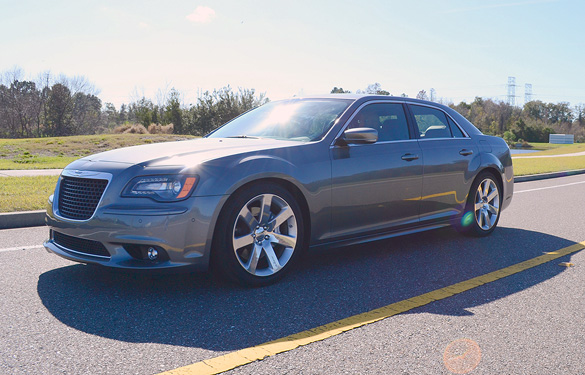 The all-new 2012 Chrysler 300 SRT8 beckons to be the only vehicle in your stable as it proves to be a capable performer on the track and at the same time, a favorable luxury vehicle for those long commutes or road trips. The SRT division has continued a tradition of being exceptional at offering performance versions of many vehicles that would otherwise require owners taking to aftermarket venders potentially costing thousands more. With that in mind, having an as-tested price of $54,430 I can honestly say that the new 2012 Chrysler 300 SRT8 is worth every penny. 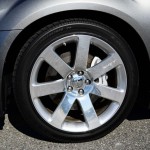