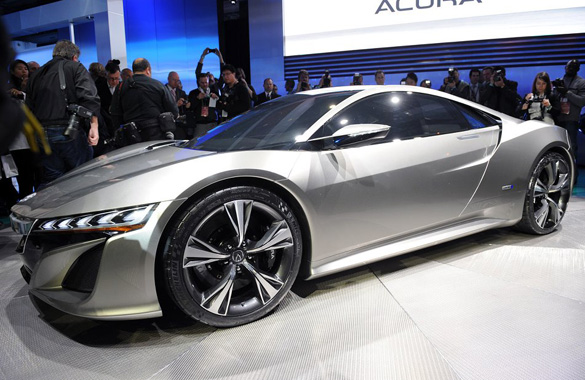 The infamous Acura NSX has been a long-time favorite amongst automotive enthusiasts. It has also been a long wait to see a new NSX make its way back onto the streets even if current economic forecasts says this is the worst time to market such a vehicle. Why do it? Because someone will buy it and others will cherish the heart-felt love for such an amazing sports car. 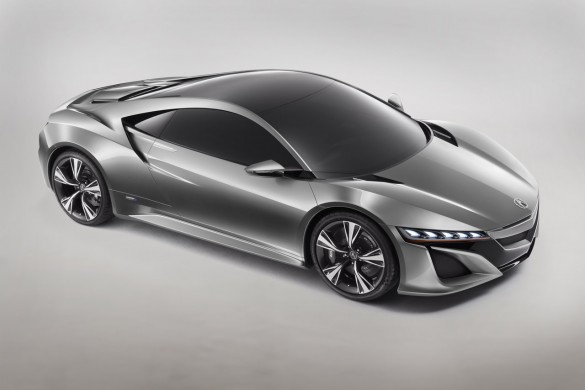 Today at the North American International Auto Show in Detroit, Acura has taken the wraps off of the new NSX Concept vehicle. Powered by a V6 engine mounted behind the vehicle’s two occupants, the new engine will be assisted by electric motors. Yes, the new NSX will be a hybrid but more in the sense of a very fast hybrid due what is said to be an “extremely favorable power-to-weight ratio.” 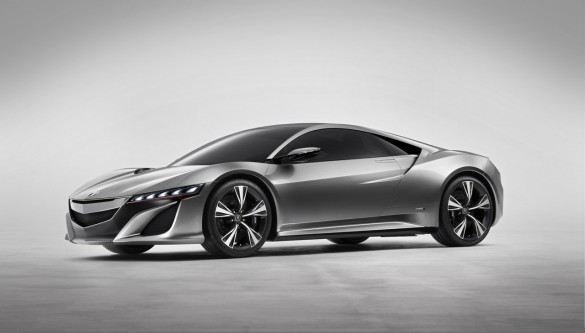 Honda has aimed at making the new Acura NSX fuel efficient yet retaining supercar status. Power will be diverted to all 4 wheels through Acura’s latest SH-AWD (Super Handling All-wheel-drive system) with an electric motor in a dual-clutch transmission setup. Acura calls it a “unique 2 Electric Motor Drive Unit with a Bilateral Torque Adjustable Control System.” The system altogether combines a total of 3 electric motors and a next-generation direct-injection VTEC V6 engine. 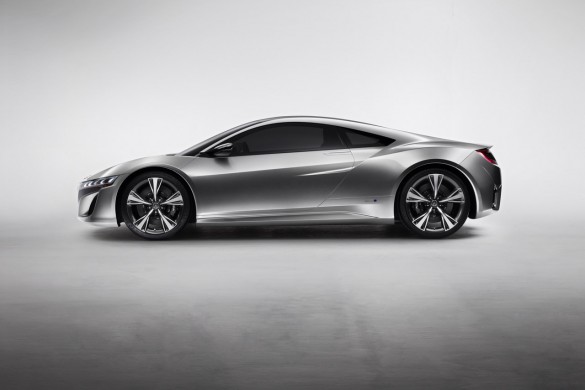 “This Sport Hybrid SH-AWD system will make NSX the ultimate expression of Acura’s idea to create synergy between man and machine,” said Takanobu Ito, president and CEO of Honda Motor Co., Ltd. “The NSX will make the driver one with the car to enhance dynamic driving abilities without getting in the way.” 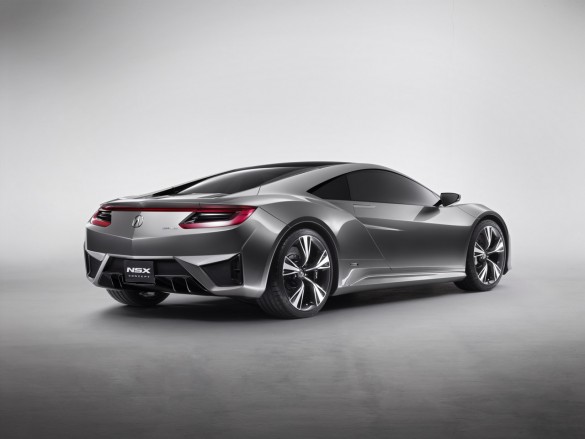 Acura is keeping tight-lipped about horsepower figures for now. With a V6 engine and a total of 3 electric motors, the power output should be “enough” to keep most of us interested. We hope. 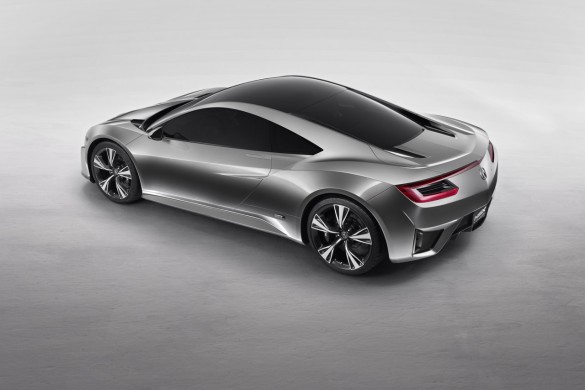 A production version of the new NSX is expected within the next three years. That is a lot of research and development time. Maybe by then we could expect the ultimate hybrid supercar that will hang with the likings of some of the fastest sports cars. 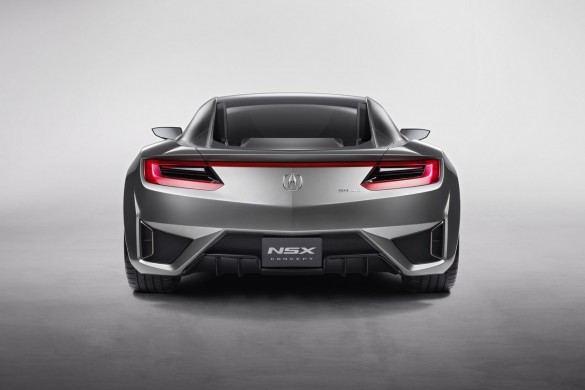 Hit up the official press release below for additional Acura NSX Concept information.

DETROIT, Mich., Jan. 9, 2012 – Representing the leading edge of a wave of new products and technologies, Acura today unveiled three new vehicles at the North American International Auto Show, including a concept version of the all-new gateway to the Acura brand, the ILX luxury compact sedan; a prototype of the 2013 RDX crossover sport utility vehicle; and the NSX Concept, which presages the direction for Acura’s next-generation supercar.

Acura also announced that the next-generation NSX will feature Acura’s innovative new Sport Hybrid SH-AWD® technology and that the vehicle will be developed by Honda R&D Americas and manufactured in Ohio.

“Over the next 24 months the Acura brand will unleash a series of new models that will remake our product lineup and shake up the luxury market,” said Jeff Conrad, vice president and general manager of Acura. “Acura will once again defy conventional wisdom to become one of the top luxury brands by creating luxury vehicles based on our own unique values.”

Acura ILX Concept
The Acura ILX Concept is the precursor to an all-new Acura luxury compact sedan scheduled for launch in Spring 2012. To be positioned as the gateway to the Acura brand, the ILX will feature three different powertrains, including Acura’s first-ever gas-electric hybrid.

“First time luxury buyers place the highest value on exterior styling, affordability and environmental issues and that’s a virtual definition of what we have created with the new Acura ILX,” said Jon Ikeda, head of the Acura Design Studio. “The strategy behind this new model is to position ILX as the first opportunity for many young buyers to enter the luxury market.”

Sleek, sporty and aerodynamically efficient, the exterior of the all-new Acura ILX combines luxury, performance and efficiency. A beautifully styled luxury sedan, the ILX Concept has a compact, yet formal proportion, targeting a very professional image. The Acura ILX delivers both, with a low and wide stance and a long nose and a short tail that are aerodynamically efficient, the ILX is immediately recognizable as an Acura.

The ILX will feature a high–quality, well-appointed interior that is smart, spacious and sporty. It will offer a number of new, high-value features, including a smart entry keyless access system and pushbutton start, along with Pandora internet radio interface and SMS text message function for smart connectivity with the world.

As with all Acura models, the ILX will have a longlist of standard features, different trim levels (that will include a Technology Package), multiple transmission choices, and excellent standard safety features- including Acura’s acclaimed Advanced Compatibility Engineering™ body structure, front, side and side-curtain airbags, 4-channel anti-lock brakes and Vehicle Stability Assist™ (VSA™). Acura anticipates that the ILX will achieve top ratings in both NHTSA and IIHS crash safety testing.

The new ILX will be manufactured exclusively by Honda Manufacturing of Indiana, LLC, in its Greensburg, Ind. plant- one of only three plants in the world to receive J.D. Power and Associates’ 2011 Platinum Award for outstanding quality.

Acura RDX
Shown as a prototype version of the 2013 RDX, the second generation of Acura’s five-passenger crossover SUV will up the ante with a new approach to achieving both advanced performance and fuel efficiency via a new engine, transmission and all-wheel drive system.

The 2013 RDX, scheduled to launch in Spring 2012, will have as standard equipment a 3.5-liter V-6 engine that produces 273 horsepower- 33 more than the outgoing model. For even higher performance and improved fuel economy, the RDX makes use of a 6-speed automatic transmission with a new lock-up torque converter. The RDX also gets a new, lighter all-wheel-drive system that provides the required performance and safety with increased efficiency.

With anticipated EPA fuel economy ratings of 20 mpg in the city and 28 mpg on the highway, front-wheel-drive models of the 2013 RDX are expected to offer the best fuel economy of any gasoline-powered luxury SUV in its class.

The RDX exterior incorporates a sleek, more aerodynamically efficient body, evolving RDX from a sporty, compact SUV to a more formal look with a longer, sculpted hood and styling that is more elegant and sophisticated to match the Acura philosophy of timeless, beautiful design. Chassis updates include a longer wheelbase and wider track, all-new Amplitude Reactive Dampers, and a new motion adaptive electronic power steering system.

Inside the 2013 RDX, new sweeping shapes, matte surface trim, and generous use of leather combine to give the RDX interior an upscale look and luxury feel that Acura customers have come to expect. Abundant use of sound deadening materials and Active Sound Control team to provide an exceptionally quiet cabin. Additional interior features, such as larger door openings, more passenger room, increased cargo volume and a power rear tailgate make the RDX interior even more accommodating and flexible.

As with the ILX, the 2013 RDX will receive a host of new technologies including Pandora internet radio interface, SMS text message feature, a smart entry keyless access system, pushbutton start, and a three view rear camera. An available Technology Package will provide a full complement of relevant technologies, including AcuraLink® Satellite Communication System, Acura Navigation System with Voice Recognition™, AcuraLink Real-Time Traffic with Traffic Rerouting™, and AcuraLink Real-Time Weather™ with radar image maps. New for 2013, the even more advanced navigation system utilizes a hard disk drive (HDD) with 60 gigabytes of storage capacity – including 15 gigabytes that can be allocated for music storage.

Acura anticipates that the RDX will achieve top ratings in both NHTSA and IIHS crash safety testing.

Production of the new RDX will move to the East Liberty, Ohio plant of Honda of America Mfg., Inc.- home to one of the four top assembly lines in North America in the J.D. Power and Associates’ 2011 Initial Quality Study (IQS). The first generation RDX has been built at the Marysville, Ohio auto plant, an IQS award winner for both of its assembly lines.

“This Sport Hybrid SH-AWD system will make NSX the ultimate expression of Acura’s idea to create synergy between man and machine,” said Takanobu Ito, president and CEO of Honda Motor Co., Ltd. “The NSX will make the driver one with the car to enhance dynamic driving abilities without getting in the way.”

While most supercars opt for brute force delivered from a large engine, the NSX Concept champions the true racing philosophy of an extremely favorable power-to-weight ratio.
“Like the first NSX, we will again express high performance through engineering efficiency,” added Ito, who led the development of Acura’s first NSX supercar. “In this new era, even as we focus on the fun to drive spirit of the NSX, I think a supercar must respond positively to environmental responsibilities.”

The new Acura supercar, expected to debut in the next three years, will be developed by an engineering team led by Honda R&D Americas, Inc., and manufactured in Ohio, at a yet to be named facility.