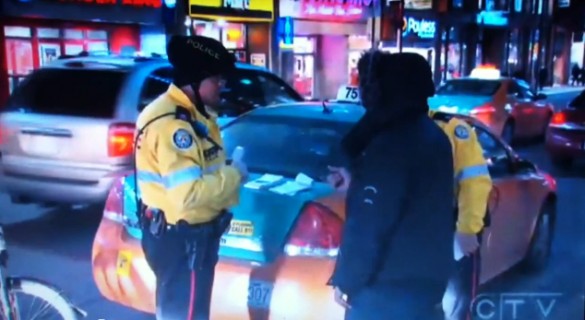 It’s a well known fact that our neighbors north of the border have very little sense of humor when it comes to street racing. In fact, those of us in the country to the south would have concerns about even passing another car on a Canadian highway, lest we be stopped for racing, or worse, “stunt driving.”

Apparently that’s a problem for taxis in Toronto, too, and a pair of drivers recently found themselves on the wrong side of the law. As Autoblog, via Autoblog Canada, reports, the two cabbies were pulled over for “stunt driving” down Toronto’s Younge Street, which has the distinction of being the longest street in Canada. As you’d guess, Younge Street once had a reputation for being a street racer’s paradise, as least when it wasn’t snow-packed.

Stunt driving comes with a seven-day license suspension and allows police to impound the vehicles involved. We’re sure the cab companies have already gotten their property back, but we’re less sure about the job security of the drivers involved in the incident.

We don’t condone street racing, especially on pedestrian-clogged avenues. However, we’ve spent plenty of time in the back seat of NYC taxis and lived to tell about it. If you want to see stunt driving, climb into the back of a New York City cab at rush hour, and tell the driver there’s a $20 tip if he can get you cross town in fifteen minutes or less.