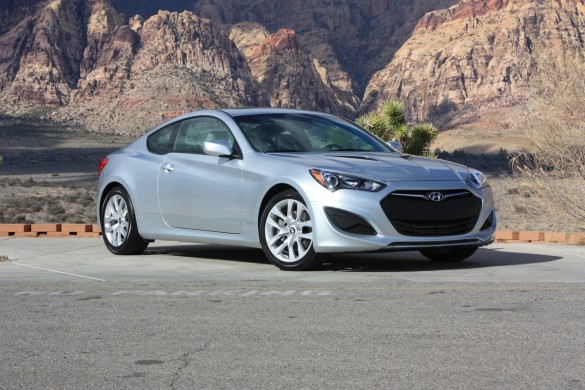 When Hyundai’s Genesis Coupe arrived on these shores in 2009, no one really knew how to take the upstart Korean sport coupe. Yes, it was attractively styled (if a bit conservative), and came packing performance bits like Brembo brakes, a Torsen limited slip differential and even adjustable camber bolts on the front suspension on track-centric models. Better yet, it boasted a traditional front engine, rear drive layout, and came in models for virtually every taste and budget. 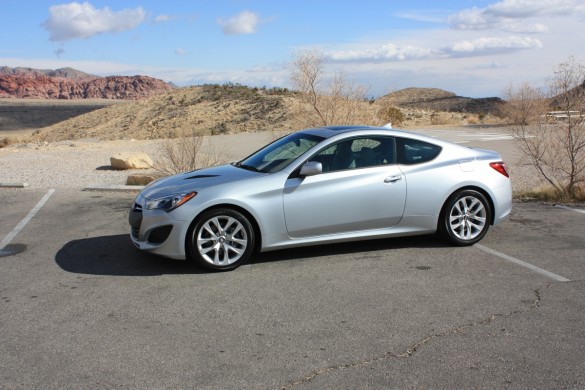 Both the 2.0-liter turbocharged four-cylinder and the 3.8-liter V-6 Genesis Coupes soon won fans and critics alike. Those in the pro-Genesis-Coupe camp praised the car for its affordability and handling, while those opposed to the Genesis Coupe panned the car for its cheap interior and lack of power. The forced-induction four, for example, made just 210 horsepower, which isn’t a lot to move a car weighing as much as 3,362 pounds (when equipped with the automatic transmission). Even the 3.8-liter V-6 was good for just 306 horsepower in a coupe that weighed up to 3,397 pounds; while the original car’s performance was “spirited,” we don’t recall anyone calling it impressive. 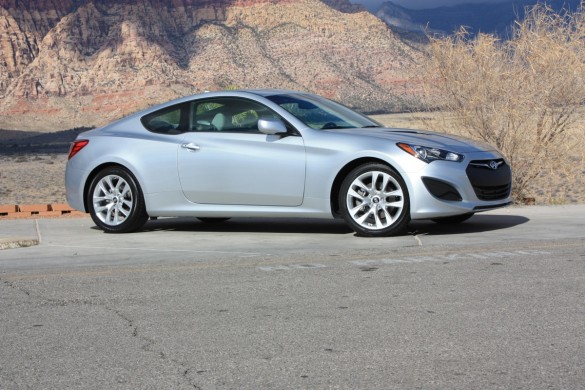 More than any other automaker on the planet, Hyundai listens to its fans and critics alike. When it came time for the Genesis Coupe’s mid-cycle refresh, Hyundai could have taken the path of least resistance by tweaking the exterior styling, adding a few more horsepower and perhaps offering a new interior color. Instead, the automaker made significant improvements to the car’s styling, gave both engines a serious boost in horsepower and raised interior quality above most others in the segment. 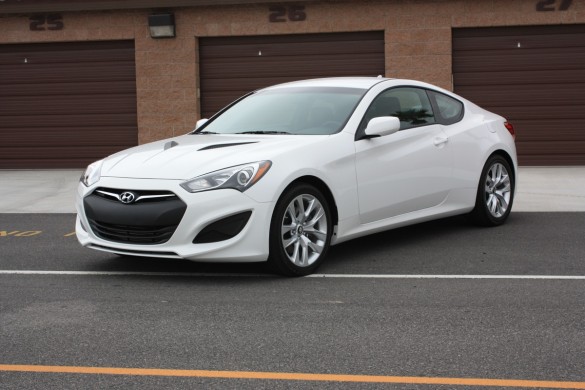 If it sounds like we’re impressed with the 2013 Genesis Coupe, we are. Before we even fired up the engine for the first time, it was impossible not to notice the bold changes to exterior styling. First, Hyundai’s now-familiar hexagonal grille is used to great effect on the Genesis Coupe, creating a front end that looks far more menacing than the previous generation. Wing-shaped faux-vents on the hood, offset by sculpted creases, give the car a much more commanding presence. The new Genesis Coupe looks like a sport coupe, while the old version looked disturbingly like an economy car. 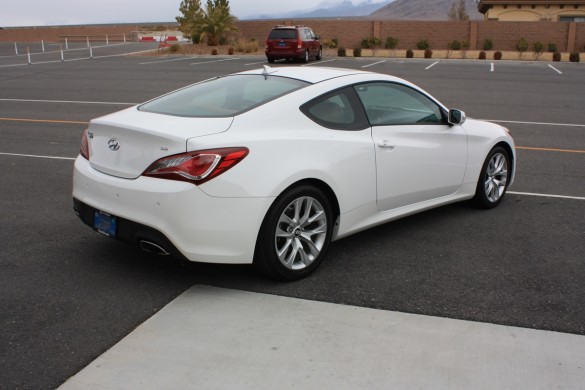 Hyundai kept the styling elements that worked well, so the new coupe carries over the unique plunging beltline and strong character lines that made the last Genesis Coupe distinctive in profile. Exhaust outlets embedded in the rear fascia return, and although both front and rear lighting has been refreshed, it still bears a passing resemblance to the outgoing model. 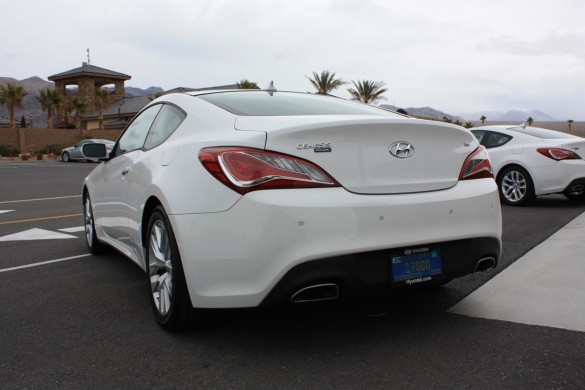 In short, Hyundai made the new Genesis Coupe more distinctive without making it flashy. From the revised sheet metal to the restyled 18 and 19-inch wheels, the 2013 Genesis Coupe will appeal to a wide audience of prospective buyers, and that’s not something we can say about many coupes or sedans with sporting intentions. 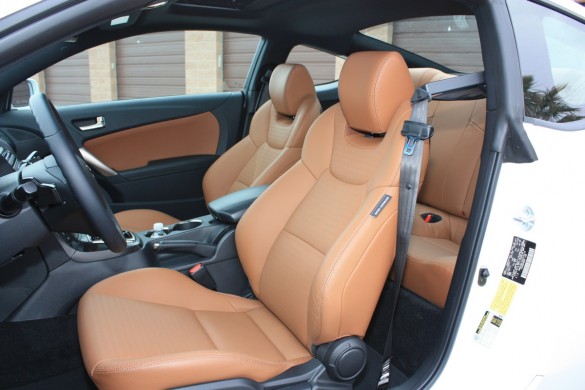 Inside, Hyundai has worked hard to improve the quality of materials used. The dash is now topped with a coarse-grained, soft touch vinyl, complete with stitching for an added touch of class. Plastics used are lower in gloss, adding to a higher quality appearance, and Genesis Coupe models can be had with cloth, leather or combined cloth and leather seating. 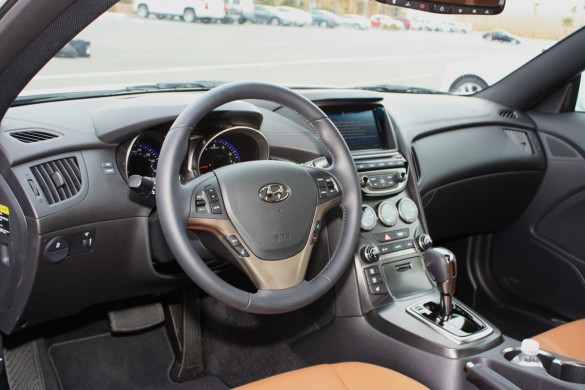 The wing-shaped styling elements seen in the grille trim and hood are reflected in the Genesis Coupe’s center stack, which now includes a three gauge cluster for a sporty appearance. Metallic trim is used throughout the interior, and Hyundai employs an eye-pleasing blend of aluminum and dark titanium.

We’d stop short of calling the interior perfectly executed, since there were a few things that could be improved. First, the instrument faces appear to be pulled from the Sonata parts bin, and they seen a bit too plain for a halo sport coupe. Even dressing up the numbers by changing the font would go a long way towards improving the gauges’ appearance. We’re baffled by the choice of center-stack gauges, too; why bother to include a vacuum-based “fuel economy gauge” on a sport coupe? Why include oil temperature, instead of the more critical oil pressure?

One area we’re not complaining about is the Genesis Coupe’s front seats. Whether you opt for the base model’s cloth seats, the R-Spec’s cloth seats with leather bolsters or the full-leather seats available in Track and Grand Touring models, the front seats are both bolstered enough for serious driving and comfortable enough for long days behind the wheel. As is the case with competitive cars, the Genesis Coupe’s rear seats are for children and cargo only.

Hyundai has upped the output on both available engines for 2013. The 2.0-liter turbocharged four now makes 274 horsepower and 275 pound-feet of torque on premium fuel, thanks to a new twin-scroll turbocharger and a larger intercooler. Choose to run regular gas, which Hyundai says is fine, and the car will still produce 260 horsepower and 260 pound feet of torque. 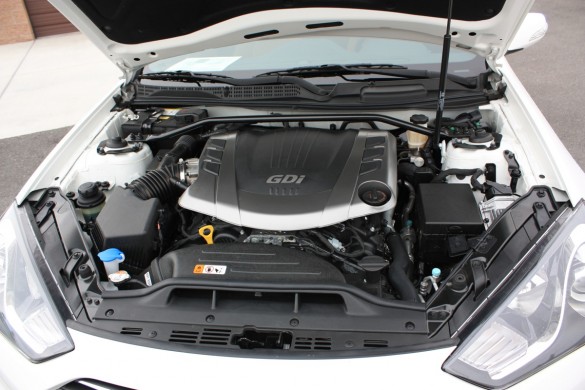 If you believe that there’s no replacement for displacement, the 3.8-liter V-6 will probably be more to your liking. Thanks to direct injection, it’s now good for 348 horsepower and 295 pound-feet of torque on premium gas, or 344 horsepower and 292 pound feet of torque on the cheap stuff. Both engine choices come mated to either a six speed manual or a new, Hyundai-developed, eight speed automatic with paddle shifters.

With significantly more power on tap, you’d expect the driving experience to be greatly improved, and you’d be correct. The 2.0 liter feels a bit slow to build boost, even with the twin-scroll turbo, but that only adds to the car’s character. Once pressure is built up, the turbo four pulls surprisingly hard to redline, and it’s easy to forget that you’re not behind the wheel of a small six-cylinder. If there’s a drawback to the 2.0T engine, it’s noise: at high rpm, the engine is loud in the cabin. Some may enjoy the sound, but those looking for a bit more refinement will probably want to shop the 3.8-liter V-6. It isn’t a deal-breaker for us, since under normal driving conditions the 2.0T sounds just fine.

The 3.8-liter V-6, on the other hand, is an aural treat. Hyundai has incorporated a “sound generator” tube on V-6 models to pipe engine noise into the cabin, and that’s a very good thing. The 3.8 in the Genesis Coupe is the best-sounding engine Hyundai has ever produced, and if we owned one, we’d wind it out often just to hear that mechanical music. Auditory pleasure aside, the new 3.8 liter V-6 is an improvement over the outgoing model, but it doesn’t pull quite as hard as we expected it to in the midrange. You won’t notice this in day-to-day driving, but you’ll spot it when winding the car out on a track. We suspect the aftermarket has a solution for this, so it wouldn’t keep us from giving the car a serious look. 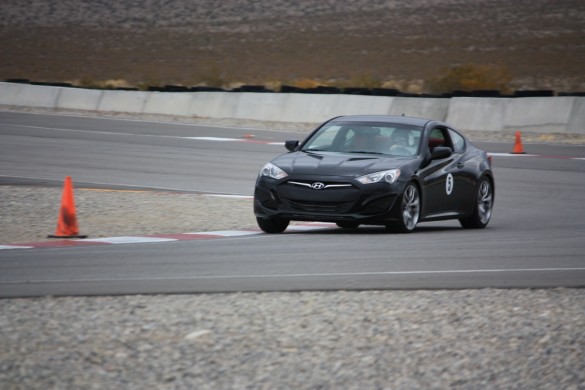 We were give the opportunity to drive both 2.0T and 3.8 models as hard as we wanted at Nevada’s Spring Mountain Motorsport Ranch, and both versions on-track performance was impressive. Spring Mountain has some challenging corners, designed specifically to test the handling balance of a car and the nerve of its driver. A particularly nasty example is a cresting, off-camber right-hand corner that sets up a run onto a short straight. Brake too early, and you’ll lose seconds on your lap. Brake too late, and your car’s suspension will unweight as you crest the hill, taking grip when you need it most.

Corners like this test the handling prowess of any car, and both versions of the Genesis Coupe passed the test with flying colors. The 3.8-liter was a bit heavier in the nose, and I felt as if I had to brake quite a bit earlier. The 2.0T, on the other hand, seemed to relish the challenge of braking as late as possible for the corner. In fact, the 2.0T was an easier car to drive at the limit, and I quickly got into the rhythm of “brake, downshift, trail brake, on the gas, apex” in tight corners. The rear was easy to balance with the throttle, and the slight turbo lag allowed me to get on the gas just before the apex of each corner. There are cars I’ve enjoyed more on a track than the 2.0T Genesis Coupe, but not in this price range. 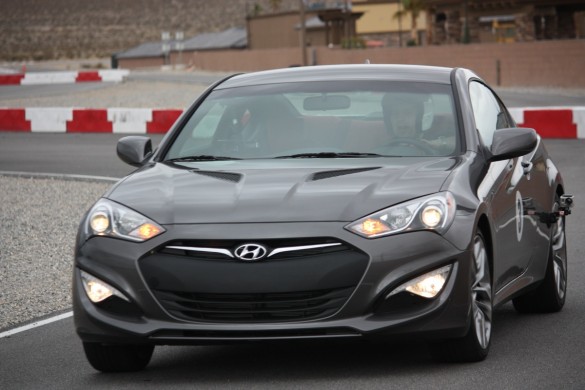 That said, if track days weren’t our thing, we’d opt for the 3.8 liter Genesis Coupe. It’s a better car for the day-to-day grind, and it’s got the better soundtrack when you step on the gas. Since we’re fans of the occasional track day and autocross, out money would go for the 2.0T R-Spec, which would still be a decent daily driver. In fact, that may be the best part of the Genesis Coupe: unlike others in the segment, the car doesn’t punish the driver with a harsh ride or a peaky engine. The steering and brakes are superb, and the Genesis Coupe can be equipped with near-luxury levels of content if comfort is your primary focus.

It may well be the most livable sport coupe on the market, in terms of both ride quality and affordability, and we’d give the new Genesis Coupe a serious look if we were new car shopping.