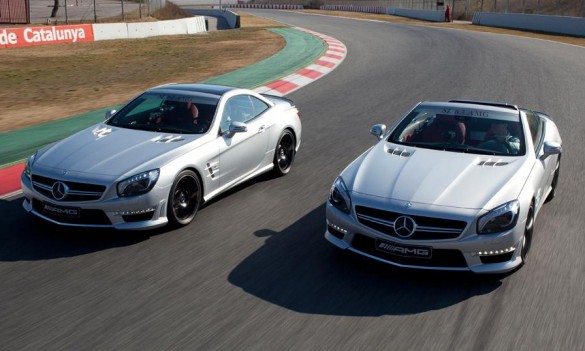 After all of the spy shots and speculations, Mercedes-Benz finally officially revealed the 2013 Mercedes-Benz SL63 AMG in conjunction with the launch of the Mercedes AMG Petronas F1 W03 race car in Spain.

Their latest edition to the AMG line of performance vehicles comes with a familiar design and powerplant. The infamous M157 twin-turbo 5.5-liter V8 engine, laying 530 horsepower to the rear wheels (557 hp via optional Performance Package), is good for launching the new SL63 AMG to 60mph in 4.2 seconds. The same engine can be found in the new CLS63 AMG, E63 AMG, S63 AMG and ML63 AMG.

The added power is always wanted but Mercedes-Benz AMG engineers were able to accomplish the task with a 30% better fuel economy and tip the scale 276 pounds less when compared to its predecessor. Other hallmark features of the new SL63 AMG are larger cooling ducts, a deeper front bumper, AMG-specific LED daytime running lights, widened sills, a deck spoiler, V8 Biturbo badges and an integrated rear diffuser on top of four trapezoid-shaped exhaust tailpipes. A new roadster version will feature an aluminum retractable hard-top roof that folds in 20 seconds.

Additional details of the new 2013 SL63 AMG will be unveiled February 22nd.