Chevy Sells A Third Of The Sports Cars In The U.S. 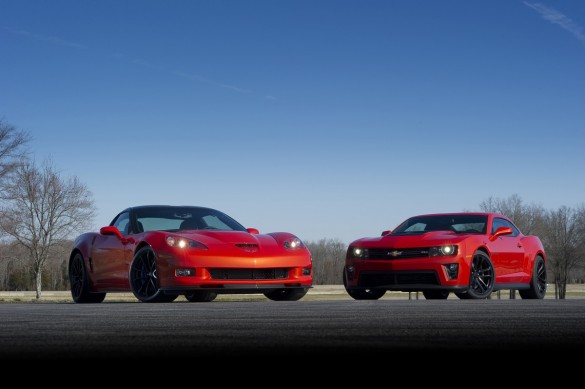 In 2011, the Chevrolet Camaro earned a 37-percent share of the sports car market in the United States, while its Corvette sibling picked up 28-percent of the luxury sports car market. Some 88,249 customers took delivery of a new Camaro last year, while 13,164 buyers snapped up a Corvette. The Camaro’s closest rival was the Ford Mustang, which sold 70,438 units last year, followed by the Dodge Challenger, which sold 39,534 copies. The Corvette, on the other hand, more than doubled the sales of its closest competitor, the Porsche 911, of which just 6,016 examples were sold.

GM’s North American president, Mark Reuss, attributes the success to the cars’ flexibility, saying, “Unlike many competitors’ performance cars, the Corvette ZR1 and Camaro ZL1 are appropriate for both daily drivers and track use from the factory – with standard coolers for brakes and drivetrain.” In other words, both cars can be used to win on Sunday, commute on Monday.

Chevy has even bigger goals for 2012 with the launch of the Camaro ZL1, which packs some 580 horsepower from a supercharged, 6.2-liter LSA V-8. At Virginia International Raceway, the ZL1 recently shaved six seconds off the published lap time of a 2011 Shelby GT500 Mustang, but don’t expect the ZL1 to be top dog for long. Ford is bringing a 650 horsepower Shelby GT500 to market in 2013, and we expect it will rise to the challenge of beating the ZL1’s lap time.

At the end of the day it’s academic, since there are Ford guys and there are Chevy guys. Regardless of which car is faster, we doubt performance will be enough to change a hardcore fan’s mind.