The Mazda2 Versus The Wall Of Death: Video 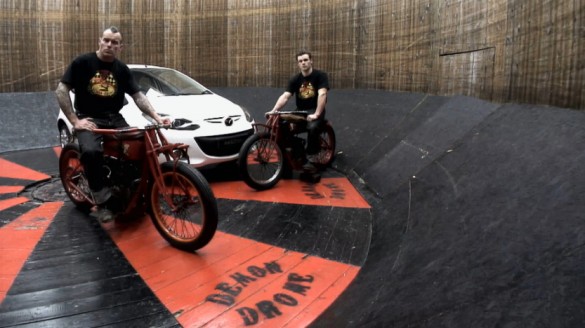 The “Wall Of Death” is a popular carnival attraction, generally starring motorcycle riders who seemingly defy gravity by riding vintage iron on the vertical walls of a large wooden bowl. There’s physics behind the spectacle, and what at first seems impossible (or at best, just incredibly dangerous) really just relies on velocity and centrifugal force. It’s perfectly safe unless the motorcycle suddenly loses momentum, in which case bike and rider plummet back to earth in a rather unpleasant fashion.

Some shows also incorporate microcars into their Wall of Death shows, since the same principles apply. As long as you’ve got enough velocity, four wheels can be made to stick to the wall as well as two wheels. The trick, it seems, is to use a bowl with the smallest possible diameter.

We’ll admit to being skeptics the first time we watched the video, but we’re believers now. We wouldn’t try this at home, even if we had a Wall of Death in our backyard and a Mazda2 in our driveway, but the science behind it is solid. As they say on Mythbusters, this stunt is completely plausible.