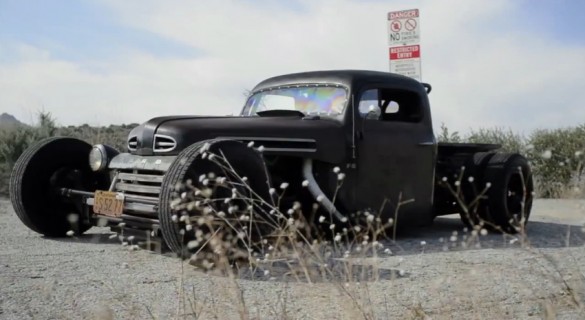 Mike Musto is the car guy’s car guy. He’s run Bullrun, campaigned a vintage Dodge Charger called “Mr. Angry” in One Lap of America and has forgotten more about the pro-touring scene than you or I will ever learn. Now he’s got his own weekly series on YouTube’s Drive channel called “Big Muscle,” and if the first episode is any indication, it will be worth tuning into.

What do you get when you cross a 1949 Ford F5 dump truck with a 1997 Ford F350 diesel and a 1935 Miller Indy Car? We’re not sure, either, but the end result is the one-of-a-kind rod seen here, built by Max Allread. If it’s performance you want, Allread’s truck won’t disappoint – it’s packing 400 horsepower and 700 pound-feet of torque under its hood.

That’s impressive, but the detail on the build is even more amazing. Those stencils on the doors? Original to the truck, which was last registered in 1985. Those aircraft-style seats? Allread built them himself. The front suspension? Inspired by a vintage Indy car.

Now matter how well built, most rods don’t capture your attention for long, but Allread’s seems to cross generations and demographics. From any angle, there’s always something to look at, and it’s impossible to view the truck without wanting to jump in and go for a ride. We’re not even into the hot rod scene, but we’d love a chance to spend a day with Allread’s Dr. Frankenstein creation. It’s a sculpture that even we can appreciate.