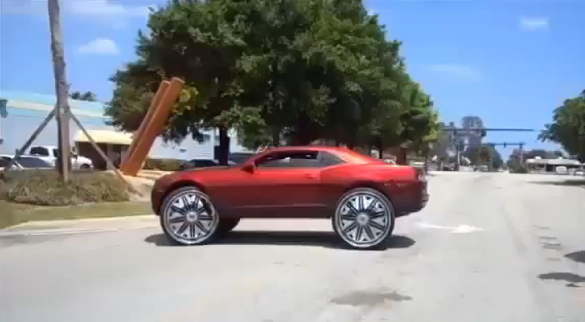 We might as well give you this disclaimer up front: we’re about cars that go fast, not about cars that look, frankly, like something that belongs in a circus. A donked-out Caprice or Crown Vic is one thing, since even in stock form the cars handled like an apartment complex on wheels. If rolling on 22s is your thing, there’s no shortage of Crown Vics to be had on used car lots from coast to coast.

On the other hand, a Camaro rolling on 32s (and worse, spinner 32s), like this example caught on Inside Line, just looks ridiculous. Worse, it adds a massive amount of unsprung weight and raises the car’s center of gravity, both of which are the enemy of handling. We doubt those stretched-rubber-band tires were made for performance, either, so cornering at even posted speeds would be a challenge.

We’re sure that finding tires for 32-inch wheels isn’t easy, and even made-in-China brands would have a hefty price tag due to their rarity. Since the tire’s life span (without any sidewall to speak of) would be exactly one pothole, we could see this ride being as expensive to own as a Veyron.

If you have a friend who thinks this looks good, it’s time for an intervention. Friends, after all, don’t let friends mega-donk.