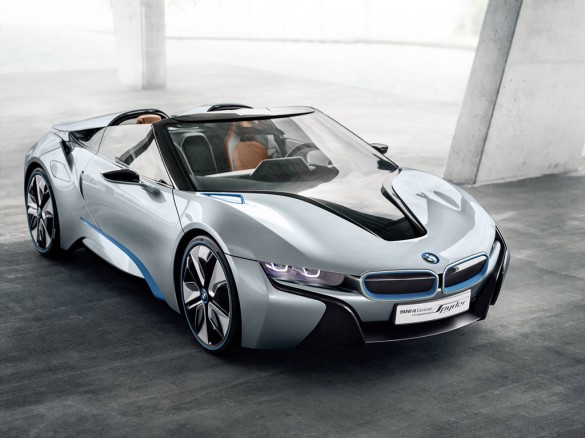 What appears to look almost identical to the coupe version, is the BMW i8 Concept Spyder revealed this week at the Beijing Motor Show.

BMW plans to join the rankings of automakers with plug-in-hybrid powertrains with the new i8. In a Spyder-to-down version, the BMW i8 Concept Spyder features many design aspects that make it unique but very recognizable within the BMW line of vehicles. The i8 Concept Spyder has a semi-transparent hood, upward opening doors, laser headlights and a spoiler integrated into the windscreen.

The inside of the BMW i8 Concept Spyder is just as intriguing as its distinctive exterior. Carbon fiber trim and piano black pieces accent the leather appointed interior while the fully digital instrument cluster brings a new level of tech by offering a 3D iDrive display.

The BMW i8 Concept Spyder is powered by a plugin hybrid eDrive drivetrain with a total of 349 horsepower and 406 ft-lbs. of torque. This power is derived from a 129 hp electric motor and a 220 hp 3-cylinder gas engine. Working in perfect harmony, the i8 Concept Spyder should be good for a 0-60mph run in 5.0 seconds and top out at 155 mph. This level of performance is achievable while still getting an average of 78.4 MPGe when calculating in the estimated 19 total miles of full electric driving.

Look for vehicles such as the BMW i8 to be the wave of the future bringing a new level of style, luxury, performance and above all, unprecedented efficiency.

BMW i8 Concept Spyder with BMW eDrive in Beijing. New designation for the drive technology of all future electric and plug-in hybrid cars.

Munich/Beijing. The BMW i8 Concept Spyder is celebrating its world premiere at the Auto China 2012 in Beijing (23 April – 2 May 2012) and the rear-end of the car clearly bears the eDrive emblem for the new technology. In future, the designation eDrive will identify the drive technology for all electric and plug-in hybrid cars from BMW i.

BMW eDrive comprises the components of the electric drivetrain: the electric motor developed in-house by BMW, the lithium-ion battery, and finally the intelligent motor management system. This technology ensures that electromobility with BMW eDrive offers a unique experience. This is because the full torque of the electric motor is available from a standing start and the acceleration unfolds continuously in thoroughbred electric vehicles until the top speed is attained. Vehicles with BMW eDrive technology are therefore extremely agile and offer enormous driving pleasure. The lithium-ion battery cells and the intelligent motor management system also offer a substantial increase in range and power for the vehicle.

The future will see BMW eDrive technology empowering all electric drives – electric and plug-in vehicles from BMW i – giving them the capability for being particularly dynamic and smart.