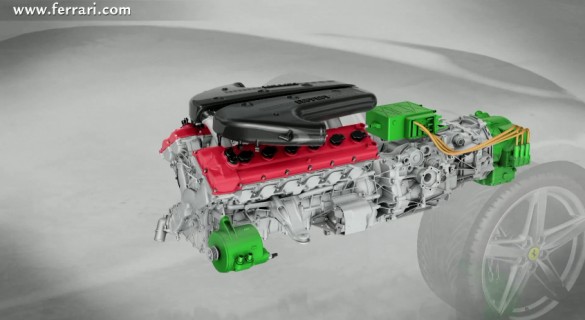 Progress is inevitable, so we’ll be the first to deliver the bad news: at some point in the not-too-distant future, most sports cars and exotics will utilize some kind of hybrid drive propulsion system. Unlike hybrids of today, expect the next generation hybrid drive systems to add performance benefits, instead of just adding weight and complexity. They’ll ultimately reduce fuel consumption, too, which is the goal of almost all hybrid drive systems.

At this week’s Beijing Auto Show, Ferrari is highlighting its HY-KERS 2012 hybrid drive system, believed to be heading for production in the Ferrari Enzo successor. If you’re familiar with hybrid systems already, there isn’t much new to see here, since the same basic formula of generator, batteries, controller and drive motor applies.

Ferrari has found a way to make the system more compact (and presumably lighter), which will ultimately help with acceleration, braking and handling. Battery packs are located as low as possible to lower the car’s center of gravity; better yet. they can be positioned to help achieve an ideal 50/50 front to rear weight distribution.

Based on Ferrari’s own numbers, the HY-KERS 2012 system is capable of delivering a 40-percent reduction in carbon dioxide emissions compared to an internal combustion engine with the same power output. Emissions and fuel economy are two critical design factors to automakers of all sizes these days, so don’t be surprised when similar hybrid systems begin to appear on more mainstream performance cars. Ultimately it’s more oa matter of when GM builds a hybrid Camaro Z/28, not if.