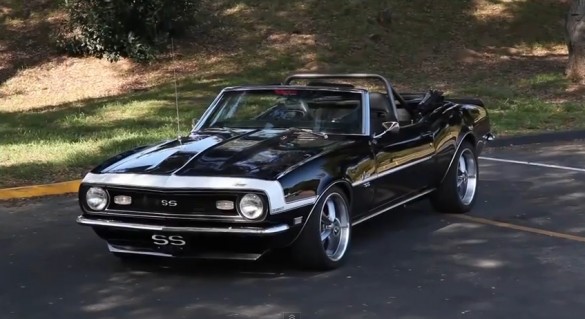 There are only a finite number of 1968 Camaros, in coupe or convertible form, left on the planet. Owning one generally requires careful stewardship, to preserve the car for future generations. If you want to keep it original, that means there’s very little you can do to improve the car or make it safer.

First, that’s no stock 327 V-8 beneath the hood. Instead, Hall’s ride uses an LSA V-8 pulled from a wrecked Cadillac CTS-V. Thanks to an overdrive pulley on the stock supercharger and a custom tune, the car makes some 800 horsepower at the crank, which translates to 648 horsepower at the rear wheels. The suspension and brakes have been updated to handle the additional power, and Hall regularly drives the car in autocross competition.

Inside is a very tasteful blend of old (the original gauges) and new (carbon fiber center console, Recaro seats). In fact, part of Hall’s intent was to not make any changes that couldn’t be undone, essentially preserving the car for future generations. That may change in the future, though, as Hall is looking for a way to get more tire underneath the car.

Congrats to Bob Hall for building such a masterpiece, and congrats to Mike Musto for finding the rhythm with Big Muscle. Here’s to more of the same in the coming weeks.