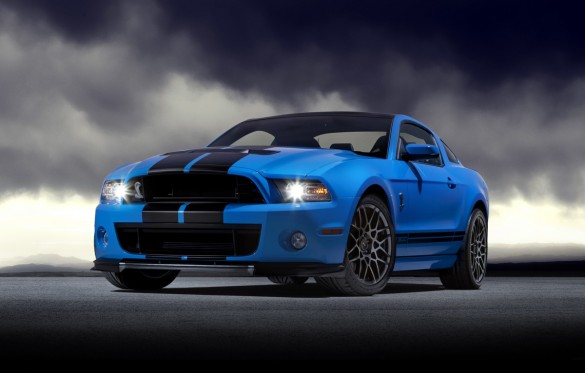 Last November we told you that Ford would launch a revised Shelby GT500 for 2013, complete with a 650-horsepower supercharged V-8. It turns out we were a bit wrong about the Shelby’s horsepower; according to the latest information from Ford, the new Shelby GT500 will actually produce 662 horsepower and 631 pound-feet of torque, which makes the car’s 5.8-liter V-8 the most powerful production V-8 in the world.

Think about that last fact for a second – the most powerful production V-8 in the world graces the engine bay of a Mustang, not a Ferrari or an Aston Martin or a Maserati. It beats the Camaro ZL1 by a significant 82 horsepower and 75 pound-feet of torque, and it even beats the Corvette ZR1 in output, at a little more than half the price (although we’re pretty sure the ZR1 will still be faster around a racetrack).

If that wasn’t impressive enough on its own, the new Shelby GT500 will even avoid a gas guzzler tax rating, and actually delivers better fuel economy (by one mpg city and highway) than the car it replaces. Compared to the Camaro ZL1, the Shelby GT500 will return one more mpg around town, but a significant five mpg more on the highway. Not that any buyers shop either car for its fuel economy, of course, and driven as intended fuel economy in the single digits is likely.

Ford is still claiming a top speed of “200 mph and beyond,” which is seriously impressive given the car’s blue collar roots. We’ve driven early GT500s on the track, so we can’t wait for a turn behind the wheel of the 2013 version, which (on paper at least) sounds like the most serious muscle car ever built.

Chevy, the ball is now officially in your court. Let’s see what you can do with the 2014 Camaro ZL1.