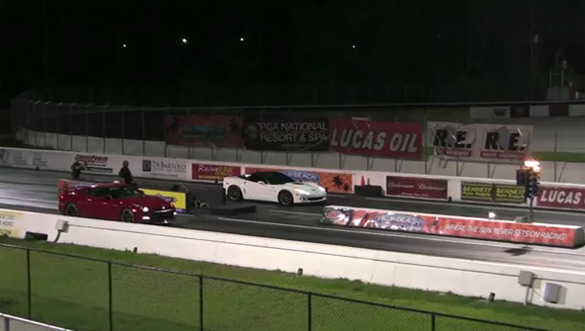 When we took the liberty of pushing the new 2013 Nissan GT-R to the limit at Palm Beach International Raceway (PBIR) and drag strip, our official run times were not recorded. For all we know, we could have been putting down consistent 10-second runs in the quarter mile. One GT-R owner, who recently took his new 2013 ‘Godzilla’ to the same track, was able to lay down a best run of 10.87 seconds in the quarter mile… all from a stock GT-R. Interestingly enough, the GT-R was able to lay down this time consistently run after run.

This time is on par with the short list of test drivers to get behind the wheel of a new 2013 Nissan GT-R and record official quarter mile times. We even listed these official times in our first drive of the 2013 GT-R.

Although some aftermarket tuners take the GT-R to near quad-digit horsepower levels, they have a hard time laying all of that power to the ground. The new 2013 Nissan GT-R is better than ever sporting 545 horsepower and 463 ft-lbs. of torque. One could argue that in stock form, the GT-R is at its best. The new GT-R’s 0-60mph time is only 2.7 seconds, just 0.2 seconds slower than the multi-million dollar Bugatti Veyron.

When it comes to the new Nissan GT-R, we are pretty sure MC Hammer said it best… “You can’t touch this”.