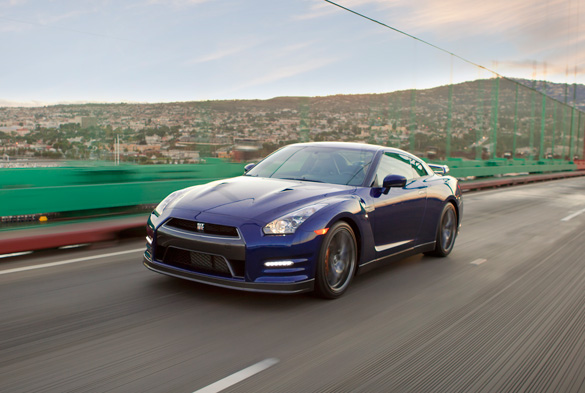 By now every knowledgeable automotive enthusiast has come to the conclusion that the Nissan GT-R makes a great effort at defying the laws of physics. After-all, just about every single review or test drive video reiterates this very testament. I would only be beating a dead horse if I were to tell you the same thing about the latest creation to come from Nissan’s performance masterminds. After driving the new 2013 Nissan GT-R, with an extra 15 horsepower (545 hp total) and 15 pound-feet of torque (463 lb-ft torque total) over the 2012 model year, the dead horse is getting pounded into oblivion.

The new 2013 Nissan GT-R received some minor changes such as slight re-tuning of the engine and suspension refinements. The shear engineering and development of the GT-R year by year proves how Nissan engineers are not only tweaking things, but also making the GT-R better. You can almost compare the GT-R to how Porsche has had a continual lineage of subtle improvements in the 911. It just so happens that refinements to many well-endowed sports cars end up improving power output and in some cases, efficiency. 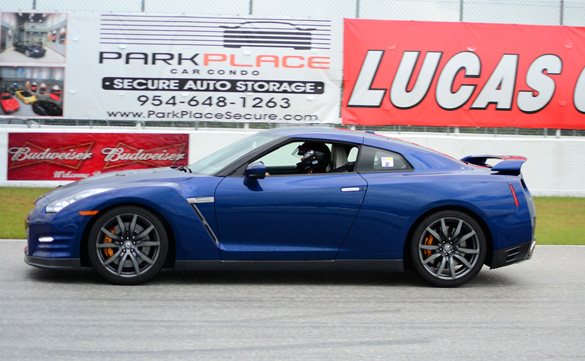 When it comes to being well-endowed in the performance arena, that is strictly the 2013 Nissan GT-R’s forte. Already, out of the gate, the 2009 Nissan GT-R shattered records and took vehicles costing over twice the price of a new GT-R head-on. To this day, you can still easily find an owner of the latest and greatest prancing horse out of Italy having some envy towards the performance capabilities of the GT-R. Sure, the GT-R may not be the best looking vehicle around, but those looks prove to be functional playing in its best interest when pushed to the limit.

I had the opportunity to visit Palm Beach International Raceway for what Nissan calls The 2013 Nissan GT-R Experience. The event is designed to allow journalists and a handful of lucky GT-R owners the opportunity  to ‘experience’ the capabilities of the new 2013 GT-R in a controlled race track environment. We had a chance to take the GT-R on an autocross course, drag strip, handling course and the full racetrack. The event was split into two full sessions, morning and afternoon, with only a handful of journalists on my particular day. I opted for the afternoon session, which was an excellent choice due to some torrential down-pours of rain during the late morning time. 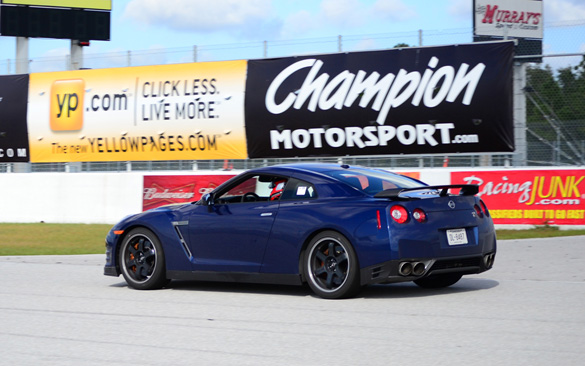 By time I arrived at the track, the rain letup but the track remained wet. This gave me the prime opportunity to experience the GT-R under slightly wet conditions on the autocross track. Nissan was generous enough to let us also experience the 2012 GT-R for a direct comparison to the 2013 model. I have to say, even though the contrast from 530 horsepower in the 2012 model versus 545 horsepower in the new 2013 is not that great on paper, there is a noticeable difference in the two. Nissan engineers basically took an already excellent 3.8-liter twin-turbocharged V6 engine and allowed it to breath better while at the same time tweaked various internals to gain an additional power. 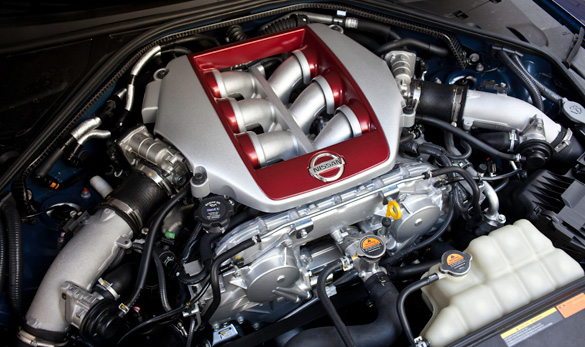 Naturally you would want to line the 2012 GT-R up against the 2013 GT-R and settle any disputes like men. Fortunately, that is exactly what we did once the drag strip was dry enough to get a good run in. Nissan setup an eighth-mile run with an additional 0-60-0mph run. Right out of the gate, without the assistance of the GT-R’s improved ‘launch control’, the 2013 model pulled ahead by at least a half car length. At the time, while behind the wheel of the 2013 GT-R, I was amazed how Godzilla had matured into an even angrier beast. Of course I went back for seconds -only this go around we enabled the infamous launch control, which is now programmed to reach 4,000 RPM while your left foot is on the brake and right foot is planted firmly to the floor. The shear thrust of all 4-wheels gripping the sticky drag strip is simply exhilarating. Blink your eye once and you would have reached clear past 60mph well under 3 seconds quickly approaching triple digits.

To bring things to a stop, the 6-piston Brembo brake calipers biting down on 15.35 inch front cross-drilled floating monoblock rotors and 4 piston rear calipers on 15.0 inch rear cross-drilled two-piece rotors do the duty without any fade. Even when braking from triple digit speeds, the massive steel brakes stood up to the test without any noticeable fade time after time. 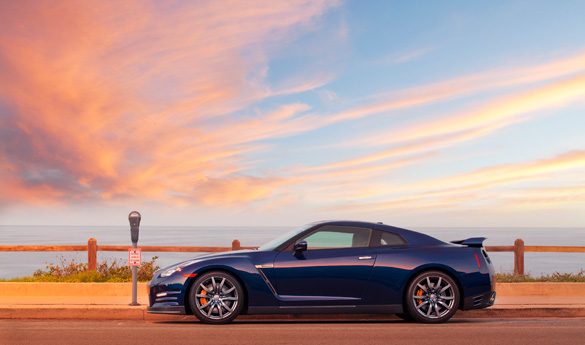 Who would have thought the Nissan GT-R could get any better? Of course 0-60mph times are not everything when it comes to a true high performance vehicle. That’s okay, because the new 2013 Nissan GT-R improves handling feel with higher spring rates, retuned Blisten DampTronic dampers with an added bypass valve, better intercooler breathing and new model-specific Dunlop tires are added to the equation. Other changes for the 2013-year GT-R include revised blue-color instrument cluster lighting and a new dry carbon fiber spoiler for the Black Edition.

The Nissan GT-R is undoubtedly a purpose built vehicle but it can serve as a daily commuter as well. You may not be able to fit two full-sized adults in the two rear seats, but you have just about enough room to stow your “stuff” on long trips. You also won’t find a plush or refined interior. Aside from all of the other interior details, such as the video-game inspired multi-function display, 11-speaker Bose stereo and standard backup camera, the 2013 Nissan GT-R is all about being a supercar. 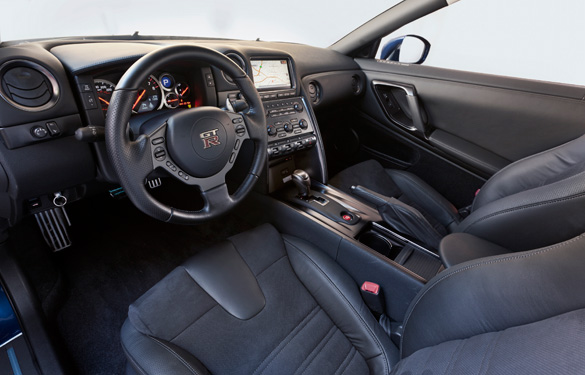 Over-all driving dynamics of the new 2013 Nissan GT-R are improved from the added power and refined suspension. Considering the GT-R’s not-so-slim curb weight of 3,829 pounds, the GT-R handles itself much like a car that weighs 400 pounds lighter. Of course having power vectored to all 4-wheels through the world’s first independent rear transaxle ATTESA E-TS all-wheel drive system, keeps things well balanced through the corners. This was evident when I first drove the 2009 GT-R several years ago but now the 2013 GT-R pushes the envelope even further. As accustomed to the GT-R, shifting of the 6-speed dual-clutch transmission allowed precise down-shifts and lightning fast up-shifts.

During the time on the autocross portion of our Nissan GT-R Experience, the GT-R proved to be nimble enough to toss around without too much intrusion from the stability management set in normal default mode. Putting the dampers, transmission and stability/traction control into race modes puts Godzilla into its most aggressive demeanor. In full race mode you can actually feel the GT-R swing out for a second before bringing almost 4,000 pounds back in line. Sometimes it just seems unbelievable that the GT-R can manage such law-defying maneuvers. After manhandling the GT-R around the autocross course the lateral G-force meter on the LCD touch-screen read over 1g many times even with a slightly wet track.

You will surely feel like a superhero after driving the new 2013 Nissan GT-R. The GT-R will make you feel almost like a professional racecar driver provided you are driving the GT-R with stability management in tact. Unfortunately, due to the high sense of security the 2013 GT-R gives you, it will not turn you into a better driver the moment you step into a different vehicle. The GT-R is a one-of-a-kind vehicle that literally leaves you in disbelief after pushing it to the limits. Finding the limit to the GT-R’s handling abilities is almost a task in itself. I have been on many other tracks in the past with vehicles having well-over 500 horsepower. Many of those vehicles would just scare you out of pushing it to the limit while the GT-R begs you to go faster. 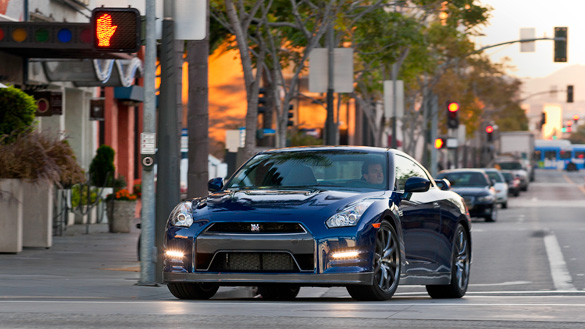 After meeting part of Nissan’s engineering team and discovering how the GT-R is evolving into the best supercar for the money, it is evident how Nissan is dead-set on improving the breed to not only compete with the competition, but to demolish it.

Is the new 2013 Nissan GT-R worth the increased base price of $96,820? It sure is. At least until the time comes where you can find another car that can perform just as well or better out of the box for this price.