Can A Hyundai Genesis Coupe 3.8 Outrun An Arrow? Video 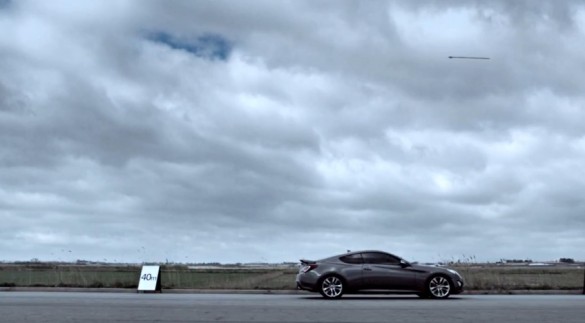 Many factors determine the speed of an arrow leaving a bow, including the weight of the arrow, the draw (and design) of the bow and wind conditions at the range. For the sake of argument, let’s just say that the average speed of an arrow as it leaves a bow is 83 meters per second, which translates to around 186 miles per hour.

That’s quite a bit faster than the top speed of a Hyundai Genesis Coupe, even the 3.8-liter version. Still, the arrow begins to loose speed almost as soon as it leaves the bow, thanks to wind resistance. Is it possible, then, for a car given a running start to out-run an arrow over a distance of about 100 meters?

We’d spoil the video if we gave away the answer, but ask yourself this: would Hyundai release the video if the Genesis Coupe couldn’t cross the line faster than the arrow?

We’re not sure the video proves anything, but at least it’s a car stunt we hadn’t seen before. We also don’t recommend you try to duplicate this video at home, especially if you drive a convertible.