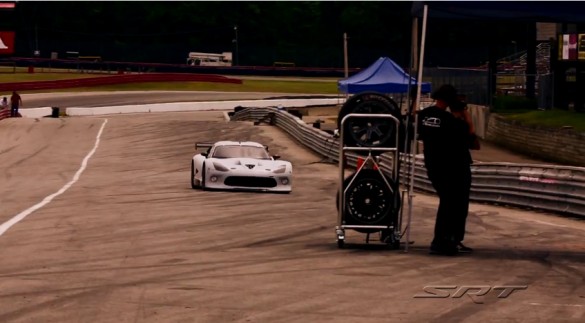 Racing is so important to the legacy of the SRT (formerly Dodge) Viper that division head Ralph Gilles introduced the American Le Mans Series GT spec Viper GTS-R concurrently with the road-going Viper at April’s New York Auto Show. While you won’t be able to take delivery of a Viper until late 2012 or early 2013, SRT was clear that it was going racing during the 2012 season, so the only question was, “when?”

Development partner Riley Technologies has made great progress in building and testing the Viper GTS-R, and now comes word that the car will make its competition debut at the Mid-Ohio Sports Car Challenge, scheduled for Saturday, August 4. Running in the ALMS GT class, it will be up against the seemingly-unbeatable Corvette C6.R, the BMW M3 GT, the Aston Martin Vantage, the Ferrari F458 Italia, the Lotus Evora and the Porsche 911 GT3 RSR.

Driving duties for the two team cars will be shared between Dominik Farnbacher, Marc Goossens and Kuni Wittmer, with IndyCar standout Ryan Hunter-Reay joining the team for endurance events. It’s not clear if the Viper GTS-R will run the four remaining ALMS races following Mid-Ohio, but SRT insists the cars will campaign a full season in 2013.

It will be good to see new Vipers back on the track, and we wish SRT and Riley Technologies all the best for the Viper GTS-R’s racing debut.