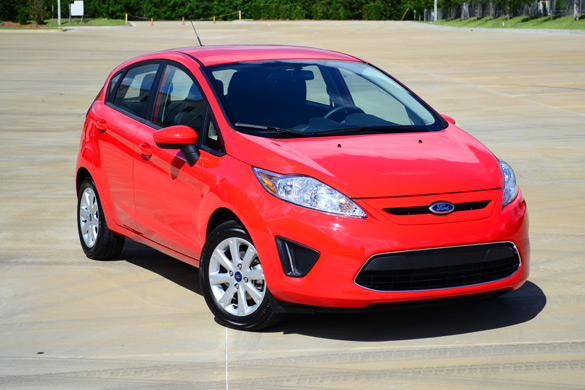 When it comes to the subcompact hatchback segment, Ford has an agreeable recipe in their new Fiesta. Available as a subcompact sedan or hatchback and entering into its second year in the U.S., the new Ford Fiesta offers up an economical yet sporty and refined style in a small package.

The Ford Fiesta, first introduced to the U.S. shores as a 2011 model firmly planting its European roots in American soil, combines excellent fuel economy, sporty looks, and a nice perception of quality. The new 2012 Fiesta may be rather small on the broad scale of currently available vehicles, but holds its own with a surprisingly adaptable interior. My 2012 Ford Fiesta SE 5-door hatchback test vehicle gave me and my 6 foot passenger up front plenty of space. Although it was nothing near as comfy as a typical luxury vehicle, it proved to be user-friendly. 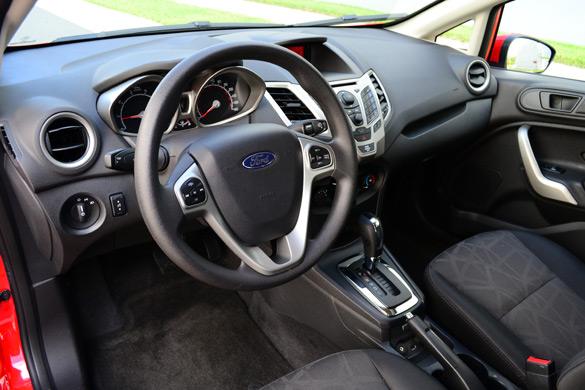 Finding the optimal driving position in the new 2012 Ford Fiesta takes a while but proves to eventually be easily attainable with a standard tilt/telescoping steering wheel and height-adjustable driver’s seat. The dashboard features a mix of soft-touch plastics and buttons with simplistic controls. However, when equipped with the voice-activated Sync system, navigating specific audio and information systems takes some getting accustomed to.  The red-backlit Sync LCD screen is bright and crisp and gives plenty of voice feedback commands for a wide range of voice interactivity. Pairing Bluetooth devices is a synch and getting additional data from the center screen is easier with voice than using physical dashboard buttons. 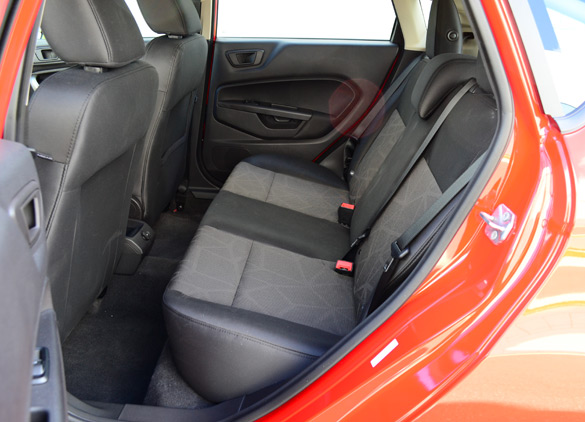 Rear seat room and cargo capacity is a bit short when compared to the competition such as the Honda Fit. The seats, front and back, have rather stiff padding but are never too harsh for trips lasting just a couple hours. In a 5-door hatchback configuration, the Fiesta is versatile enough for easy access for most items. The standard split 60/40 folding rear seats gives you just enough room to haul several medium-sized suitcases with a total of 26 cubic feet. 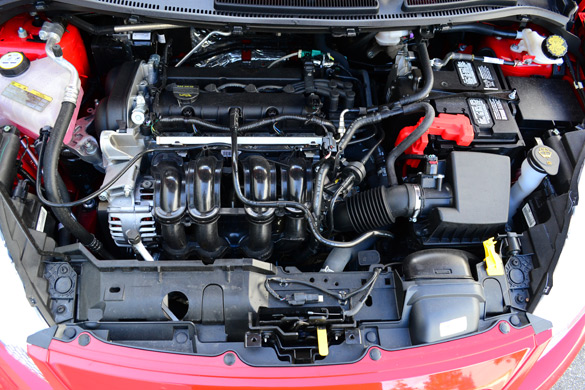 The new Ford Fiesta is powered by a 1.6-liter 4-cylinder engine with 120 horsepower and 112 ft.-lbs of torque. The engine is mated to either a standard 5-speed manual transmission or optional 6-speed ‘power-shift’ automatic transmission. My test vehicle is equipped with the automatic transmission, which is actually a dual-clutch setup. This particular transmission is somewhat quirky at times. Gear actuation and clutch engagement is controlled by an electronic unit instead of hydraulics proving to be fairly snappy on the up-shifts but seriously lagging in communicating with driver inputs. The 1.6-liter 4-banger is a decent and eager engine that seems somewhat sapped by the automatic transmission’s indecisive shifting. Although the dual-clutch automatic is good for fuel economy and quick shifting, it does not give you the ability to manually shift. An automated low-gear setting is almost like a sport mode, keeping the RPM near redline but still in the correct gear at just about any speed. Initial clutch engagement is smooth most times but I tend to notice the transmission not allowing much slip, which demonstrates the engine’s serious lack of low-end torque. 0-60 mph acceleration times come in around 11.3 seconds for the automatic transmission equipped Fiesta. You can expect to get well-over a full second faster to 60 mph with a manual transmission-equipped Fiesta, the obvious choice for even the light-hearted enthusiast. 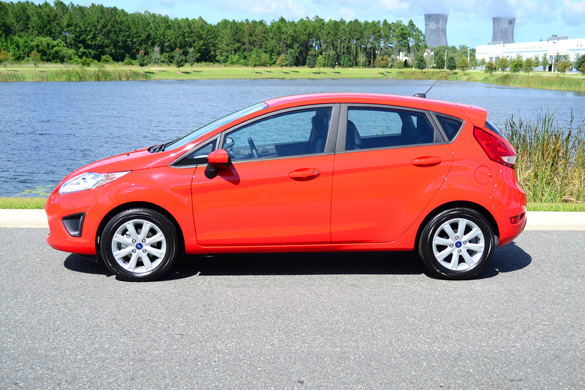 Fuel economy figures for my automatic 2012 Ford Fiesta automatic, 29 mpg city and 39 mpg highway, is slightly better than the manual transmission Fiesta getting 29 mpg city and 38 mpg highway. With either configuration, fuel consumption is quite consistent proving that the Fiesta is an excellent alterative to a much more expensive compact or even a compact hybrid vehicle. 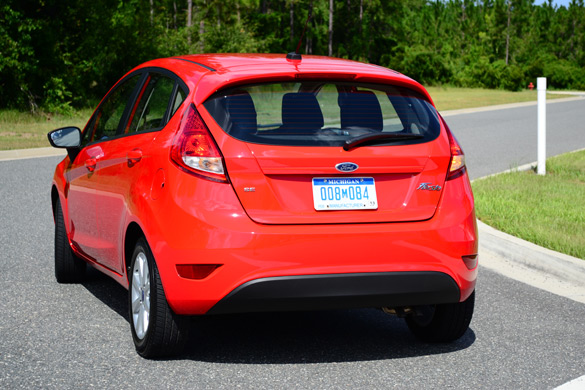 On the road the 2012 Fiesta feels sure-footed and stable as we noted in a previous review of the 2011 Fiesta SES 5-door hatchback. Steering feel is well-weighted and precise enough to manage spirited driving, something not easily attainable in the Fiesta. 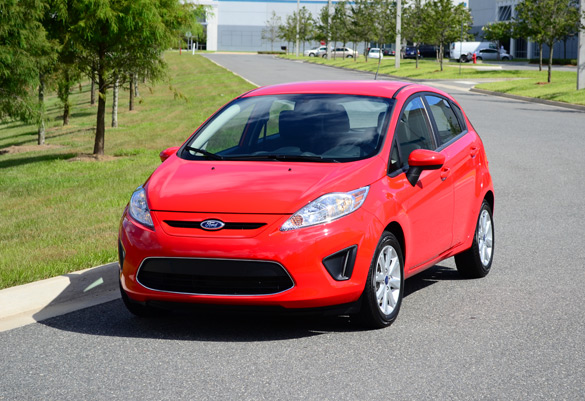 Frugal minded consumers will take a liking to the new 2012 Ford Fiesta at first sight of its sporty looks and low price. With much success in the European market for many years now, the Ford Fiesta embarks on an American journey to compete with stiff competition in the subcompact segment. For those tightening their belts during these difficult economic times, you will find economical-enjoyment in the new Ford Fiesta. Having a starting price of only $14,100 for the Fiesta S, combining exceptional fuel economy and sporty looks, the Fiesta is a substantial subcompact choice.