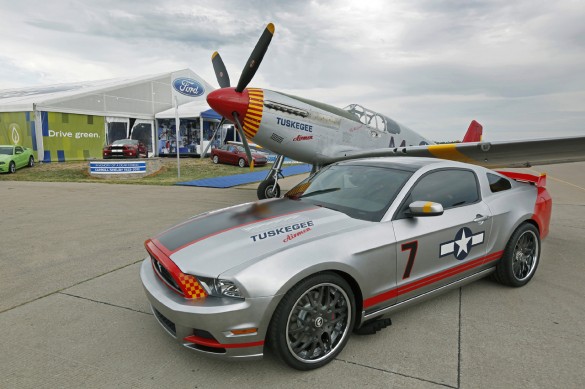 Ford’s engineers and designers have set out to come up with a one-of-a-kind creation to celebrate and pay tribute to the black Tuskegee Airmen who flew P51 Mustangs and bombers in World War II, aptly known as the Red Tails. Tomorrow, Ford will join an exclusive gathering at the EAA Air Venture in Oshkock, Wisconsin with its customized Red Tails Edition Mustang sporting a supercharged 5.0-liter V8 under the custom painted bonnet pushing over 600 horsepower.

The Red Tails Edition Mustang VIN 00051 will be auctioned off during the Eagles gathering to support the Young Eagles aviation program. Ford believes in paying homage to the historic paramount of the Red Tails as well as young enthusiasts who are given a chance to experience general aviation flying programs.

Hit up the video and full press release below for additional information.

All proceeds from the car donation and sale will benefit the EAA Young Eagles program, which has provided free introductory flights to more than 1.6 million young people since 1992, helping inspire and motivate the next generation of leaders, aviators and innovators.

“The perseverance and excellence displayed by the Tuskegee Airmen are qualities we also celebrate at Ford,” said Edsel B. Ford II, a member of Ford’s board of directors. “With this year’s beautiful ‘Red Tails’ edition Mustang, we’ve captured the recognizable symbols in honor of their important role in our history, and paired it with the innovation our Ford design and engineering teams build into all of our products.

“Through this project,” Ford added, “we take great pride in continuing our support for EAA and the Young Eagles organization.”

The Ford “Red Tails” Mustang GT celebrates and commemorates the contributions of the Tuskegee Airmen, comprised of the 332nd Fighter Group and the 477th Bombardment Group, during World War II. This courageous squadron of P-51 Mustang pilots was the United States’ first African American military airmen. Known for the red tails of their planes, the Tuskegee Airmen saw combat in more than 1,500 missions in World War II.

This one-of-a-kind car is secured under VIN 00051 in honor of the P-51 Mustang planes flown by the Tuskegee Airmen. The design of the modified 2013 Mustang GT 5.0-liter glass-roof coupe will unify the creative connection of the World War II fighters with a contemporary flair for the serious collector.

Unique interior details of this “Red Tails” Mustang include a modified navigation screen, instrument cluster and rear seat-delete. The car’s Recaro seats will include the embroidered “Red Tails” logo and floor mats embroidered with the 332nd Fighter Group logo. Additional features include a “Red Tails” script in the illuminated sill plates and puddle lamps that project “Red Tails” imagery when the doors open.

The Young Eagles Auction is part of the EAA Gathering of Eagles at the EAA AirVenture Museum. The Gathering of Eagles annually draws more than 1,000 aviation enthusiasts in support of Young Eagles and other EAA programs that inspire young people to become engineers, aviators, astronauts, scientists and innovators – the aviation pioneers of tomorrow.

“Ford is a longtime, committed partner of EAA and AirVenture, bringing value to those who make Oshkosh the pinnacle of their aviation year,” said Rod Hightower, EAA president and CEO. “These specialty vehicles allow EAA to provide support to its valuable programs and dedicated members in helping us grow the next generation of aviators.”

The “Red Tails” edition joins four other one-of-a-kind Mustangs created by the Ford design and engineering teams for the EAA Young Eagles Auction in recent years, each generating excitement among aviation and automotive enthusiasts alike. Ford vehicles sold at auction during past EAA AirVenture events have collectively raised more than $1.5 million to support Young Eagles.

During EAA AirVenture, Ford will offer attendees access to the latest advances in automobile technology at the Ford Hangar, as well as many of the industry’s most revered classics at the popular Cruisin’ Legends area on the grounds of Wittman Regional Airport. Ford activities include top-tier entertainment and interactive components that will add excitement for the hundreds of thousands of aviation fans in attendance.

To participate in the auction, candidates must prequalify by contacting Elissa Lines in the EAA Development Office, 800.236-1025; or email [email protected] by July 23. Visit www.airventure.org/gathering for more information.

About Ford Motor Company
Ford Motor Company, a global automotive industry leader based in Dearborn, Mich., manufactures or distributes automobiles across six continents. With about 166,000 employees and about 65 plants worldwide, the company’s automotive brands include Ford and Lincoln. The company provides financial services through Ford Motor Credit Company. For more information regarding Ford and its products worldwide, please visit http://corporate.ford.com.