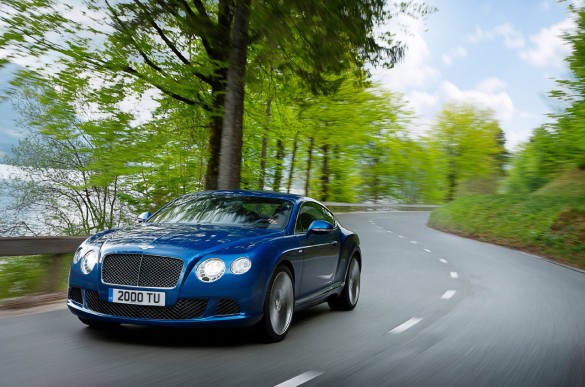 We finally get the full run-down on Bentley’s most powerful and fastest vehicle yet, the new 2013 Bentley Continental GT Speed.

Aside from the beefy 616 horsepower and 590 ft-lbs. of torque twin-turbo W12 engine mated to an 8-speed automatic transmission and 205 mph top speed, the new Bentley Continental GT Speed is actually a more efficient vehicle when compared to its predecessor, up to 12 percent in fuel economy to get a combined 19 mpg.

The new 2013 Bentley Continental GT Speed has a reworked powertrain with an advanced 8-speed tranny that can “block shift” to instantly shift from 4th gear to 8th. The re-worked platform combines a retuned suspension system with stiffer springs, upgraded control software, anti-roll bars and bushings. The new exhaust system brings about a deeper tone similar to that of the Continental Supersports. The massive braking system utilizes huge cross-drilled Carbon Silicon-Carbide (CSiC) rotors and 8-pot calipers with pads expected to last the life of the car.

In terms of evolution, the new 2013 Bentley Continental GT Speed may not look all that different from the outgoing model at a quick glance. Nevertheless, the fine details are where it makes ‘everything’ different and better at the same time.

(Crewe, England. 22 August 2012). Bentley is releasing full technical details of its exciting new 205 mph (330 km/h) all-wheel drive performance flagship ahead of its official international show debut at the Moscow Motor Show on 29 August. The new Continental GT Speed is the fastest road-car Bentley has ever produced and orders are being taken now, with deliveries scheduled to start in October 2012.

In the Bentley Speed tradition, outstanding performance is matched by an enhanced chassis with up-rated springs, anti-roll bars and bushes, a lowered ride height (by 10mm front and rear) together with re-tuning of the electronically controlled damping and steering systems.

However, this newest, most powerful addition to the Continental stable still displays the refinement and suppleness that makes a Bentley unique. Even the exhaust note, deeper and more exhilarating under hard acceleration, remains civilised and refined during high-speed cruising.

Its all-wheel-drive system, biased 60:40 in favour of the rear, offers reassuring stability and the potential to access the prodigious performance all year round in virtually any weather conditions or road surface.

The 575 PS (567 bhp) W12 powertrain of the Continental GT coupe and GTC convertible models also benefits from enhancements made to the more powerful GT Speed. In addition to the new engine management system and eight-speed transmission, all W12 engines now feature an energy recuperation system. Together, these deliver a 12% improvement in fuel economy and CO2 emissions across the GT W12 range and a 10% improvement for the GTC W12.

The W12 engine is mated to a ZF eight-speed transmission for the first time. Designed to handle the extreme levels of torque generated by the W12, the transmission cuts acceleration times by ensuring that the engine is always at the ideal speed for peak torque delivery. This state-of-the-art transmission also features “Block Shifting” technology, capable of shifting directly from (for example) 8th gear to 4th gear for instantaneous response and thunderous acceleration.

The combination of the new transmission and the uprated engine results in breath-taking supercar performance. The sprint from 0-60 mph takes just 4.0 seconds (0-100 km/h in 4.2 seconds) and the relentless acceleration continues to a top speed of 205 mph (330 km/h). 0-100 mph is dispatched in a mere 9.0 seconds – a level of performance akin to the previous generation Continental Supersports, and almost a full second quicker than the updated 575 PS Continental GT.

The exhaust system of the new GT Speed has been developed from the free-breathing, low back pressure design first used on the Continental Supersports Ice Speed Record car. The new exhaust produces a sportier, more intense baritone sound under hard acceleration without sacrificing a relaxed, refined and quiet tone during cruising conditions.

Up to 12% efficiency improvement for all two-door Continentals
Powertrain developments have not been restricted to the pursuit of outright performance. Bentley’s engineering team has also focused on enhancing efficiency, and the power and torque increases for the new GT Speed are accompanied by an improvement of up to 12% in fuel economy, range and CO2 emissions across the two-door model range.

The new eight-speed transmission delivers six per cent of the total efficiency gain. The eight close-ratios ensure that the engine operates in its most efficient range during relaxed driving, while the very latest software developments ensure that gear changes are both fast and imperceptibly smooth.

The new transmission, together with the ME17 engine management system, is fitted to the standard Continental GT and GTC models from now.

The W12 engine features recuperation for the first time, delivering a 1.6 per cent reduction in CO2 emissions alone. Recuperation is a technology involving precise control of the vehicle’s electrical system and alternator to allow flexible generation of electricity. The output of the alternator is increased during low engine load conditions, for example when decelerating, with the excess electrical energy stored in the car’s battery. When the engine is then under load, the alternator output is reduced, increasing overall engine efficiency while the battery provides the previously stored energy to compensate.

The self-levelling system constantly monitors ride height and damping according to road conditions, and positions the car with a ride height 10mm lower than the standard Continental GT. Bentley’s chassis engineers have also fitted stiffer suspension bushes for sharp, communicative handling and uprated anti-roll bars to optimise the handling balance.

Sophisticated stability control, optimised for driver involvement
The Electronic Stability Control (ESC) system has been optimised to work perfectly in tune with the new ME17 engine management system for outstanding driving performance. The ESC system retains the “Dynamic Mode” setting that allows increased wheel slip at higher speeds, with engine torque reinstated more quickly after a system intervention. Together, these systems give the spirited driver more opportunity to exploit the full potential of the new chassis setup and higher power output. Steering feel and feedback to the driver are both improved, while careful tuning of the Continuous Damping Control (CDC) system means minimal degradation in ride comfort despite the uprating of the suspension components.

All-wheel drive – a performance car for all seasons
For all Continental models, the new eight-speed transmission feeds the famous Bentley wave of torque to a permanent all-wheel-drive system which retains the 60% rear / 40% front torque split first introduced on the Supersports. Allowing the spirited driver to control the car’s line and balance using the throttle, the rear-biased torque split minimises understeer during hard cornering and varies torque between the front and rear axles for optimum grip. Meanwhile, the all-wheel drive system provides reassuring grip and traction in all road and weather conditions.

BODY DESIGN
Sculpted coachwork with signature Speed design cues
The iconic Continental GT has a form that expresses the same balance of power and elegance, exhilaration and endurance that is provided by its exceptional powertrain. The classic Bentley DNA is evident through the sensual powerline that runs the length of the car, meeting the sculpted rear haunch.

For the GT Speed, these elegant shapes are enhanced with a suite of signature design cues. A new 9.5J x 21″ ten twin-spoke wheel design is exclusive to GT Speed, available in bright painted or dark tint finishes, and fitted with 275/35 ZR21 tyres. Dark tint radiator matrix and front bumper grilles enhance the air intakes that pay homage to the Le Mans winning Bentleys of the 1920s to give the front of the new GT Speed a more aggressive, sporting look.

At the rear of the car, new rifled exhaust tailpipes are fitted exclusively to GT Speed and are complemented by chrome rear lamp bezels that are also introduced on Continental GT and GTC models. Also fitted as standard to all 6.0 litre Continental models are new W12 badges located below the muscular power line on the front fenders. Beneath the bonnet, the twin turbocharged intake manifolds of the Speed model are uniquely powder-coated with a black finish. GT Speed treadplates complete the set of exterior design cues.

Complementary features include carbon fibre door mirror cowls, the finishing of the standard rear spoiler in carbon fibre and the fitment of the 21″ “Elegant” wheels in a unique black finish.

As standard, the new GT Speed is specified with Bentley’s luxurious yet sporting Mulliner Driving Specification, which features diamond-quilted, perforated leather hides to all four seats, door trims and rear quarter panels. The cabin headlining is finished in indented leather hide, while optional embroidered Bentley emblems can be specified for the headrests.

With its gleaming, geometrically precise overlapping circles, engine-turned aluminium – also known as ‘engine spin’ – has indelible associations with Bentley sporting success. The dashboard of ‘Old Number One’ – the Speed Six that won two Le Mans 24 Hour races – is crafted from the same material. With such a pedigree it’s natural that Bentley offers two engine spin options for the fascia and consoles – one in Bright Aluminium and the other, unique to the Continental GT Speed, in Dark Tint Aluminium. Its understated shade perfectly complements the dark tint chrome radiator and bumper grilles.

Seventeen different hide colours are available and as with the rest of the Continental family, the interior of the GT Speed can be specified with duo-tone colour splits, including one split previously exclusive to GT V8. Contrast stitching throughout, including to the steering wheel, is also available.

ADVANCED INFOTAINMENT TECHNOLOGY
A new feature of the advanced 8-inch touchscreen, 30GB on-board Infotainment system is the addition of satellite navigation “Personal Points of Interest”. This allows the user to save places of their choosing (e.g. a specific restaurant) into the system.

The touchscreen displays the car’s audio system, telephone, ride and comfort settings and navigation information, which uses both the hard-disc drive and a DVD player to access route data.

Music can be played and controlled directly from an iPod® as well as from a six-disc CD changer, SD card reader or directly from the car’s hard-disc drive, which can store up to 15GB of music. DAB digital radio is also available in regions where the infrastructure supports it.