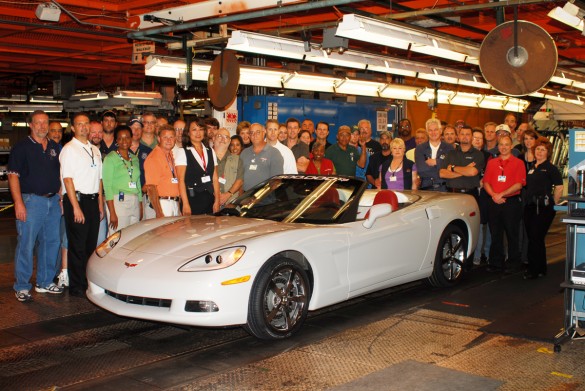 If you’re going to be in the Bowling Green, Kentucky area after September 13 and want to arrange a tour of Chevrolet’s Corvette assembly line, we’re sorry to report that you’re (temporarily) out of luck. In order to gear up for the start of C7 Corvette production, the plant will stop public tours on September 14, resuming them at an unspecified point in the future.

According to The Detroit News, some 40,000 to 50,000 visitors tour the Bowling Green Assembly Plant annually, usually in conjunction with a visit to the adjacent National Corvette Museum. The museum won’t be impacted by the plant changeover, although Corvette buyer’s tours are also on hiatus for the time being. We assume that owners can still purchase the $500 photo album of their Corvette being born, and we also assume that new car deliveries at the Corvette Museum will continue.

The 2014 Corvette is perhaps the worst-guarded secret in GM’s recent history. While the automaker has gone to great lengths to ensure secrecy, Jalopnik once published renderings of the car, thought to be accurate, based on leaked insider information. More recently, a supplier inadvertently published CAD drawings of the C7 Corvette’s front end.

While details on the car remain scarce, there’s no shortage of internet rumor surrounding its design and launch. GM isn’t saying when the car will hit the market, but we expect to see it by mid-2013, debuting as a 2014 model.