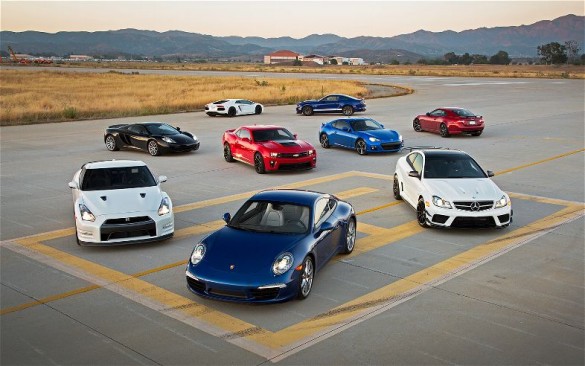 There are so many new performance cars that are drool-worthy and capable of being the best driver’s car in ones opinion. You have everything from the new Subaru BRZ/Scion FR-S, Nissan GT-R, to the new Camaro ZL1 and Porsche 911. Motor Trend took it upon themselves to find out what is the best driver’s car this year out of 9 selections. Among those selections you have the new McLaren MP4-12C, Porsche 911 Carrera S, Benz C63 AMG Black Series Coupe, Camaro ZL1, Lamborghini Aventador, Ford Mustang Shelby GT500, Subaru BRZ, Nissan GTR Black Edition and Jaguar XKR-S. I know what you are saying already; how do you even begin to compare the 200 horsepower BRZ to these beasts? Your guess is as good as ours. Though, the Subaru BRZ makes for a compelling argument how it is a true driver’s car – so why not include it except the fact that every other car beats the snot out of the BRZ in a straight line by over 2 seconds 0-60 mph.

The track of choice is the ultimate Mazda Raceway Laguna Seca, which is probably the best proving ground for finding out what you would take home for the best driver’s car this year.

Motor Trend sums up their reasoning for the selection of vehicles and the other question as to why there isn’t a Ferrari in the lineup. Well, Ferrari didn’t want to loan them a car. I guess Ferrari is treating everyone like Chris Harris these days. You will need to buy your own or drive a friend’s car if you want to test out an Italian stallion. One thing new and future owners of the Subaru BRZ and Scion FR-S can take home, is Motor Trend thought so well of the vehicle as to pit it against some of the most-sought after exotic cars costing well into 6-figures.

Check out the exclusive comparison video below and judge for yourself.