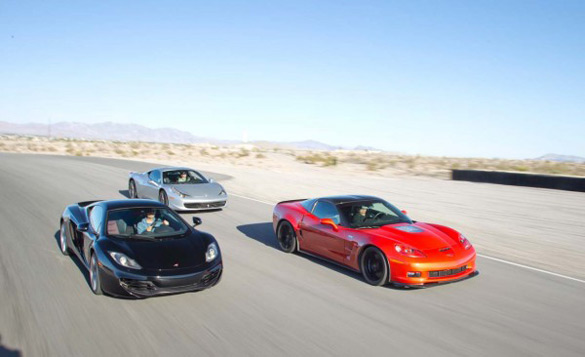 The new Corvette ZR1, Ferrari 458 Italia and McLaren MP4-12C are closely matched supercars. The three kings, as Road & Track calls them in their latest comparison video, are pitted against each other in a series of tests. Each of the vehicles has their own performance attributes and tends to lay down comparable horsepower numbers to the pavement through their rear wheels from a V8 engine. Road & Track took the three beastly vehicles out with the help of former IMSA champion Steve Millen and Hennessey Performance for some ‘testing’.

The 592 horsepower 3.8-liter turbocharged V8 McLaren MP4-12C is a one-of-a-kind supercar. The Ferrari 458 Italia’s 562 horsepower 4.5-liter naturally aspirated V8 screams just like its F1 siblings. The Corvette ZR1, costing over $100K less than its Euro rivals, remains to be the king of straight-line performance mainly due to its massive 6.2-liter 639 horsepower supercharged V8. Can the ZR1 hang with the European exotics in other tests? Hit up the full test video from Road & Track below to find out.