2013 Nissan Sentra Debuts with 40 MPG and Crosshairs on Corolla, Civic 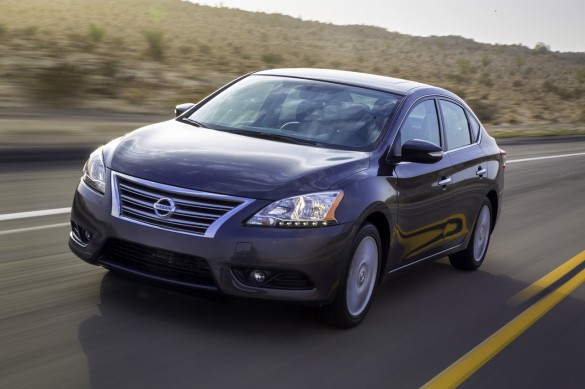 Although the Nissan Sentra is nothing much of a highly anticipated vehicle among enthusiasts, it still remains to be a relevant offering to consumers setting forth a glimpse into the evolution of economical transportation appliances.

The all-new 2013 Nissan Sentra gets many of its new design cues from its bigger 2013 Altima sibling incorporating Nissan’s new design language. The C-segment continues to be a major force to rekon with in today’s economic conditions and high gas prices. The new 2013 Nissan Sentra begs to be a top-choice for the compact vehicle market serving up to 40 mpg in a conservative package. Most Sentra models will yield 30 mpg city and 39 mpg highway. The extra efficiency for a total of 40 mpg on the highway can only be had in the FE+ trim variations. Trim levels for the new 2013 Nissan Sentra are the S, S FE+, SV, SV FE+, SR and SL. 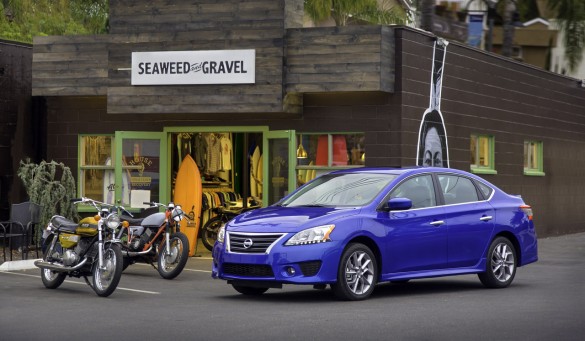 Powering the new 2013 Nissan Sentra is a new 1.8-liter producing 130 horsepower and 128 pound-feet of torque. Nissan is able to get away with using a smaller and less-powerful engine because the new 2013 Nissan Sentra is about 150 lighter than its predecessor. Additionally, a new CVT transmission is vastly improved to get the best bang for the buck out of the 1.8-liter 4-banger. 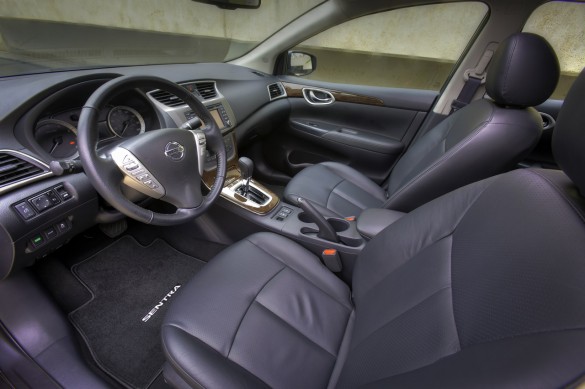 Nissan’s aim is more of a premium class interior for the new Sentra. Improved interior dimensions combined with a leather upholstery option will help in that aspect, too. Also to give the new 2013 Nissan Sentra an up-scale appeal, the new NissanConnect infotainment system will be available combining Bluetooth and Pandora streaming audio, NavTraffic, NavWeather, hands-free text messaging assistant, Navigation system w/ POIs powered by Google and Google Send-to-Car functions. 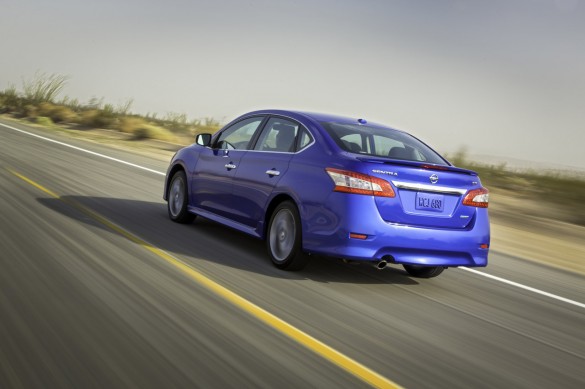 Pricing will be revealed as we inch closer to the new 2013 Nissan Sentra’s fall launch.

All-New 2013 Nissan Sentra Moves Up in Style, Sophistication, Refinement and Range with Up to 40 MPG Highway and 34 MPG Combined Fuel Economy

Like the recently unveiled Nissan Altima and Pathfinder, the redesign of Sentra focuses on class-above design standards inside and out, as well as efficiency in engineering. The new Sentra is 150 pounds – or five percent – lighter than the outgoing model, yet has slightly larger overall dimensions and more interior room. The lighter and more aerodynamic new Sentra allows Nissan to use a more fuel-efficient 1.8-liter engine, which along with the next generation Xtronic CVT® with sub-planetary gear helps deliver a 13 percent improvement in EPA combined fuel economy.

“The 2013 Nissan Sentra is the most revolutionary design in the nameplate’s 30-year history, a worthy addition to what is without question the most innovative, highest quality, highest value sedan lineup in Nissan history,” said Al Castignetti, vice president and general manager, Nissan Division, Nissan North America, Inc. “With the complete redesign for 2013, Sentra is closer in look and feel to Altima than a typical compact sedan. Like Altima, the new Sentra offers best-in-segment attributes, such as high fuel economy and easy-to-use connectivity, that offer real customer value and convenience.”

The new Sentra has a strong family resemblance to the recently introduced 2013 Nissan Altima, both in exterior and interior styling cues and its “class-above style” against competitive vehicles in the compact sedan segment.

Sentra’s all-new design is elegant, modern and refined, reflecting a “professional” character targeted at upwardly bound buyers who aspire to drive something more premium than some of the other designs in the segment. It adopts Nissan’s bold new signature trapezoid-shaped grille and large wraparound headlights with LED accents – the only sedan in the compact segment to offer them as standard equipment. In the rear, LED taillights are also standard, which complements the sophisticated styling.

Compared to the previous design, Sentra’s beltline has been lowered and a new character line has been added that runs from the front fenders, along the sides, and finishes at the sculpted taillights and trunklid, giving the new Sentra a more aggressive stance and enhanced outward visibility for passengers. Other exterior features include chrome door handles and accents, available heated outside mirrors with integrated turn signals, and available sport front and rear fascias and rear spoiler.

The 2013 Sentra is built on a new platform that is lighter than the previous design, contributing to the new model’s more than 150-pound weight reduction. It also helps Sentra provide one of the largest interior volumes in class, along with ample rear seat legroom and enhanced trunk capacity.

Compared with the previous generation Sentra, the 2013 model offers a 0.6-inch longer wheelbase (106.3 inches) and a 2.3-inch longer overall length (182.1 inches). The front overhang is shorter and the rear overhang extended. It is slightly lower in height (-0.6 inches) and narrower in width (-1.2 inches) for enhanced aerodynamics, yet offers nearly identical total interior volume (111.0 cubic feet versus the previous 110.8). The coefficient of drag has been significantly reduced to 0.29 from the previous 0.34.

“Sentra has long been known as one of the roomiest sedans in class and the latest iteration is no exception. The fine-tuning of its dimensions has created not only extremely well-balanced exterior proportions but enhanced rear seat legroom and created a larger, more usable trunk space,” said Castignetti.

Sentra’s sophisticated new look continues inside with a high-quality interior design with materials not usually found in compact vehicles, including soft-touch instrument panel and driver’s door armrest, available leather-appointed seating and available Maple wood-tone trim. Along with offering mid-size roominess in a compact-size exterior, the intuitive interior layout emphasizes driver control and class-leading seat comfort for all occupants. The instrument panel curves out towards the doors and features Fine Vision electroluminescent gauges that are backlit even in daylight, providing a high-quality look that is also easy to read.

Rear seat legroom of 37.4 inches is among the largest in class and immediately apparent to occupants, even with the front seats in the rear-most position. The rear seat is a standard 60/40 split folding design, offering versatile access to the 15.1 cubic feet of trunk space (2.0 cubic feet larger than the 2012 Sentra trunk).

“Nowhere is the new Sentra’s ‘class-above’ style more evident than in the interior. You notice it the minute you sit in the roomy, comfortable seats and when you touch the high quality materials. And when driving you notice the extra attention paid to isolating noise, vibration and harshness from entering the cabin,” said Castignetti. “And that’s before you even get into the various advanced technology features that you usually don’t expect in a compact sedan segment vehicle.”

NissanConnectSM with Navigation and Other Clever Technology

Like the new Altima, the 2013 Sentra offers a major step forward in technology that helps owners stay connected. An all-new version of the Nissan Navigation system is available. NissanConnectSM with Navigation includes a Hands-Free Text Messaging Assistant that reads incoming text messages and allows drivers to reply without taking their hands off of the steering wheel.

Other available technology ranges from the RearView Monitor and Nissan Intelligent Key® with illuminated push-button ignition switch to the Tire Pressure Monitoring System (TPMS) with Easy Fill Tire Alert feature. If air is being added or removed from a tire, the system signals the user when the recommended tire pressure has been reached by sounding the horn.

As expected from a ground-up redesign, the new Sentra features an all-new engine and CVT transmission. Now displacing 1.8-liters, Sentra’s advanced DOHC 4-cyinder engine offers a longer stroke than typical engines in its class, resulting in improved combustion speed and efficiency. The engine is equipped with a twin Continuously Variable Timing Control (CVTC) system which modulates both the intake and exhaust valve opening time (similar to that used on the flagship Nissan Maxima).

The engine’s internal friction has been reduced, improving efficiency. The DLC creates about half the friction of previous coatings. In addition, the valve springs are shaped similar to a beehive, with a smaller diameter towards the top – reducing inertia weight, improving valvetrain efficiency and smoothing engine operation. The engine is rated at 130 horsepower and 128 lb-ft of torque.

The new engine is matched with a new-generation Xtronic CVT® (a 6-speed manual is available in the base Sentra S model). The new CVT features a host of enhancements (versus the previous CVT) that contribute to an improvement in fuel efficiency and lower vehicle weight. It also offers a wider gear ratio of 7.3:1 through use of a sub-planetary gear and smaller pulleys, resulting in high-speed fuel efficiency at low rpm and responsive acceleration. Fuel economy is rated at 30 miles per gallon City, 39 miles per gallon Highway and a class-leading 34 miles per gallon combined with the CVT*.

“In the race for fuel economy bragging rights sometimes what gets lost in the mix is drivability. Sentra’s new engine and advanced CVT design are perfectly matched to provide the best of both mpg and driving enjoyment – smooth, quiet and efficient operation around town or highway cruising, responsive acceleration and excellent mpg and driving range,” said Castignetti.

A Range of Well-Equipped Models

The 2013 Nissan Sentra is offered in a selection of well-equipped S, FE+ S, SV, FE+ SV, SR and SL trim levels. All models come with standard Xtronic CVT®, except the base Sentra S that is available with a choice of 6-speed manual or CVT.

“From front LED accents to rear LED taillights and every inch in between, the all-new 2013 Sentra serves notice to compact sedan buyers that the Sentra is stepping up in style and stepping up in desirability,” said Castignetti. “In what has become one of the most competitive segments in the industry, Sentra is ready to take on all comers.”